Good to see Trump following through with his election promises “No more money for politicized science!”

And as for radical eco-activist groups like “The Sierra Club”, whose income stream relies on peddling eco-hysteria and climate alarm (supported by the activist EPA), they took fossil fuel money. Lots of it… 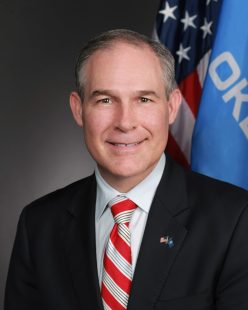 “We are delighted with President-elect Trump’s selection of Oklahoma Attorney General Scott Pruitt to head the U.S. Environmental Protection Agency (EPA).  Mr. Pruitt has led the charge in recent years to confront head on the enormous federal regulatory overreach proposed by the EPA as epitomized by the Clean Power Plan and Waters of the U.S. rule.  As a litigator, he also understands how environmental fringe groups like the Sierra Club and the NRDC – who are bankrolled by renewable energy tycoons like Tom Steyer and George Soros – use the state and federal court systems to essentially create new laws through such schemes as ‘sue & settle.’

It is also reassuring that President-Elect Trump has chosen someone from the state ranks, particularly a state so important to energy production, since it’s the states and their citizens who are suffering the most by this Administration’s out-of-control EPA.