Paris is a Parrot

EXCELLENT read. The climate scam and its associated schemes in 5 easy minutes…

“The Paris Accord is not dead, it is just resting.”

Lawrence Solomon of Energy Probe thinks the Paris Accord is a dead parrot, as he writes in the Financial Post: Paris is dead. The global warming deniers have won. Excerpts below with my bolds.

As Solomon sees it, events are unfolding in a way that proves Trump’s wisdom in withdrawing the US from the failing Paris Accord.

The Global Coal Plant Tracker portal confirmed that coal is on a tear, with 1600 plants planned or under construction in 62 countries. The champion of this coal-building binge is China, which boasts 11 of the world’s 20 largest coal-plant developers, and which is building 700 of the 1600 new plants, many in foreign countries, including high-population countries such as Egypt and Pakistan that until now have burned little or no coal. One graphic $ays it all: Who actually paid in to the Paris Green Climate fund?

Hard-earned US taxpayer funds diverted to third-world countries (often run by tin-pot dictators) via the unelected bureaucratic behemoth – the United Nations. What possibly could go wrong?!

Donald J Trump – protecting US incomes with accountability and transparency for its careful use where needed. And yet Trump’s the bad guy?!

Yeah, this is why President Trump said

“We will cease honoring all non-binding agreements”, and “we will stop contributing to the green climate fund”.

“I can not in good conscience support a deal that harms the United States”.

“The bottom line is that the Paris Accord is very unfair to the United States”.

“This agreement is less about climate and more about other countries getting a financial advantage over the United States”. 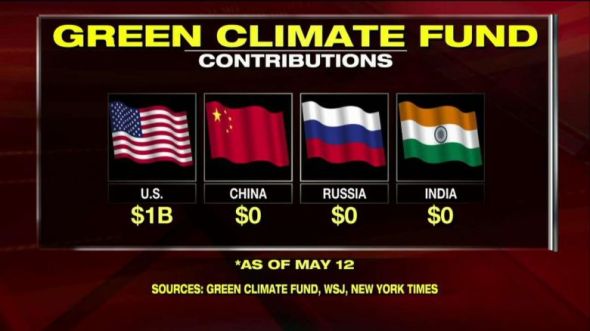 There Is No Climate Change Crisis

Image by Josh – Watts Up With That?

With the UN’s annual climate gabfest, held this time in exotic Marrakech, now done and dusted, it is worth drilling down on the exact “science” that these luxurious and opulent meetings are supposedly based upon…

Assessing the current state of the climate should be a necessary precursor to all ‘climate-crisis’ meetings in order to justify not only the hundreds of thousands of tons of carbon emissions emitted whilst jetting in the thousands of climate elites from every corner of the globe. But also to account for the millions upon millions of (your) taxpayer dollars spent in order to hold each lavish event.

25,903 participants had the time of their lives…

via NOT A LOT OF PEOPLE KNOW THAT

The following “State of the Climate” report via CFACT was presented by Climate Depot’s Marc Morano at COP22. Each point is, of course, backed up by real-world data and peer-reviewed science…

I would also add to the list, the stubborn and inconvenient fact that 97% of 102 UN-IPCC CMIP5 predictive climate models DO NOT accord with observed reality.

They are all running ‘too hot’.

This is problematic as these same unverifiable climate models form the basis of the literal trillions of dollars of taxpayer money that directly funds radical climate policy and the schemes and scams that go with it like misguided and “unreliable” energy solutions – wind and solar.

Decide for yourself if there is a so called “Climate Crisis” and just how are the estimated trillions of dollars, earmarked to de-carbonise the globe, supposed to change the weather or adjust the temperature of the planet, and by how much exactly? No one really knows.

If you feel CFACT’s list of peer-reviewed and scientific climate realities are “cherry-picked”, ask yourself why no UN climate ‘expert’ or anyone at a climate conference will ever dare discuss these points. Of course they won’t and can’t because each point fundamentally wrecks their climate narrative and political agenda.

Then ask yourself why Marc Morano and his CFACT delegation were forcibly censored and shut-down by UN security for presenting these pesky facts (in front of a life-size Donald Trump cutout no less! Gold).

Note to Marc and other dissenters of the preferred wisdom of climate theology: If you want an invite to a UN climate event, and wish to remain for the entire two weeks enjoying the inner-sanctum of climate groupthink, pampering and chatter, you best pack the preferred memes of the climate crisis industry and use them frequently – “the science is settled” and “97% of all scientists agree”. Both equally deceptive and thoroughly debunked climate memes aimed to stifle debate, intimidate and isolate.

“Science” is never settled, nor does science listen to or work through “consensus”.

What We Do Know About UN Climate Meetings and Radical Agenda

With such little evidence of a ‘climate crisis’, why does the UN insist the world spend hundreds of billions of dollars a year on futile climate

In Brussels February, 2015 she said, “This is the first time in the history of mankind that we are setting ourselves the task of intentionally, within a defined period of time, to change the economic development model that has been reigning for at least 150 years since the Industrial Revolution.”

In other words, the real agenda is concentrated political authority. Global warming is the hook.

Global warming has long abandoned any connection it has with actual science. It is has become as ideology. A new religion. Australia’s former Prime Minister Tony Abbott likening it to, “socialism masquerading as environmentalism“.

Figueres also added that “Communism is the best model to fight global warming.“

The shock election of Donald J. Trump as President-elect of the United States has put Green groups in a literal (money) spin…

The Marrakesh COP22 climate conference has ended – and green groups are just waking up that without US financial support, nobody has committed any money to anything.

“I’m a little worried by the lack of financial support to help poor countries adapt. This conference has been taking place in Africa, it was generally agreed that there should be more money, but in concrete terms unfortunately these decisions failed to materialise,” said Lutz Weischer, team leader on international climate policy at Germanwatch.

It is genuinely possible most of the members of groups like Greenpeace and Germanwatch really didn’t know where all the money was coming from. Sounds crazy, but think about it – all greens had to do in the past is make a lot of noise, and bundles of cash turned up. They never had any reason to question where the cash was coming from.

I suspect climate activists are only now waking to the horrible possibility that after years of partying on the US taxpayer’s dime, they really don’t have that many friends anymore.

The two week conference, catering for 25,903 participants was declared the “conference of action”. Which is why the Paris rule has been delayed to 2018!

What a waste of time and…’ carbon emissions’.

As with all climate conferences, kicking the can down the road was to be expected and who’s complaining with another guaranteed two years of champagne, foie gras and chatter at exotic locations, on the taxpayer dime…