Bureaucratic elitist hypocrites using other-people’s-money to fund their lavish ‘carbon’ intensive gabfests to protest against ‘carbon’, demanding everyone else curb their lifestyles.

You can’t make this stuff up.

For at least 21 years now, the U.N. and the IPCC have been ringmaster to a troupe of thousands. They perform at massive annual conferences held in exotic locations, serviced by top hotels and airlines, and funded largely, directly or indirectly, by reluctant taxpayers.

An estimated 45,000 attendees, including 114 from the Australian government, achieved nothing useful at Copenhagen and just more green tape in Paris. Each of these climate-fests is preceded by numerous meetings of bureaucrats drafting and redrafting their wish lists.

Now the U.N. Climateer-in-Chief, Ban Ki-moon, has jetted into the G20 summit in China to claim climate victory over climate skeptics.

Is there no end to this energy-wasting climate tourism? If they believe that the science is settled, no more conferences are needed.

The new global warming speedometer shows in a single telling graph just how badly the model-based predictions made by the Intergovernmental Panel on Climate Change have over-predicted global warming.

The speedometer for the 15 years 4 months January 2001 to April 2016 shows the [1.1, 4.2] C°/century-equivalent interval of global warming rates (red/orange) that IPCC’s 1990, 1995 and 2001 reports predicted should be occurring by now, compared with real-world, observed warming (green) equivalent to less than 0.5 C°/century over the period.

RSS and UAH monthly near-global satellite lower-troposphere temperature anomaly values for each month from January 2001 to April 2016 were assumed to be broadly accurate and were averaged. The least-squares linear-regression trend on their mean was determined and found equivalent to 0.47 C°/century.

“We’ve got to ride this global warming issue.
Even if the theory of global warming is wrong,
we will be doing the right thing in terms of
economic and environmental policy.
“
– Timothy Wirth,
President of the UN Foundation

There has been no statistically-significant Global Warming for 17-23 years despite 35% of all human CO² emissions, since 1751, emitted in the last 15 years.

Peer-Reviewed studies that confirm the lack of any recent global warming :

“The Oceans Ate My Global Warming”

With no rise in atmospheric temps over the past 15-17 years, the latest bluff in climate alarmism is that the ‘missing heat’ is hiding at the bottom of the oceans. However since 2003, 3000+ ARGO satellite buoys which descend to depths of 2,000 metres, continually recording ocean temperatures, have not detected a rise in ocean temps either.

Kevin Trenberth theorises that missing heat takes a dive into deep oceans. “The oceans can at times soak up a lot of heat. Some goes into the deep oceans where it can stay for centuries [and where lamentably, there are no reliable temperature measurements].  But heat absorbed closer to the surface can easily flow back into the air.” Yet sea surface temperatures and the upper heat content didn’t increase over the last decade by enough to account for the “missing heat” that those greenhouse gas emissions should have trapped in the Earth’s climate system but couldn’t be found. (via Forbes) 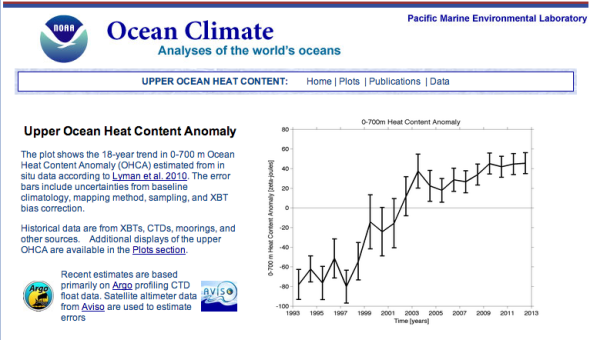 Shock News : UN Climate Delegates Unaware That The World’s Temperature Data Has Been Tampered With.