“The common enemy of humanity is man.
In searching for a new enemy to unite us, we came up
with the idea that pollution, the threat of global warming,
water shortages, famine and the like would fit the bill. All these
dangers are caused by human intervention, and it is only through
changed attitudes and behavior that they can be overcome.
The real enemy then, is humanity itself.”
– Club of Rome,
premier environmental think-tank,
consultants to the United Nations

Topher works out that Labor’s global warming policy would after 10 years cut the world’s temperature by 0.00005 degrees at a cost of $160 billion.

The global warming faith has robbed our politicians of all reason.

Topher interviews Joanne Nova, a veteran science communicator and regular commentator on the ABC and many other places. Joanne speaks of her own journey and how she went from being a ‘veteran believer’ in Global Warming to being the high-profile skeptic she is today.

Topher interviews David Evans, former modeler for the Australian Greenhouse Office, now prominent skeptic. He explains the reasons for his change of mind and why he’s so become so vocal on the issue.

Topher interviews Christopher Essex, Professor of Applied Mathematics, who promptly ‘flips the checker board’ with questions about the very validity of such a thing as ‘Global temperature’.

Topher interviews Marc Morano, accused ‘criminal against humanity’ and alleged ‘central cell of the climate denial machine’ and gets an insiders look into the politics and collateral damage caused by clumsy political responses to fears about climate change. 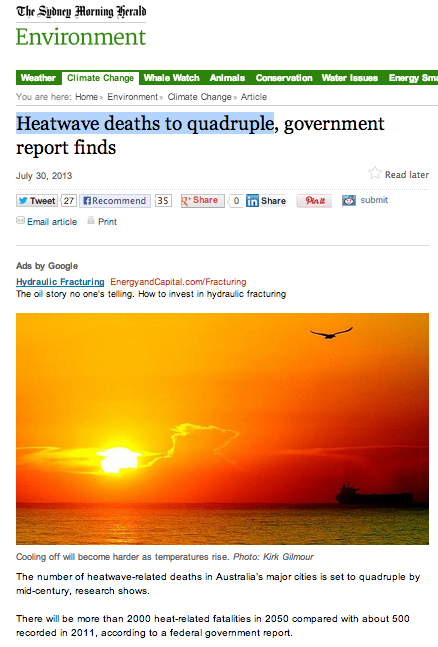 The success of Australia’s Carbon Tax has meant that global temperatures have not risen over the past 15 years despite Australia’s evil CO² emissions continuing to rise over the same period 1998-2011.

Note China’s CO² emissions have increased by 300% over the same period 1998-2011. However, their talk of an emissions trading pilot scheme has also played a crucial role in halting the rise of atmospheric temps over the past 15 years.

RSS data shows how BIG Government, EPA regulations, green schemes, green tape and trillions of dollars of your money are working together to save the planet from catastrophic global warming.  Wood for Trees: Interactive Graphs

Despite soaring evil-CO² emissions, there has been no warming trend in Australian summers since satellite (UAH) records began.

Even though global temperatures have not risen over the past 15 years and there has been no warming trend in Australian summers since (UAH) satellite records began, we must not be complacent. We must continue to listen to emperor Rudd’s Government and Deputy Anthony Albanese, who warn us that by 2050 evil CO² related Global Warming (aka Climate Change) heat-related deaths will quadruple.

By 2050 ‘No child or pensioner will die of a heat-related illness’ and we will thank emperor Rudd’s Labor government for linking Australia’s carbon tax and energy prices to the European emissions trading scheme (ETS) – cutting the world’s temp even further and eliminating Australia’s “Angry Summers” forever.

Statistics and historical evidence show cold related deaths far outweigh those caused by heat by more than double. However if your government makes electricity unaffordable through draconian climate policy; Carbon Taxers, ETS air trading and heavily subsidised green schemes, you might expect heat related deaths to increase as societies most vulnerable are unable to afford air-conditioning. Heat related deaths would certainly rise if AC is regulated or banned altogether as recommended by UN bureaucrats and those members of the comfortable western climate change elite brigade.

The Facts on HEAT versus COLD related deaths:

There’s a new essay from Indur Goklany in response to a recent Reuters news article.

Yesterday Reuters reported on a study which claimed that heat is the deadliest form of natural hazard for the United States. However, this result is based on questionable data.  The study used results for mortality from extreme heat and cold that can be traced to the National Climatic Data Center. But these data are substantially different from mortality data from the Center for Disease Control (CDC) based on the Compressed Mortality File for the United States. The latter uses death certificate records, which provide the cause of each recorded death (based on medical opinion). It is reasonable to believe that regarding the cause of death, particularly for extreme cold and heat, medical opinion as captured in death certificate records is more reliable than determinations made by the meteorologists in the National Oceanic and Atmospheric Administration’s NCDC (even if they have Ph.Ds.).

The essay draws on data from the CDC database of mortality in the USA. See this table:

Combining data from the CDC database for extreme cold and extreme heat, and various arms of the National Oceanic and Atmospheric Administration for floods, lightning, hurricanes, and tornadoes, Goklany has shown that extreme cold, rather than heat, is the deadliest form of extreme weather event. In fact, from 1979-2002, extreme cold was responsible for 53 percent of deaths due to all these categories of extreme weather, while extreme heat contributes slightly more than half that (28%).  For more, see The Deadliest U.S. Natural Hazard: Extreme Cold.

Of course we all know that the human race has historically done better during warm periods. While we’ve seen a sloght warming in the last century, we’ve also seen a worldwide improvement in the human condition.

Also this:
In an article entitled, “The impact of global warming on health and mortality,” published in the Southern Medical Journal in 2004, W.R. Keatinge and G.C. Donaldson of Queen Mary’s School of Medicine and Dentistry at the University of London note:

“From 1979 to 1997, extreme cold killed roughly twice as many Americans as heat waves, according to Indur Goklany of the U.S. Department of the Interior,” Singer and Avery write. “Cold spells, in other words, are twice as dangerous to our health as hot weather.”

THE CHANGING OF THE GOAL POSTS:

During the 1970’s the Global Cooling scare was to bring drought and starvation:

“The new climatic era brings a promise of famine and starvation to many areas of the world”, the report warns.

A return to cooler temperatures in today’s fragile, . interdependent global economic structure would mean that India, China and the Soviet Union’ — among other northern hemisphere nations — will be hard pressed to feed their populations.

The report notes that’ “the change of climate is cooling some significant agricultural areas and causing drought in others. If, for example, there, is a northern hemisphere drop of one degree centigrade, it would mean that India will have a major drought every four years and can only support three-fourths of her present population”.

“The world reserve would have to supply 30 to 50 million metric tons of grain each year to prevent the death of 150 million Indians”, the re port said.

The report, which was concerned with possible political and economic threats the United States could expect from such drastic events, said the starvation and famine would lead to social unrest and global migration of populations.

Want to read something really interesting? Compared Figure 4-1 in the State of Australian Cities report with the original source which is a 2011 Pricewaterhouse Coopers report. The caption for Figure 4-1 claims it shows projected annual heat related deaths but it doesn’t, it shows “extreme heat events” which are “rare”. In other words it shows projected deaths from rare severe heat waves. Australia has only had ONE in the last 70 years and that was in 2009.