Y2K Was A Period Of New Beginnings For Global Warming Fraud

As of 1998, there wasn’t anything scary happening to the climate. But then everything changed. The animation below switches between Jones et al 1998, and Mann’s hockey stick.

Around that same time, Hansen did the same thing to the US temperature record.

Experts tell us that this is all good science. They also receive $29 billion per year from the government to push this abomination.

This is the Citarum River in Indonesia 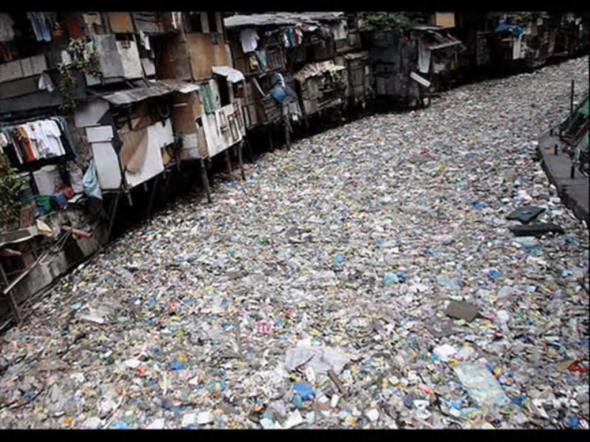 Which one do green focus on? They focus on the invisible non-pollutant, instead of the actual critical pollution problem.

Climate Skeptics often cite the fact that renewables like wind and solar don’t have constant power flow, and thus need either a nuclear, hyrdo, or coal/gas power plant backup in order to deliver a reliable power supply to the electrical grid.  Proponents often retort with “all we need is better battery technology to store power”.

Pick up a research paper on battery technology, fuel cells, energy storage technologies or any of the advanced materials science used in these fields, and you will likely find somewhere in the introductory paragraphs a throwaway line about its application to the storage of renewable energy.  Energy storage makes sense for enabling a transition away from fossil fuels to more intermittent sources like wind and solar, and the storage problem presents a meaningful challenge for chemists and materials scientists… Or does it?

HEADS need to start rolling at the Australian Bureau of Meteorology. The senior management have tried to cover-up serious tampering that has occurred with the temperatures at an experimental farm near Rutherglen in Victoria. Retired scientist Dr Bill Johnston used to run experiments there. He, and many others, can vouch for the fact that the weather station at Rutherglen, providing data to the Bureau of Meteorology since November 1912, has never been moved.

Senior management at the Bureau are claiming the weather station could have been moved in 1966 and/or 1974 and that this could be a justification for artificially dropping the temperatures by 1.8 degree Celsius back in 1913.

Surely its time for heads to roll!

Who’s going to be sacked for making-up global warming at Rutherglen? | Jennifer Marohasy

Massive Increase In Arctic Sea Ice Over The Past Two Years

State Of The Climate Report

Government experts tell us that the weather is getting hotter and more extreme, because it is their job to lie about the climate. Their job keeps getting tougher.

What Part Of This Isn’t Clear?

NASA has altered their own data to hide the decline globally. The animation below shows changes to published NASA global temperature data from 1981 to the present.

NASA has altered their own data to hide the decline in the US. The animation below shows changes to published NASA US temperature data since 1999.

NASA is hiding the decline the Arctic. The animation below shows recent changes to NASA published Iceland temperatures

The EU is faking the rise in sea level rise rates. The graph below shows recent changes to the published Envisat sea level graphs.

NASA is constantly altering data to create the appearance of warming. This shows changes to global temperatures in just the past two years.

These changes go on year after year. Always making the past cooler and the present warmer. The animations below show successive changes to NASA published US temperatures.

They are hiding the decline Texas. The…

Keeping Tabs On What Bill Gates Thinks About Sustainability

“By the time we see that climate change is really bad, your ability to fix it is extremely limited… The carbon gets up there, but the heating effect is delayed. And then the effect of that heat on the species and ecosystem is delayed. That means that even when you turn virtuous, things are actually going to get worse for quite a while.”

Mr. Gates actually got my attention earlier this week because of some comments he has made about our collective responsibility to address climate change and well as for a $5.4 million investment he personally has put toward addressing geoengineering technology that could combat the problem.

Keeping tabs on what Bill Gates thinks about sustainability – SmartPlanet 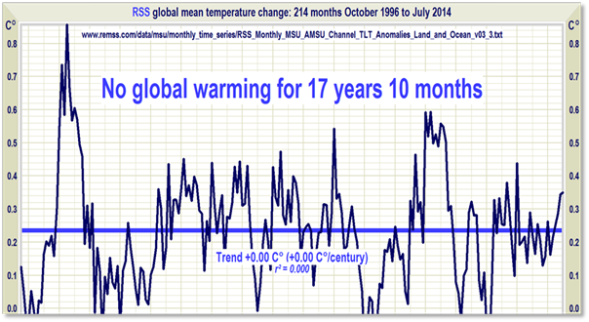 Global Temperature Update – Still no global warming for 17 years 10 months | Watts Up With That?

H/t to The Galileo Movement

Arctic sea ice is in a life-spiral and is highest extent in a decade, while global sea ice area has been persistently above normal for almost two years. So how does the monthly Serreze propaganda report begin?

Arctic sea ice extent declined at a fairly rapid rate through the first three weeks of July, but the loss rate then slowed due to a shift in weather patterns.

Translated to scientific terms – melting since July 1 (shown below in red) has been very slow, and ice extent threatens to cross to “above normal”

The 100% Consensus Of Clueless Arctic Experts

Every single Arctic expert has failed with their Arctic sea ice forecasts. For the past 7 years they have been calling me “breathtakingly ignorant” for calling them out on their idiotic Arctic predictions

NASA climate scientist Jay Zwally said: “At this rate, the Arctic Ocean could be nearly ice-free at the end of summer by 2012, much faster than previous predictions.” 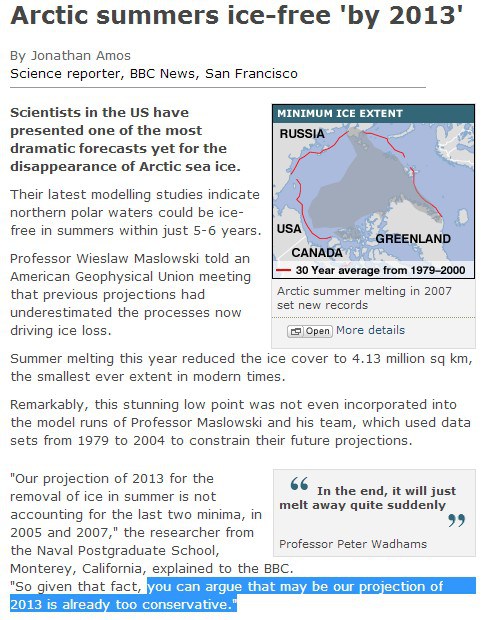 the Arctic will be ice-free in the summer of 2013

– John Kerry, US Secretary of State

Because climate change in the Arctic region is occurring faster and to a greater extent than anywhere else, the Arctic Ocean may be ice-free for a short period of time as early as the summer of 2015, according to the 2009 Arctic Marine Shipping Assessment Report completed by the eight…