US Drought Near An Historic Low

Climate experts tell us that the US is experiencing a near unprecedented drought, when in fact it is the exact opposite. US drought coverage is near historic lows.

Compare vs. 80 years ago

The progression of the Palmer Drought Severity Index for California over the past three years. Source: U.S. Drought Monitor

Is it true that we are in the worst drought in California history? Let’s look at the facts for the last 120 years (1895 to present).

As shown in this chart from the Western Regional Climate Center website (http://www.wrcc.dri.edu) — this is not even the 2nd driest water year for California in the last 120 years.

As for the claim that this is the worst multi-year drought in California history – look at the period of 1910-40 on the WRCC chart. Wow… that was really a dry 30 year period.

People Starting To Ask About Motive For Massive IPCC Deception

“Ten years ago I simply parroted what the IPCC told us. One day I started checking the facts and data – first I started with a sense of doubt but then I became outraged when I discovered that much of what the IPCC and the media were telling us was sheer nonsense and was not even supported by any scientific facts and measurements. To this day I still feel shame that as a scientist I made presentations of their science without first checking it.”
“There’s nothing we can do to stop it (climate change). Scientifically, it is sheer absurdity to think we can get a nice climate by turning a CO2 adjustment knob.”

Update: A guest post response, along with a comment from me has been posted, please see A big (goose) step backwards

Skeptics have done a reasonable job of explaining what and how the IPCC created bad climate science. Now, as more people understand what the skeptics are saying, the question that most skeptics have not, or do not want to address is being asked – why? What is the motive behind corrupting science to such an extent? Some skeptics seem to believe it is just poor quality scientists, who don’t understand physics, but that doesn’t explain the amount, and obviously deliberate nature, of what has been presented to the public. What motive would you give, when asked?

The first step in understanding, is knowledge about how easily large-scale deceptions are achieved. Here is an explanation from one of the best proponents in history.

After 35 years of unprecedented Mann-made melting, the area of sea ice on Earth is almost identical to 35 years ago.

Huge Increase In Autumn Snow Cover Over The Past 25 Years

Snowfall will become “a very rare and exciting event.”
“Children just aren’t going to know what snow is.”

Autumn snow cover has been steadily increasing towards record levels, and is up more than 30% since 1979. Experts are very careful not to talk about this, because it wrecks their fake little theory which keeps their funding coming in.

NSIDC : Pretending That The Satellite Era Began in 1979

NSIDC wants us to believe that satellite measurements began in 1979.

But satellite records go back much further, and showed ice gain in the 12 years prior to 1979. Paul Homewood found this quote from the CRU Director HH Lamb

Kukla & Kukla (1974) report that the area of snow and ice, integrated over the year across the Northern Hemisphere, was 12% more in 1973 than in 1967, when the first satellite surveys were made.

HH Lamb–“Climate: Present, Past & Future–Vol 2”–In Review–Part II « NOT A LOT OF PEOPLE KNOW THAT

From 1974 to 1979, the IPCC showed another large gain, based on satellite data which NSIDC ignores.

If NSIDC showed the complete satellite data set, people would know that Arctic behavior was cyclical, as we can see in the original GISS temperature graph from Iceland 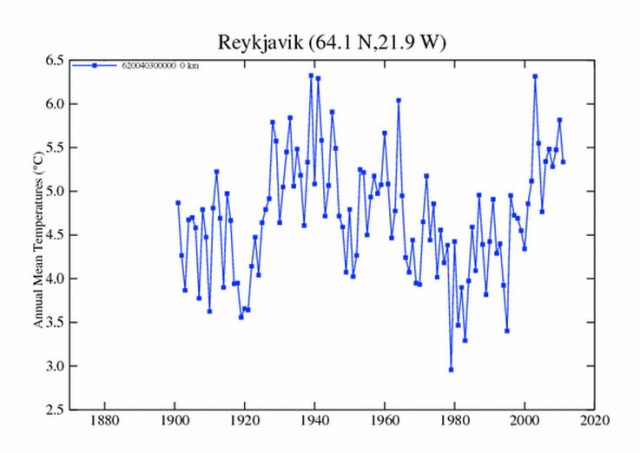 Hansen of course didn’t want us to know about this cyclical behavior, so he got…

No Change In New Zealand Temperature For 60 Years

Temperatures in New Zealand have been plummeting since 1998, and are cooler now than they were 60 years ago.

If The Facts Don’t Fit The Theory, Change The Facts

Regarding So called “Man made climate change”:

We are witnessing the biggest scientific scam in history.

If The Facts Don’t Fit The Theory, Change The Facts.

Climate experts say that a wavy jet stream and harsh winters are caused by global warming.

Just in case you forgot for a minute that climate experts have absolutely no clue what they are talking about.