Checking Up On Expert Projections

In 2007, the IPCC predicted with 100% confidence, shrinking sea ice at both poles. How did they do?

Sea ice at both poles has increased since the world’s leading experts made their forecast.

How Quickly The Past Changes At The New York Times

In 1988, global warming came into vogue, and the New York Times started helping to create the hockey stick by announcing that temperatures had risen steadily for a century

Temperature For World Rises Sharply In the 1980’s – NYTimes.com

This came right after the New York Times had spent 30 years reporting global cooling and a new ice age.

Only 13 years earlier, the National Academy of Sciences reported that there had been no net warming in the 20th century.

The Ministry of Truth has amazing powers at making the past disappear.

The year 1934 was far more extreme than anything we have experienced recently.

Maximum temperatures averaged the hottest in US history

Like the current February, temperatures in the east were extremely cold

The drought in the US during 1934 blew away all records, but it wasn’t just in the US – it was all over the world.

A survey of the threat of a world drought reveals ruinous losses by farmers in many parts of the world. There is an actual shortage of food, with young crops blasted in the ground by the scorching sunshine and thousands of cattle without pasture. The disaster…

Alarmists are out in force showing off their stupidity today.

Is There Anything Scientists Don’t Lie About, In Order To Hurt People?

Scientists are starting out the week lying about food.

The reality is that food production is at record highs, and prices have dropped due to low fossil fuel costs.

According to the Economist Intelligence Unit’s (EIU) Global Food Security Index, which is sponsored by DuPont, all-time high production levels of corn, wheat and soybeans and falling global oil prices have resulted in improved food security outlooks for 79 of the 109 countries in the Index.

However, the full impact of cheaper oil on local consumer prices, political stability, and on the fiscal positions of oil exporters and importers will only play out in the months to come.  “Supplies and stocks of the major grains are very strong, which will push global prices lower in 2015,” said Leo Abruzzese, Global Forecasting Director for The Economist Intelligence Unit. “The 60%…

Deniliquin has not only cooled since the 19th century, but the frequency of very hot days has also dropped dramatically.

BOM ignores all pre-1910 temperatures, because they don’t fit the global warming narrative.

Mark Twain Explains The Difficulty In Ending This Scam 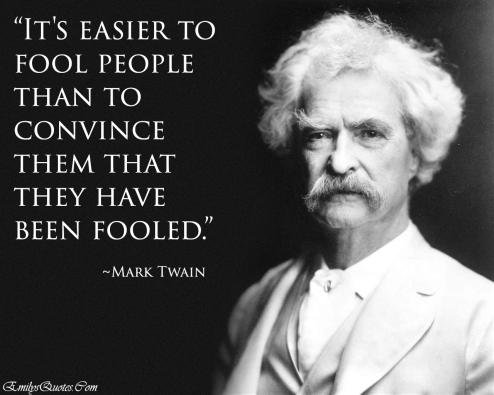 My historical and existing family grew up around Deniliquin. To have their temperature record trashed by global warming zealots abroad, in order to push their religious ideology/scam, is an unmitigated disgrace and yet another wicked blow to science and discovery.

Shame on you Gavin Schmidt, NASA, NOAA, USHCN and the Australian Bureau Of Meteorology for colluding with the global warming fraudsters via the  manipulation of historical temperature data.

Deniliquin is a small town located 270 km north of Melbourne and 370 km west of Canberra. It is one of the oldest stations in Australia and operated through 2003. The station showed a general cooling trend since the 1890s

Gavin made the cooling disappear a few years ago, and turned cooling into warming.

In order to hide the hot past, he knocked almost 2.5 degrees off of older temperatures.

This turned a sharp cooling trend into a strong warming trend.

Satellite photography shows that Deniliquin is fairly rural, but the station is in the middle of a neighborhood and was undoubtedly affected by the paving of the roads and growth of the town.

Mosher/Curry Say There Is No Urban Heat Island Effect

The effect of urban heating on estimates of global average  land surface temperature is studied by applying an urban-rural  classification based on MODIS satellite data to the Berkeley  Earth temperature dataset compilation of 36,869 sites from 15  different publicly available sources

We are told that the biggest sign of “climate change” is the rapidly warming Arctic, even called the World’s thermometer, proof that global warming cannot have stopped.

Certainly, the evidence of this from GISS is persuasive. 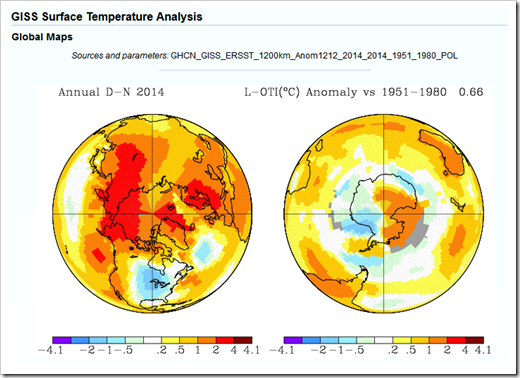 Yet it is well established that the Arctic warmed up rapidly during the 1930’s and 40’s, before temperatures plunged in the 1960’s and 70’s. James Hansen, himself, recognised this, as the graph below from his 1987 paper Global Trends of Measured Surface Air Temperature ,  showed.

So how much is what we have been seeing in recent years just part of that cycle? How much warmer is the Arctic now than it was 80 years ago?

Quite a lot, according to GISS. 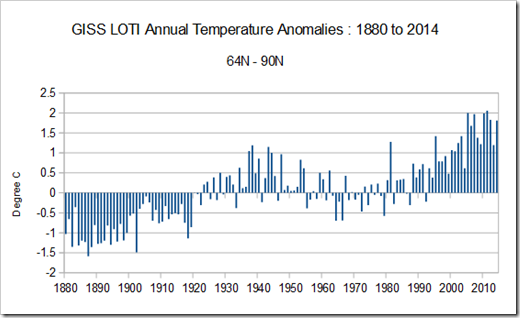 But can we trust their figures? We saw previously how the temperature history for Paraguay, and a large slice of the surrounding region, had been altered…