Ding-Dong, The witch is dead.

US president Donald Trump will honour his campaign pledge to pull the US out of the Paris climate agreement and defund UN climate programmes, a former adviser to the new administration has said.

Myron Ebell served as head of the Environmental Protection Agency’s (EPA) transition team from early September until 19 January, when he helped to draft an advisory action plan on how to implement Trump’s campaign promises.

At a press briefing held by the Global Warming Policy Foundation (GWPF) and the Foreign Press Association (FPA) in London today, Ebell declined to divulge any details of the EPA document on the grounds that it is confidential.

Fake News From The New Yorker

Fake news from the New Yorker:

Ako Salemi took the first photographs of his career when he was a teen-ager, growing up in northern Iran. His earliest subject, a river near his family’s home, is now mostly dirt. In Salemi’s native country, as in much of the water-scarce Middle East, climate change has led to desiccation. Lake Urmia, once the sixth-largest saline lake in the world, now has just ten per cent of the water that it contained in the nineteen-seventies. (Salemi’s childhood river was one of its tributaries.) The sea level along the country’s southern coastline, meanwhile, where most of its oil and petrochemical infrastructure is located, is projected to rise more than two feet by the end of the century, and by 2070 could flood the homes of more than two hundred thousand people annually. And yet Salemi told me…

Nice one Willis! Remember that original article well, referring to it often over the years ))

Four years ago I wrote a post called “The Parrotfish Should Be The National Bird“, about the critical place that the parrotfish plays in the life of both the reef and the coral atolls that depend on the reef. It was based mostly on my years of scuba and snorkel diving on the coral reefs of the South Pacific and watching the reef denizens including the parrotfish go about their daily lives.

As a result, I was glad to see a press release from last week entitled Study finds parrotfish are critical to coral reef health. In it, they analyzed sediment cores that were dated back almost to 1000 BC. Their results showed that the parrotfish, which graze on the algae that would otherwise overgrow the reef, are a critical part of the reef ecosystem. I did have to laugh about this paragraph…

Vahrenholt rails against the ‘climate priests’

“Vahrenholt mocked the government’s current strategy of trebling wind farm capacity as the wind cannot be predicted and their output fluctuates enormously. “Nil multiplied by x is still nil,””

At a mid-January meeting in parliament buildings in London, Professor Fritz Vahrenholt provided a very detailed monologue on the motivations behind Germany’s energy transition, and why he feels it’s misguided and potentially disastrous, writes Diarmid Williams.

Had the lecture been delivered by somebody from the coal power sector, they might have been written off as a ‘climate denier’, but given Vahrenholt’s background and pedigree as a backer of renewable energy, he is not so easily dismissed and his position must cause some unease for those so adamant that climate change is man-made.

From the “twice as expensive, half as reliable” department comes this paper from SPRINGER where they seemed to have figured out (finally) that wind and solar just isn’t all that good for reliable power. Their solution? Overbuild. To me, that’s laughable, because regional weather patterns (such as a rex block high) can easily shut down not just dozens, but thousands of wind systems over a large area. Likewise, a persistent low pressure system (such as a cutoff low) can make clouds and rain over a wide area for an extended period, making solar power next to useless. It doesn’t matter how many wind and solar plants you build, weather will still make it unreliable at times. – Anthony

Germany decided to go nuclear-free by 2022. A CO2-emission-free…

So record and increasing “CO2” emissions have led to a record lull in Atlantic landfall hurricanes, CAT3+, over the past decade.

And yet, the “Sun” is still largely a taboo topic by climate alarmists concerning its effect on climate.

Another study showing “CO2” is not the climate control knob, rather the “Sun”. But don’t tell this to climate alarmists, or you’ll be denounced a “DENIER”……to shut you up of course.

Hurricane Katrina [image credit: NASA]
Although some climate alarmists contend that CO2-induced global warming will increase the number of hurricanes in the future, the search for such effect on Atlantic Ocean tropical cyclone frequency has so far remained elusive, reports CO2 Science.

And with the recent publication of Rojo-Garibaldi et al. (2016), it looks like climate alarmists will have to keep on looking, or accept the likelihood that something other than CO2 is at the helm in moderating Atlantic hurricane frequency.

In their intriguing analysis published in the Journal of Atmospheric and Solar-Terrestrial Physics, the four-member research team of Rojo-Garibaldi et al. developed a new database of historical hurricane occurrences in the Gulf of Mexico and the Caribbean Sea, spanning twenty-six decades over the period 1749 to 2012.

Skeptics often get asked to show why they thinks climate change isn’t a crisis, and why we should not be alarmed about it. These four graphs from Michael David White are handy to use for such a purpose.

BoM also smoothed out (removed) 1940-1970’s cooling in many regions of AUS, as seen in the Cape Town record, to create an overall warming trend.

Playing around with my hometown data, I was horrified when I found what NASA had done to it.  Even producing GISTEMP Ver 2 was counterfactual.

The raw data that is fed to NASA in order to develop the global temperature series is subjected to “homogenization” to ensure that it does not suffer from such things as the changes in the method of measuring the mean temperature, or changes in readings because of changes in location. However, while the process is supposed to be supported by metadata – i.e. the homogenizers are supposed to provide the basis for any modification of the raw data.

The warmest years were in the 1930’s, as they were in many other parts of the globe. There was then a fairly steep decline into the…

The green energy experiment becomes sicker by the day. Energy poverty the only winner in the mad push for unreliable energy to “Save The Planet”.

Greens are outraged that ERM Power, an Australian electricity company, has chosen to pay a penalty for not buying green energy certificates, rather than “supporting” green energy companies.

Company says it’s cheaper to pay the penalty, but the move is branded as ‘undermining of the objectives’ of the renewable energy target.

The Clean Energy Regulator has castigated a major electricity company for choosing to pay a $123m penalty rather than build or contract new wind or solar power.

It said the move was “hugely disappointing” and customers would rightly be outraged to know the company wasn’t using money collected for investing in renewables in the proper way.

ERM Power has announced it will pay the regulator rather than buy certificates of green power generation to meet its renewable energy target obligations for 2016, citing tax reasons. 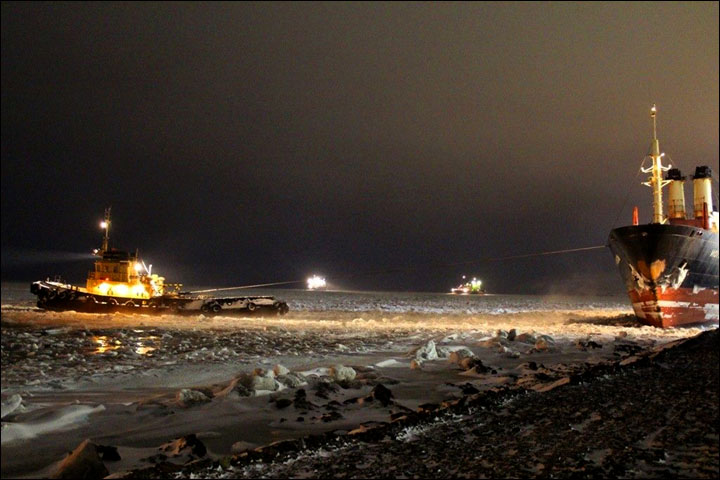 Vessels Kapitan Dranitsyn and Admiral Makarov ‘marooned’ in east for the rest of winter after getting trapped off Chukotka.

In the first such crossing since Soviet times, the convoy had earlier delivered supplies for the world’s first floating heat and power plant to be assembled in Chukotka, Russia’s most easternmost region, after a successful journey from Arkhangelsk to Pevek lasting from 14 December to 7 January.

The ease of the sailing was seen as a sign that climate warming in the Arctic can open up shipping lanes even in midwinter.  From the Siberian Times, Blow to Northern Sea Route as voyages of two icebreakers are… broken by ice

But, despite significant temperature rises across the northern latitudes in recent years, the vessels became quickly stuck in thick, compressed ice on their return journey.