Q and A Checklist : The Alarmist Claims of Eco-Extremist David Suzuki

Tonight the ABC hands over the “Q&A” stage to eco-extremist David Suzuki. Canadian environmentalist born 75 years ago with a deep sense of misanthropy who once compared human’s to “maggots” …

Will Q&A’s host Tony Jones or any member of the audience bother to correct Suzuki’s deeply alarmist rhetoric, correct the record or update his ideologically bent facts? Or does being a warming alarmist give you a licence to mislead?

Here are some of Suzuki’s epically alarmist and dangerously misleading claims:

In British Columbia, where I live, a warming climate has allowed insects the size of grains of rice to destroy $65 billion worth of pine trees in just a bit over a decade. For millennia the mountain pine beetle, a native of Canada, has been kept in check by our winter temperatures which reach minus 35 degrees for several days.

via Roger Franklin Quadrant Online: Geez, Dave, you’re a bugger for cherry-picking! You want us to publish the claim that climate change is killing lodgepole pines, but you’ve admitted elsewhere that poor forestry practices, monocultures and the suppression of fire, not just warmer weather, created an overabundance of the older trees those beetles love to eat, hence the population explosion. You can’t just leave out inconvenient facts, otherwise our readers would be misled.

Pine Beetle issues before human “maggots” had a chance to harm ‘Gaia’:

Science and brawn are to-day work-ing together in systematic haste in the heart of the yellow-pine forests ofSouthern Oregon and Northern California to save ten billion feet of merchantable timber from the relentless ravages of the Western pine beetle,writes the New York “Outlook.” During the last ten years this tiny beetle  (Dendroctonus brevicomis) has destroyed a total of 1,500,000,000 feet of  timber in unquestionably the finest stand of yellow pine on the Pacific coast of the United States.

The Last And Ugliest Part Of The Scam

Posted on September 8, 2013 by stevengoddard

The Arctic sea ice scam is in its death throes, and now the climate criminals are focused on the Antarctic is going to melt and collapse and drown us all in 90 years scam.

Only problem is, Antarctica is getting colder and sea ice is increasing 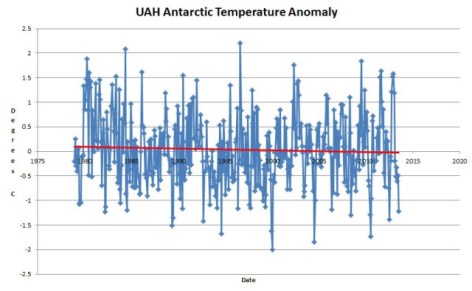 Planet Earth currently has 333,000 Manhattans of sea ice, which is more ice than on the same date in 1990. (Note that there was a small dip a few years ago which caused many leading scientists to become hysterical.)

Obama’s approval ratings are at historic lows, as well as his hurricanes.

Since Obama took office, the US has averaged 0.6 hurricane landfalls per year. This is the fewest hurricanes of any president since at least 1850. By contrast, Grover Cleveland’s presidency averaged more than five times as many hurricanes per year as Obama’s.

Hurricane Sandy was downgraded to a tropical storm when it made landfall. The resulting 3 meter storm surge, corresponded with a full moon, causing a King tide which led to extensive flooding of lower Manhattan.

September 3 marks the 190th anniversary of the Hurricane of 1821, which saw flooding and destruction in the growing metropolis. In less than an hour a thirteen-foot storm surge deluged the city, swallowing everything below Canal Street. The Battery was particularly devastated, docks were destroyed, and ships were swept onto streets. Further uptown, a bridge that connected Harlem to Ward’s Island was washed away and somewhere in Chinatown, the East River likely met the Hudson. “New Yorkers were lucky,” writes Bruce Parker in The Power of the Sea: Tsunamis, Storm Surges, Rogue Waves, and Our Quest to Predict Disasters. “The hurricane hit at low tide.“

The United States has had the fewest tornadoes on record – less than half of normal:

The major problems facing the Great Barrier Reef are to do with real pollution and physical factors; fertilisers and chemical pollution, damage from cyclone Yasi, development of coal terminals and from the crown of thorns starfish. Conditions far removed from perceived damage caused by increased Carbon Dioxide concentrations.

CORAL reefs can cope with natural disturbances like floods and cyclones …

And what exactly is damaging the reef? Brian Handwerk in National Geographic, June 8:

TERRY Hughes, who heads the Australian Research Council Centre of Excellence for Coral Reef Studies headquartered at James Cook University … (said) … “Coastal reefs have been obliterated by run-off of sediment, dredging, and pollution.”

GLOBAL TEMPERATURE HAS NOT RISEN IN OVER 15 YEARS:

Suzuki and ‘Expert Scientists’ newest claim to account for the atmosphere not warming:

“The Oceans Ate The Global Warming”

With no rise in atmospheric temps over the past 15-17 years, the latest bluff in climate alarmism is that the ‘missing heat’ is hiding at the bottom of the oceans. However since 2003, 3000+ ARGO satellite buoys which descend to depths of 2,000 metres, continually recording ocean temperatures, have not detected a rise in ocean temps either.

Kevin Trenberth theorises that missing heat takes a dive into deep oceans. “The oceans can at times soak up a lot of heat. Some goes into the deep oceans where it can stay for centuries [and where lamentably, there are no reliable temperature measurements].  But heat absorbed closer to the surface can easily flow back into the air.” Yet sea surface temperatures and the upper heat content didn’t increase over the last decade by enough to account for the “missing heat” that those greenhouse gas emissions should have trapped in the Earth’s climate system but couldn’t be found. (via Forbes)

Here’s a demonstration of how desperate warmists are to believe their theory, even when they can’t find the evidence for it:

According to the new IPCC report, temperatures rose by about 0.15C a decade for the latter half of the last century.  Since 1998, however, that rise has been reduced to only 0.05C.

”The heat is still coming in, but it appears to have gone into the deep ocean and, frustratingly, we do not have the instruments to measure there,” said Professor Ted Shepherd of Reading University. “Global warming has certainly not gone away.”

Wow. How convenient. The heat is hiding where the warmists can’t find it!

Enjoy tonights ‘Alarming’ edition of Q and A, and if it all gets a bit too much, keep in mind:

“Science is the belief in the ignorance of experts.” – Richard P. Feynman

David Suzuki on the very first question is revealed as a complete know-nothing. His questioner tells him that the main climate data sets show no real warming for some 15 years.

Suzuki asks for the references, which he should have known if he knew anything of the science.

His questioner then lists them: UAH, RSS, HadCrut and GISS – four of the most basic measurement systems of global temperature.

Suzuki asks what they are.

Anyone interested in global warming should know right there that Suzuki has absolutely no understanding of what he is talking about.

In my opinion he is a phoney.

Here, for Suzuki’s information, is the GISS measurement:

The very first question put to David Suzuki on Q&A last night revealed this warming alarmist’s complete ignorance of the most basic facts of global warming.

The only rational response to Suzuki’s astonishing admission of utter ignorance would have been to say to him: “Sir, you are a phony and imposter. Get off the stage and don’t waste our time for a second longer.”

Read the exchange for yourself:

David Suzuki bombs on Q&A, knows nothing about the climate 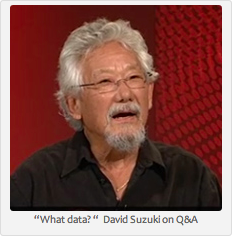 David Suzuki’s performance on Q&A last night was extraordinary. I was knock-me-over amazed that he has not heard of UAH, GISS, HADcrut and RSS, and knew nothing of the pause in global surface temperatures that even the UK Met Office and IPCC lead author climate scientists like Hans von Storch are discussing.

How afraid is Suzuki about man-made global warming? So afraid, it doesn’t occur to him to check the data, incredibly he doesn’t even know what the data is. Tony Jones had to rephrase the questions to explain them to Suzuki, who doesn’t even understand them.

Three times in Q&A he admitted he didn’t know — he didn’t know there was a pause in warming for the last 15 years, he didn’t know how global temperatures are measured, and he didn’t know that cyclones were not increasing over the Great Barrier Reef. He wants politicians jailed for “denying the science”. “You bet!” he exclaims, but then admits he hasn’t thought that through either. Keep Reading »