Coming soon to a suburb near you, compliments of the UN, Labor/Greens and Liberals

A 59-year-old woman attacked and held hostage in a home by up to a dozen African youths has lost the main connection to her husband who is in intensive care after a Christmas Eve heart attack.

A relative of the woman said she was grabbed, beaten, and forced to give up the code to her iPad after the youths smashed into the home in Hillside, in Melbourne’s west.

As the woman’s husband is in intensive care, she can only visit him for short periods and uses the iPad to keep in contact with him.

Just before 11.30pm Thursday, the woman went to let a pet dog out into the backyard, through a large double-glass door. When she pulled up the blinds, she was confronted with between eight and 12 youths of African appearance leaping over the pool fence toward her.

“So she ran. This window is double-glazed, and they’ve just smashed right through it,” said relative Paul.

“So she nearly made it to the front door, she tripped over our dog. But one got through this part of the window and grabbed her, smacked her in the mouth. Apparently he then opened the front door and there was another one.”

She was house-sitting for relatives Samantha and her husband Paul while they were away on holiday, they told The Age on Friday.

The woman was held hostage in her front room as the gang rampaged through the house, stealing an Xbox, shoes, and Christmas money one of the couple’s young children had collected before stealing their car. They smashed several walls and a television.

“Her husband had a heart attack Christmas Eve, and he’s in intensive care,” Paul said.

“She begged them not to take her iPad because that’s her connection to her husband.”

After the youths left, the woman staggered out of the house and contacted neighbours, who eventually called Paul and Samantha. The couple spent Friday mopping up a trail of blood and blocking over the smashed glass door.

“These cops I spoke to this morning, they are frustrated,” Samantha said.

“I said ‘I feel sorry for you guys, you do all the hard work, and it gets to the next level, and there is no consequences’.”

She said the police officers agreed with her.

“I just don’t know how they can bluntly come into people’s homes and grab onto things that aren’t even theirs. They don’t realise the impact they have on your spirit and the way you feel. I feel unsafe, I feel scared for my kids.”

The Age understands police have taken CCTV footage from a nearby house, as well as fingerprints from the crime scene.

The attack was part of a violent crime spree in Melbourne’s west, including home invasions and assaults, that police described as “thuggish and abhorrent”.

The number of young men involved is yet to be determined.  Victoria Police Commander for the north west metro region Russell Barrett said at a media conference on Friday, but all the victims had told police the offenders were of “African appearance”.

Commander Barrett said it was too early to determine whether the violence was linked to the same group of young offenders, however, it is likely they were given the crimes were committed within a few kilometres of each other. 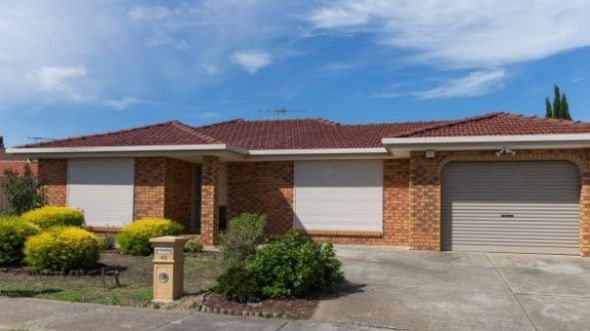 A Melbourne father belted black African home invaders with a baseball bat to keep them out of his home(above) on Coleridge Drive, Delahey after they made death threats.  Son, 18, gives chase in car but the thugs ran too many red lights for a pursuit to keep up. See comment at end of story. Photo: Paul Jeffers

A second home invasion took place just about 12.45am on Friday in Coleridge Drive, Delahey.

An 18-year-old victim of the home invasion said he was returning home from work about 12.45am when he found three young men attempting to smash their way through his front door as he pulled into the driveway.

He said the men were able to break the glass panel next to the door before his dad heard them and armed himself with a baseball bat inside.

“He just started hitting their hands with the baseball bat so they couldn’t undo the lock,” he said. “But as soon as I got there, they saw the headlights of the car, and they just started running I think they thought I was the cops or something.”

The father, also who did not want to be indentified, said one of the men managed to get into the house through the garage door and stole a mobile phone that was on the floor in the living room before fleeing.

He said another two men who were trying to smash their way through the front door were screaming “come out here, we’re going to kill you”.

“My wife was already in bed and she didn’t know what was happening,” he said. “I thought they were going to kill me, I just kept hitting them with the bat then my son got home. We feel really scared to be here now.”

The teenager said his 25-year-old brother and mother were also inside during the attack and the family would be installing security cameras this weekend.

“We’re all pretty shaken up and tired,” he said. “It’s made us feel like we aren’t even safe in our own home.”

The teenager said the three young men fled into a getaway car.

He pulled out of the driveway and chased after them.

“I wanted to get a car registration number or something I could tell police,” he said. “But they were driving so fast and running red lights, I couldn’t catch them.”

Other residents in Coleridge Drive say they’re living in fear, with cars and houses regularly broken into.

One resident, Samuel Momo, said his family no longer parked their cars on the street after his dad’s car was broken into a number of times last year.

Mr Momo said he wasn’t shocked by the latest home invasion in his neighbourhood.

“There was a gun shooting across the road from our house a few years back,” Mr Momo said.

“It’s almost like the norm here. I don’t think it’s a recent thing either, there’s always been a fair bit of crime. We keep the house locked up at night. Even if it’s a hot night, we might open a window to let a bit of air in but we turn off all the lights so nobody can see in.”

Another resident said he stepped out the front of his house last week to see his mum’s car has been “kicked in”.

“The windscreen was smashed, there was glass everywhere,” he said. “It’s a pretty common occurrence. At one stage it was happening (to cars in the street) about twice a week. Other times cars speeding down the street have ploughed straight into houses.”

The man who has lived in the neighbourhood  for seven years said while he felt there had always been an element of crime in the area, he had noticed an increased presence of teenagers on the streets at night in recent months.

Another resident who also did not want to be named said she never opened her windows or doors and kept her car inside her garage at all times.

“To be honest I don’t feel safe to do that anymore,” she said.

“It used to be such a lovely area but you hear things and you see things on the news and the paranoia and fear grows. When the police knocked on my door this morning to tell me about what happened down the street I thought “here we go again.”

Comment: This is a political problem initiated by the political party duopoly. Until you start demanding these worthless thugs be deported or executed you will have to put up with the problem.

The political party corporations will not allow you, as the first respondent to protect yourself by any means. Cairns News suggests you join a rifle or pistol club, buy a shotgun and arm yourselves in readiness. There will be no worthwhile help from police or the judicial system under present arrangements.

THE unprecedented cost of energy driven by the renewable energy target and the carbon tax had destroyed the nation’s competitiveness, Tony Abbott’s chief business adviser has declared.

Maurice Newman also says climate change policies driven by “scientific delusion” have been a major factor in the collapse of Australia’s manufacturing sector. “The Australian dollar and industrial relations policies are blamed,” Mr Newman said. “But, for some manufacturers, the strong dollar has been a benefit, while high relative wages have long been a feature of the Australian industrial landscape.”

In an interview, Mr Newman said protection of climate change policies and the renewable energy industry by various state governments smacked of a “cover-up”.

He said an upcoming review of the renewable energy target must include examination of claims made in federal parliament that millions of dollars were being paid to renewable energy projects that allegedly did not meet planning guidelines. Mr Newman’s comments follow those of Dow Chemicals chairman and chief executive Andrew Liveris, who said Australia was losing its natural advantage of abundant and cheap energy.

“As far as new investments go, our primary energy sources of natural gas and electricity are now or will soon become negatives to any comparative calculation,” Mr Liveris said.

“Average prices of electricity have doubled in most states in recent years and the unprecedented contraction in consumption threatens a ‘death spiral’ in which falling consumption pushes up prices even further, causing further falls in consumption,” he said.

Mr Newman said Australia had become “hostage to climate-change madness”. “And for all the propaganda about ‘green employment’, Australia seems to be living the European experience, where, for every ‘green’ job created, two to three jobs are lost in the real economy,” he said.

“The scientific delusion, the religion behind the climate crusade, is crumbling. Global temperatures have gone nowhere for 17 years. Now, credible German scientists claim that ‘the global temperature will drop until 2100 to a value corresponding to the little ice age of 1870’.”

“When necessary, the IPCC resorts to dishonesty and deceit,” he said.

“It could be hundreds of millions of dollars and we have a government that is keen to rein in the budget deficit,” he said. “If you can save a million dollars that should never have been spent, we should be doing it.”

Senator Madigan said the issuing of renewable energy certificates to one of the non-compliant wind farms, at Waubra in Victoria, reflected “a culture of noncompliance arising from systematic regulatory failure that impacts every wind farm in Victoria”.

He said the issue involved “the pain and suffering of little people living in rural Australia, environmental damage, fraud on a grand scale, deception, lies and concealment“.