“Of all tyrannies a tyranny sincerely
exercised for the good of its victims
may be the most oppressive.”
– C. S. Lewis

“Blind trust in authority
is the greatest enemy of the truth.”
– Albert Einstein

THE short video at the end of this post – “GASLIGHTING, UNENDING LOCKDOWNS AND CLIMATE CHANGE” – is what our children should actually be watching during their endless, state-enforced COVID19 lockdowns.

Maybe then, their year(s) of lost education may not be so lost.

You should also teach them how the unelected globalist bureaucrats at the WHO (funded by the global taxpayer) leave no stone unturned in their quest to rewrite history and science to further their malevolent ambitions :

And, then ask them if they would like to “own nothing” when they grow up, as stated by that other UN affiliate, the globalist WEF.

Snapshot taken from an actual @WEF tweet in 2016, now since deleted :

You can see the entire tweet deconstructed towards the end of this must watch, important and excellent short video by Irishman Dave Cullen …

(NB// The PayPal account linked to “Climatism” is “Five-O-Vintage”;)

SWISS Residents Are Wrapping Glaciers In Blankets To Keep Them From Melting!?

“Men are born ignorant, not stupid.
They are made stupid by education.”

This could reduce melting by as much as 70%. Read more: https://t.co/0aDT46y6B1 pic.twitter.com/HtFhKxkJn4

Every summer for the last eight years, people who live in the Swiss Alps have been wrapping a beloved glacier in blankets.

The white canvas blankets are intended to reflect sunlight off the Rhone Glacier, to try to reduce how much of it disappears each year. And Swiss glaciologist David Volken says it’s probably working; he told Agence France-Presse the blankets may reduce seasonal melting by as much as 70%. 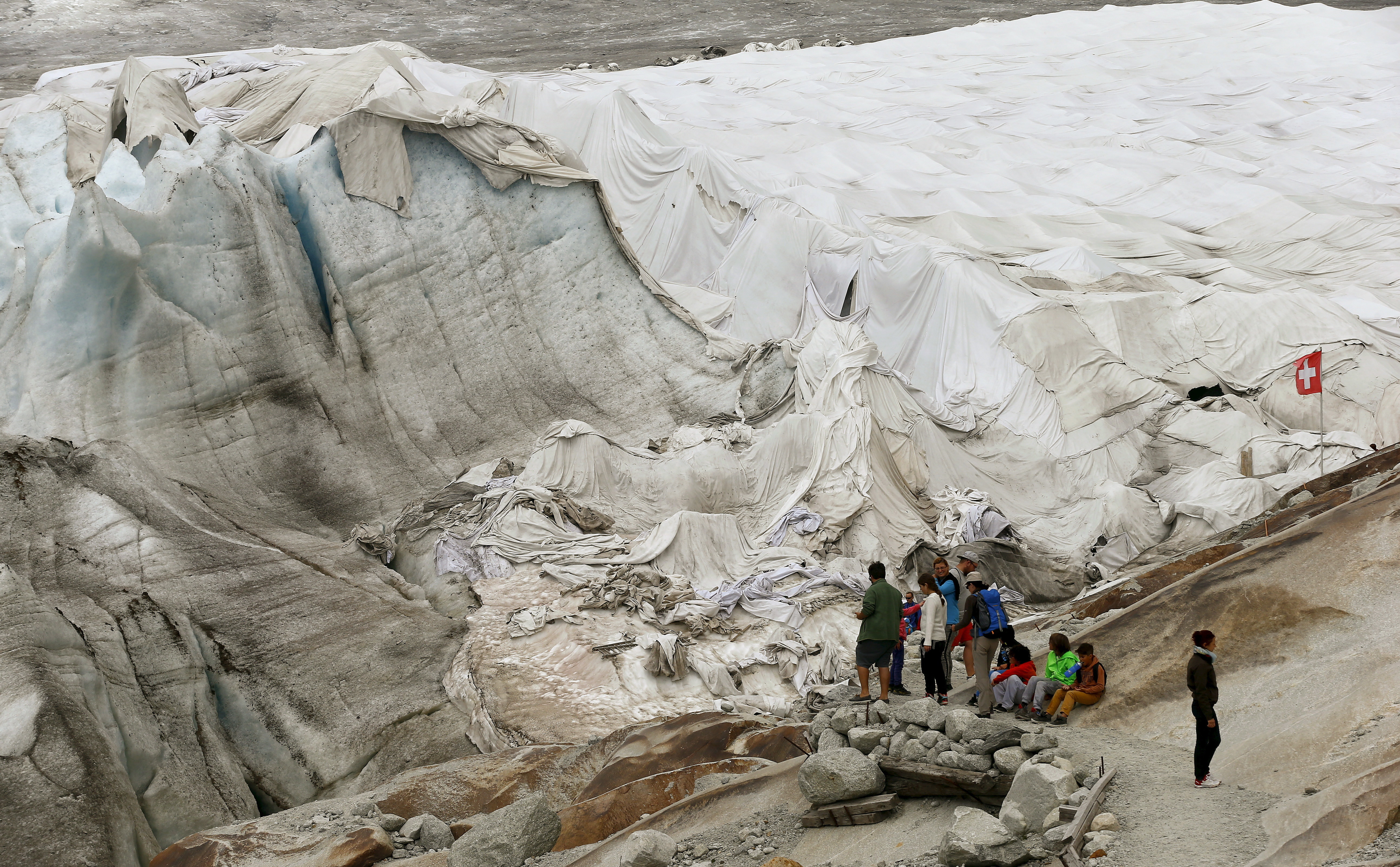 The Rhone Glacier is a popular tourist destination that has been shrinking rapidly over the last decade; of the roughly 1,148 feet (350 meters) in ice thickness lost since 1856, 131 ft has disappeared in the last 10 years alone, according to AFP. Thus the blankets.

Others have suggested even larger-scale interventions, like using wind-powered pumps to squirt sea water over Arctic sea ice in winter, prompting thicker (and, they hope, more stable) ice to form, Oceans Deeply reports. Scientists have also floated the idea of building artificial platform-like mounds underwater to prop up particularly vulnerable ice sheets from below.

NOT sure whether to put this down to nostalgia, tourism, hubristic madness or simply an act of climate derangement syndrome?

BUT, one thing is a given – this almost ‘artistic’ yearly ritual, in defiance of Mother Nature is, no doubt, brought on by fear and anxiety over the perceived ill effect that mankind’s excesses and emissions are having on glaciers and the climate.

IT’S a shame that the good residents of the Rhone Glacier weren’t around in 1857 to spare a few blankets for Washington’s most famous glacier, Nisqually, that retreated 3,200 feet and lost 200 feet of thickness between 1857 and 1918…

COINCIDENTALLY, the Swiss Rhone Glacier began its retreat in 1856, a year before Nisqually in Washington began its melt…

“The Rhone Glacier is a popular tourist destination that has been shrinking rapidly over the last decade; of the roughly 1,148 feet (350 meters) in ice thickness lost since 1856…”