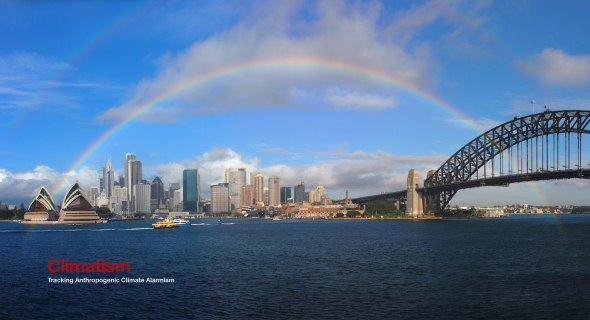 “CLIMATE alarmism is a gigantic fraud:
it only survives by suppressing dissent and by spending
tens of billions of dollars of public money
every year on pseudo-scientific propaganda.”
– Leo Goldstein

SEA-LEVEL RISE alarmism is just one in a long line of propaganda tools used by the Climate Crisis Industry to promote the narrative that human CO2 emissions are causing dangerous  climate change.

VERY little of the carefully orchestrated fear-mongering is based on observed reality and empirical evidence, rather, worst-case climate model scenarios pushed into the unaccountable future, designed to scare you and policy makers into (costly) “climate action now!”.

SEA level alarmism holds significant implications for the public who bear the burden of carbon-dioxide related taxes. Those living within coastal areas, constrained by further punitive imposts as insurance companies exploit the climate of fear for their own profit.

SEA levels vary by geographical region from positive to neutral to negative. Where positive sea-level ‘rise’ is concerned, the best science demonstrates that there is no immediate or long-term crisis in play. Importantly, no acceleration has been detected in the era of industrialisation.

VIV Forbes of the Carbon Sense Coalition is a member of the climate-realist think tank The Salt Bush Club  – a group of famed ex-industry leaders and climate science experts fighting back against dangerous and costly climate alarmism with fact-based reports filled with reason and common sense. Not hyper-climate alarmism and climate-model based theory that underpins mainstream media climate reporting.

FROM their About page:

“We have been listening to scare-mongers and panicky children for too long – it’s time to listen to sensible people and grown-ups.”
November 2018

The Saltbush Club is an unplanned venture. Tapping a deep vein of public concern about the Paris climate agreement, it just grew. In about a month, with zero corporate or government support, a few lone individuals have attracted an imposing line-up of sensible people who are well informed on all aspects of the climate debate, and on the growing energy, water and infrastructure problems facing Australia. Many are only prepared to publicise their concern since they have been freed from corporate, academic or government restraints. They are now expressing long-held but often-suppressed opinions.

A much larger group of “Silent Members” have indicated support, but do not want their names made public because they fear that exposure would harm their prospects for employment, promotion or business. They will help, but silently.

All Saltbush members are concerned that climate-alarm policies promoted by most politicians are not based on sound science, and are already causing great damage to Australian industry, jobs and consumers.

They understand that the war on hydro-carbon fuels and grazing animals in Australia is not based on sound science, but is part of a broad international agenda designed to strengthen UN agencies, centralise decision making and weaken property rights with international rules and taxes.

They aim to change the climate of public opinion, thus changing the political agenda.

There is no consensus – it is time for a debate.

On behalf of the founders:

About – The Saltbush Club

Dr G M Derrick reports the simple facts on the state of sea-level rise around Sydney Harbour over the past 132 years of records.

THE information is what we should be receiving from our politicians and media. Instead the information we receive about climate change and sea-levels is filled with exaggeration, alarmism, ‘homogenisation’, and plenty of politics in order to drive a political agenda of climate catastrophe in order to justify costly fixes, schemes, scams and taxes.

THE big losers – empirically-based science, the simple truth and the taxpayer who is forced to pay billions upon billions for fake fixes (windmills, solar panels and carbon taxes) to a fake scam.

Climate change and sea level rise over the past 20,000 years

WHAT is pertinent to the sea-level rise debate is whether SLR is accelerating due to human CO2 emissions.

“Sea level has been rising for the last ten thousand years, since the last Ice Age…the question is whether sea level rise is accelerating owing to human caused emissions.  It doesn’t look like there is any great acceleration, so far, of sea level rise associated with human warming.  These predictions of alarming sea level rise depend on massive melting of the big continental glaciers — Greenland and Antarctica.  The Antarctic ice sheet is actually growing.  Greenland shows large multi-decadal variability. ….  There is no evidence so far that humans are increasing sea level rise in any kind of a worrying way.” — Dr. Judith Curry, video interview published 9 August 2017

“Observed sea level rise over the last century has averaged about 8 inches, although local values may be substantially more or less based on local vertical land motion, land use, regional ocean circulations and tidal variations.“

Sea level rise acceleration (or not): Projections for the 21st century | Climate Etc.

ACCORDING to “the science” there has been no stat-sig or relevant acceleration of sea-level rise since industrialisation :

SOMETHING other than carbon dioxide caused seas to rise, at the current steady rate, around 1790 :

NO ‘acceleration’ in sea-level rise exists in any NOAA or PSMSL tidal gauge records :

ONE third of all human (CO2) influence has occurred over the past 20-30 years which has not caused acceleration of sea-levels, a jot :

THOUGH not as ‘scientific’, it is interesting to use the visual point of Fort Denison to note the high-tide line and the notable absence of SL rise since 1885 to present :

CLIMATE change hysteria and groupthink propaganda freely and uncritically spread by the compliant mainstream media has influenced local municipalities to wrongly and deceptively raise rates to cover “climate change” threats and damage as well insurance companies raising premiums. The result has been a devaluing of many coastal homes of up to 25% and the same increase in insurance premiums.

HERE’s an example of what the NSW Govt and Lake Macquarie Council are projecting for the 21st Century:

Quantifying Sea Level Fall | Watts Up With That?

THE very same modelled alarmism is evident in the ensemble of U.N. IPCC CMIP5 climate models that basically act as evidence that drives the entire $2,000,000,000,000 US per year (2 Trillion) Climate Crisis Industry and associated climate policy settings that are sending Australian and other Western nations’ electricity prices through the roof, forcing businesses to close and/or move offshore and causing rampant energy poverty, hurting our most vulnerable.

(With the closure of the 1,550 MW Hazlewood power plant in Victoria, since this chart was produced, Victoria’s power prices are now nearing SA’s) 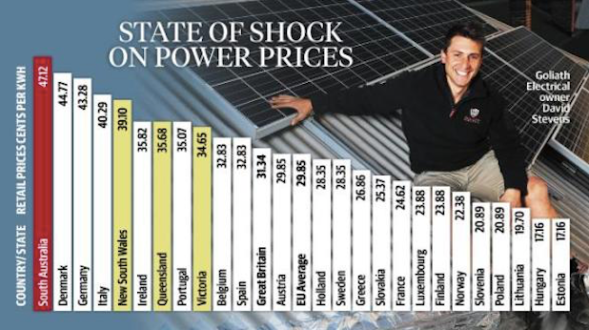 ENERGY poverty, rising insurance premiums, business closures, job losses and the highest electricity prices in the world is the grim reality of what life looks like under the totalitarian rule of the feel-good ‘Greens’. The zero-emissions zealots who want to force us backwards down the energy ladder to the days of human, animal and solar power.

JUST as socialist central planning failed miserably before it was replaced by free market economies, green central planning will have to be discarded before Australia and other Western nations, crippled by pseudoscientific climatology and the mad rush into costly and intermittent ‘green’ energy, will see a return to energy security, competitive pricing, business prosperity, job opportunities and a ‘liveable’ existence for our most vulnerable.