‘UNPRECEDENTED’ EXTREMES : Heat Waves And Summer Snow Down Under

Heat Wave And Snow
HOBART. Saturday. — A fall of snow on Mt. Wellington closed a week of weather conditions in Hobart unprecedented in the memory of those who can go back 40 years.
Early in the week the weather was hot and sultry, and the humidity was us unusual for Hobart as it was uncomfortable.
On Thursday the humidity was more than 10 per cent, in excess of the average for this time of the year.
Rain storms threatened on Friday morning, and between 3 p.m. and 9 a.m. today, 218 points of rain was registered and another 11 points by 3 p.m.
Snow began to fall on the mountain last night, and continued during the early hours this morning. There was a white mantle about 2 inches thick on the mountain to-day.
The minimum temperature was 34 degrees F [1.1°C]
Visitors have found the conditions most trying.

THIS report was from Monday the 7th of February, 1930 during summer in Australia. 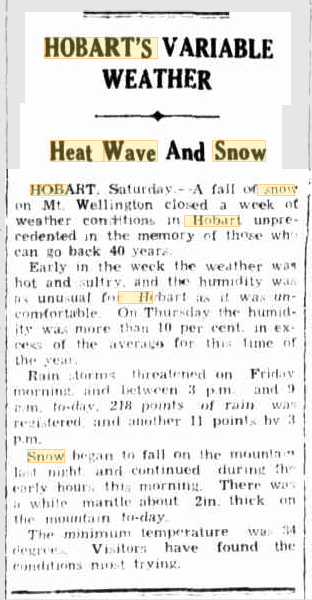 “VARIABLE WEATHER” aka “Extreme Weather” (in today’s language!) is not ‘unprecedented’ for Australia. Even with  CO₂ levels at 400 PPM : 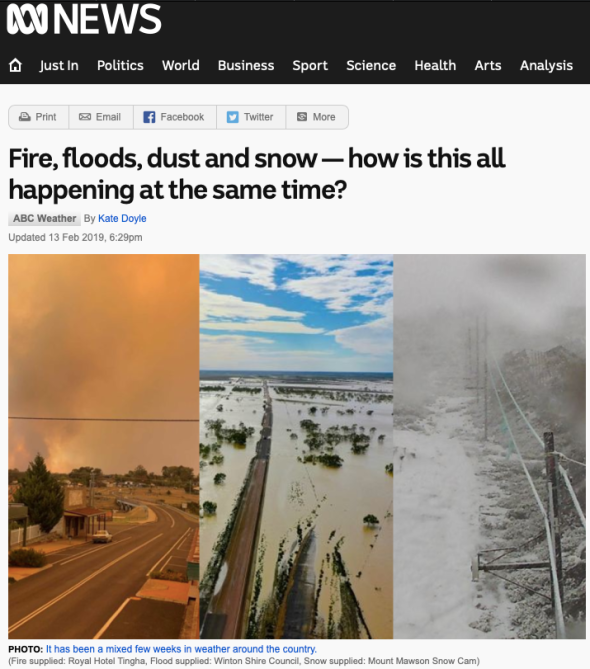 Fire, floods, dust and snow — how is this all happening at the same time? – ABC News

“From record-heat to snow in Tasmania”.

From record-heat to snow in Tasmania

Snow is falling in Tasmania today, just four days after the state experienced it hottest March weather on record.

Autumn is a time of contrasting weather in southern Australia, as hot air lingering over the mainland after summer clashes with cold air surging out of the Southern Ocean.

Weather News – From record-heat to snow in Tasmania

SEE also : Snow and hail possible around Hobart, days after sweltering top of 39.1C | The Mercury