Media personality Milo Yiannopolous took a question from an audience member during a visit to the University of New Mexico that took place late January of this year. This is the same event when some Muslim women in the audience yelled at Milo and then left the room when he made remarks about Islam.

In this sequence, Milo gives his views on climate change while sharing his experience working at a non-profit GMO involved in climate change research. He ties it all in to the overall issue raised by the audience member.

THE SILENT MAJORITY have spoken. They have rejected the failed policies of liberal socialism foisted upon them by an out of touch political class and ruling elite.

It is a modern day political miracle. Trump has defied all odds, beating off a viciously bias, partisan and colluding mainstream media and even many from his own party establishment.

Peta Credlin read the tea leaves early, expressing what lies within the people’s hearts and minds:

When people say to me “there’s no way Trump can happen here”, I tell them they need to go for a drive outside their leafy suburb, find a pub, sit down in the front bar and just listen.

DONALD Trump’s win is the biggest “f— you” to all his enemies — the media, the politicians and Wall Street.

The whole world now — and our own political class — has been given a shock and a warning.

Stop bullying and patronising the silent majority or they will rise in terrible revolt.The British vote to leave Europe showed the public would no longer be chained. Trump’s victory confirms it.

Even I could not see Trump winning. I could not believe so many voters were so cowed by the violence and the abuse of the Left that the polls, misled by their silence, had Hillary Clinton winning by an average of 46.8 per cent to Trump’s 43.6.

But in the ballot box those voters cut loose and chose as their next president a man with zero political experience and vilified in the media as a sexist, racist, neo-Nazi hothead likely to drop the nuclear bomb.

Maybe he is some of that, but how much did voters loathe the Washington crowd that they’d still rather have Trump, who on the day before the election led crowds in another chant of “Drain the swamp”?

There will be many sanctimonious commentators who will howl that this proves every second American is a cretin.

Clinton herself in a disastrous moment fell for this self-congratulatory fantasy, indulging in exactly the kind of abuse that makes the Left so contemptible to so many voters now, in the US and here.

If you’re struggling with Trump’s win – the why’s and how’s, watch the magnificent “Milo” in this blistering BBC interview, to understand why the people of America have rejected the ruling class and the political elite in favour of a man who is actually listening to them… 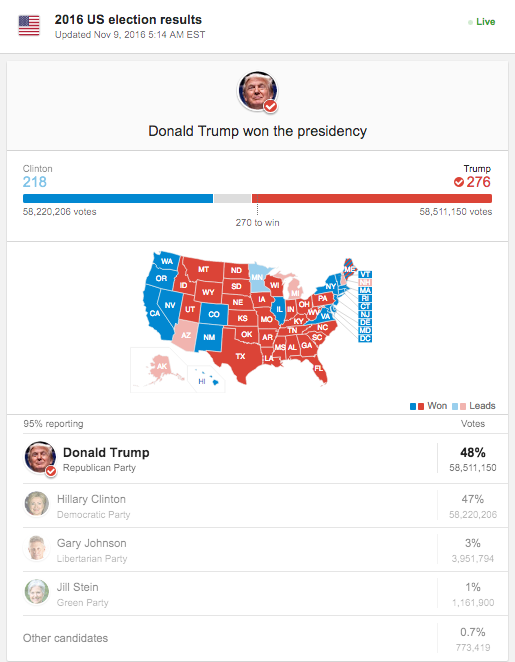 Came across this gem of an interview between the BBC and Breitbart’s Milo Yiannopoulos, from a Rita Panahi tweet:

It is quite possibly the best ten-minute explanation of the politically correct and culturally twisted world we live in today.

A powerful condemnation of the desperate leftist collective marxist drone psyche (Live Leak) and a brutal exposure of the out-of-touch-with-reality BBC, ergo the rest of the majority Leftist mainstream media.

This stuff is exactly what our kids should be taught in school, especially coming from a ‘Gay’ man in the (Leftist-designed) politically correct, identity-driven times we inhabit.