CHILDREN Of The Ignorant : New Zealand Schools To Terrify Children About The ‘Climate Crisis’

CHILDREN Of The Ignorant – CLIMATISM

“Give me four years to teach the children
and the seed I have sown will never be uprooted.”
– Vladimir Lenin

“He alone, who owns the youth, gains the future.”
– Adolf Hitler

“Our global future depends on the willingness of every nation
to invest in its people, especially women and children.”
– Hillary Clinton

‘EDUCATION’ continues its slide into indoctrination and brainwashing. The Cultural Marxist’s “long march through the institutions” is now substantially complete.

IF wagging school on ‘Fridays’ was not damaging enough to young and impressionable minds, changes to New Zealand’s curriculum aim to  brainwash children how to “plan their own activism” with an aim to put “the country at the forefront of climate crisis education worldwide.” !

AREN’T children frightened enough with current ClimateChange™️ hysteria and the prospect of the planet dying in under twelve years? No doubt PM Jacinda Ardern has planned for extra psychologists to deal with the likely mass-outbreak of PTSD.

GRAB your “feelings thermometer”, this is Communism in full swing …

Every school in New Zealand will this year have access to materials about the climate crisis written by the country’s leading science agencies – including tools for students to plan their own activism, and to process their feelings of “eco-anxiety” over global heating.  […]

Young people feel betrayed and abandoned by older generations over their lack of action on the climate issue, and worry about it has increasingly sparked anxiety and depression, a group of British psychologists warned in September. […]

Materials created for teachers that were provided to the Guardian suggest students keep a “feelings thermometer” to track their emotions, learn how to change defeatist self-talk, and consider how their feelings could generate action and response.

NOT to be outdone by their ANZAC neighbours, Australia’s NSW Teacher’s Federation encouraging teachers to support students, wagging school to protest climate, by wearing Green to school!

Let students know they have your support by wearing green in your workplace for a day in the two weeks prior to September 20, then pledge your support by posting a photo on social media and emailing to pics@nswtf.org.au. 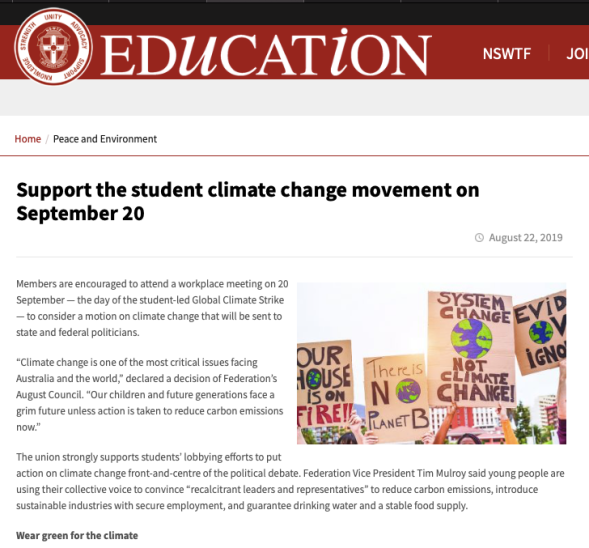 THE cancer is not quarantined to the Southern Hemisphere …

“They basically claim that climate change hysteria should be part of our culture and it requires a social revolution. Apparently English classes are the proper place to train social revolutionaries.”

BARBARA McKenzie from NZ sent in this via twitter :

Why are kids getting worse at maths? | RNZ News

UPDATE – ‘Scientists have compared the tactics and hysteria to those used by cults and dictators.’

THIS time, out of Canada…

OUR children are living longer and safer lives than at anytime in human history. They have also never lived in more climate-safe times. To use them as human shields in order to drive a political agenda is unconscionable.

CHILDREN should be taught ‘how’ to think, not ‘what’ to think. Particularly as the quality of Australia’s education system (and New Zealand’s) has fallen behind that of Kazakhstan in Mathematics and Science in recent years.

STUDENTS ought to be filled with enthusiasm and hope, not manufactured mainstream media propagandised hysteria, climate doom and gloom.

THEY should also know what they are being sold. Intermittent ‘energy’ sources that are causing far more problems for the environment, economies and the poor, right now, than any 1-2 degree (fabricated) warming could ever do by 2100…

ENERGY poverty, rising insurance premiums, business closures, job losses and the highest electricity prices in the world is the grim reality of what life looks like under the totalitarian rule of the feel-good ‘Greens’. The zero-emissions zealots who want to force us backwards down the energy ladder to the days of human, animal and solar power.

BRUTAL and comprehensive rebuttal by Paul Homewood to the latest climate agitprop out of the taxpayer funded BBC, released in time to further pollute the minds of their readers as they focus on the UN COP24 climate junket in Katowice, Poland.

The BBC have now stopped even trying to camouflage their bias on climate change, with this latest piece of propaganda:

Representatives from nearly 200 countries are gathering in Poland for talks on climate change – aimed at breathing new life into the Paris Agreement.

The UN has warned the 2015 Paris accord’s goal of limiting global warming to “well below 2C above pre-industrial levels” is in danger because major economies, including the US and the EU, are falling short of their pledges.

So how warm has the world got and what can we do about it?

The world is now…