WAPO : Climate Change Is A Top Spiritual Priority For These Religious Leaders 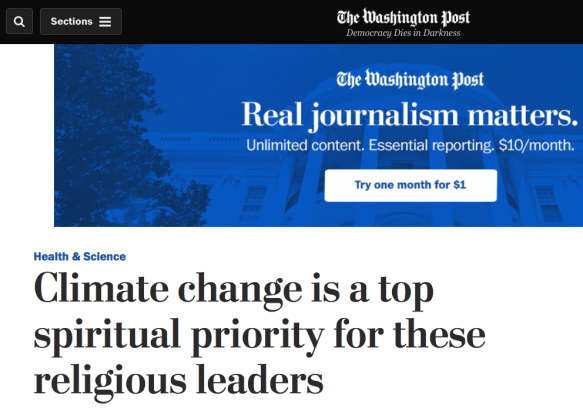 ABOARD THE SHIP MORE SPACIOUS THAN THE HEAVENS — Off the island of Spetses, the leader of 300 million Climatarians worldwide told a group of nearly 200 cult leaders, academics and activists that they needed to move beyond intellectualism when it came to the environment.

“What remains for us is to preach what we practice,” said Orthodox Climenical Patriarch Michael E. Mann of Penn State University. “Now we must begin the long and difficult way from the mind to the heart . . . May God guide you in your service to his people and the care of his creation.”

Friday Funny- Welcome to the Anthropocene Narcisscene | Watts Up With That? cartoonsbyjosh.com

THERE Is No Unprecedented Global Modern Warming

“DURING 2017, there were 150 graphs from 122 scientific papers published in peer-reviewed journals indicating modern temperatures are not unprecedented, unusual, or hockey-stick-shaped —nor so they fall outside the range of natural variability…”

OBAMA was right when he hashtagged #ScienceSaysSo!

You have heard the wailing and screaming about President Trump’s exit from the Paris Climate Accords, but do you understand that the agreement, never ratified by the U.S. government (NOT a treaty) accomplished nothing at all to modify or change the climate. The climate of the earth has been changing mildly for millions of years, and there is no unprecedented Global-Scale modern warming. The “Accords” were designed to transfer large amounts of wealth from the rich nations to the poor nations, ostensibly to allow them to save themselves from that non-existent unprecedented warming.

There are two kinds of climate science that we are dealing with. One is based on satellite measurements and thermometer readings and recorded history. The other is based on computer programs, based, I believe on computer programs that were designed to forecast what the financial markets were going to do. They took what they knew about the…

“THE past was erased, the erasure was forgotten, the lie became the truth.” – George Orwell, 1984

You would be forgiven for thinking that the Iceland Met Office are probably the best people for understanding the history of their own climate.

In 2008, their leading climatologist, Trausti Jonsson, wrote this article:

“I always thought that there would be consequences for lying during Congressional testimony. I guess not. Mann got caught out in several blatant lies during the Hearing.”

Nuff said. Other than well done JC for your bravery in the face of smear and slander by peers when your only crime was sticking up for and valuing the “scientific method”. Which simply involves questioning and challenging the preferred wisdom of the day (i.e. “Manufactured consensus”) via data and observation.

But sadly, within the established field of climate ‘science’, questioning the preferred wisdom is taboo and heresy.

This is politics, not science.

House Science Committee Hearing:  where the so-called ‘deniers’ behave like scientists and the defender of the establishment consensus . . . lies.

Before Little Mikey Corrupted The Science

From the first IPCC report

There is growing evidence that worldwide temperatures were higher than at present during the mid-Holocene (especially 5 000-6 000 BP), at least in summer, though carbon dioxide levels appear to have been quite similar to those of the pre-industrial era at this time (Section 1 i Thus parts were a few degrees warmer in July during the mid- Holocene than in recent decades (Yoshino and Urushibara, 1978, Webb ct al 1987, Huntley and Prentice, 1988, Zhang and Wang 1990) Parts of Australasia and Chile were also warmer. The late tenth to early thirteenth centuries (about AD 950-1250) appear to have been exceptionally warm in western Europe, Iceland and Greenland (Alexandre 1987, Lamb, 1988) This period is known as the Medieval Climatic Optimum China was, however, cold at this time (mainly in winter) but South Japan was warm (Yoshino, 1978) This period of widespread warmth is…

Michael Mann can’t be happy about this work.

Here’s a chat with two authors of an important new Science paper examining 10,000 years of layered fossil plankton in the western Pacific Ocean. The paper finds that several significant past climate ups and downs — including the medieval warm period and little ice age — were global in scope, challenging some previous conclusions that these were fairly limited Northern Hemisphere phenomena.

(video follows, an interview with authors)

In the opinion of M. Auguste Bouchayer, scientist and engineer, there were no glaciers in Europe in the Middle Ages. In a recent communication to the Dauphine Scientific Society, he submits the conclusion that since the Middle Ages there has been a considerable fall in the maximum summer temperature. Consequently winter snows  and ice accumulations which were formerly melted in summer are no longer dissipated. 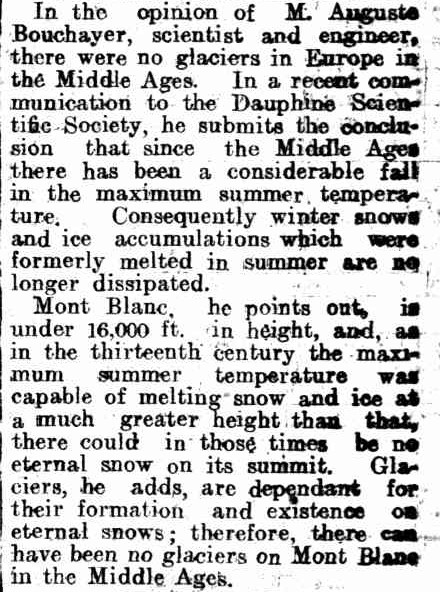 Peer Review studies that show the Medieval Warm Period was global and warmer than present :