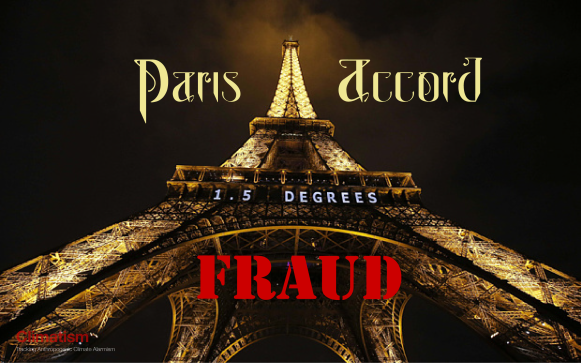 MUST READ information on the Paris Accord Fraud via Viv Forbes’  The Carbon Sense Coalition :

INTRO – Why Should Australia Pull Out Of The Paris Accord?

Tony Abbott is right – Australia should quit the Paris Climate Treaty.China, India, Russia, Brazil, South Africa and Indonesia will ignore Paris. USA has already quit and Japan even withdrew from the Kyoto Treaty. Germany will fail to meet its obligations and Poland will not try very hard. France relies heavily on nuclear power and naturally supports imposing Paris handicaps on competitors.

And most of the rest of the world are just hanging in there hoping for a flood of cash from the climate compensation fund or from selling phony carbon credits.

Australia has huge coal, gas, oil and uranium resources. To export these, while we hobble our industries with windmill power, is insane.

The Paris Accord is based on fraud. Carbon Dioxide or CO2 is essential for all life on earth. Without it we are all extinct.

There is nothing unusual happing with the globe’s temperatures. No unusual warming.

Our interglacial warm period peaked 8,000 years ago and we are cooling. We’ve come to the end of this interglacial and are about to enter the next ice age. Humans can do nothing to stop that.

The globe has no temperature control knob, it is impossible for humans to control the globe’s temperature.

CO2 does not produce warming. There’s not enough of it to do anything.

It is warming that produces CO2. It is impossible for the cause to be the effect.

CO2 has lagged temperature by 1,000 years for the past 1 mil years and it has never stopped the earth from entering an ice age, even when it was 4,000 ppm.

CO2 is the gas of life. We need more not less of it and we should be regulating for more not less emissions. It is needed to grow our food crops.

Paris is based on IPCC reports. The IPCC rely on their GCM models. None of the models rely on past climate history but rather a mathematical theory based on refuted, negated, fake and fraudulent science. They all incorporate:

Then back all this up by fraudulently altering the data to support the failed models that can’t even predict the last 30 years of hindsight. END_OF_DOCUMENT_TOKEN_TO_BE_REPLACED

BEFORE NASA climate was captured by radical environmentalists (Hansen/Schmidt et al) and sold their soul to the widely debunked “97% of scientists believe that CO2 is the climate control knob” groupthink virus, they knew perfectly well that the sun controlled Earth’s climate.

AND, before the new-NASA-activists rewrote climate ‘science’, the National Aeronautics Space Agency boldly (and correctly) noted that “Other important forcings of Earth’s climate system” such as “clouds, airborne particulate matter, and surface brightness [have] the capacity to exceed the warming influence of greenhouse gases and cause our world to cool.”

FROM the above NASA article that disappeared around 2010 :

WHAT ARE THE PRIMARY FORCINGS OF THE EARTH SYSTEM?

The Sun is the primary forcing of Earth’s climate system. Sunlight warms our world. Sunlight drives atmospheric and oceanic circulation patterns. Sunlight powers the process of photosynthesis that plants need to grow. Sunlight causes convection which carries warmth and water vapor up into the sky where clouds form and bring rain. In short, the Sun drives almost every aspect of our world’s climate system and makes possible life as we know it.

Earth’s orbit around and orientation toward the Sun change over spans of many thousands of years. In turn, these changing “orbital mechanics” force climate to change because they change where and how much sunlight reaches Earth. Thus, changing Earth’s exposure to sunlight forces climate to change. According to scientists’ models of Earth’s orbit and orientation toward the Sun indicate that our world should be just beginning to enter a new period of cooling — perhaps the next ice age.

However, a new force for change has arisen: humans. After the industrial revolution, humans introduced increasing amounts of greenhouse gases into the atmosphere, and changed the surface of the landscape to an extent great enough to influence climate on local and global scales. By driving up carbon dioxide levels in the atmosphere (by about 30 percent), humans have increased its capacity to trap warmth near the surface.

Other important forcings of Earth’s climate system include such “variables” as clouds, airborne particulate matter, and surface brightness. Each of these varying features of Earth’s environment has the capacity to exceed the warming influence of greenhouse gases and cause our world to cool. For example, increased cloudiness would give more shade to the surface while reflecting more sunlight back to space. Increased airborne particles (or “aerosols”) would scatter and reflect more sunlight back to space, thereby cooling the surface. Major volcanic eruptions (such as that of Mt. Pinatubo in 1992) can inject so much aerosol into the atmosphere that, as it spreads around the globe, it reduces sunlight and cause Earth to cool. Likewise, increasing the surface area of highly reflective surface types, such as ice sheets, reflects greater amounts of sunlight back to space and causes Earth to cool.

Scientists are using NASA satellites to monitor all of the aforementioned forcings of Earth’s climate system to better understand how they are changing over time, and how any changes in them affect climate.

Warren Buffett is at least brutally honest as to why climate change alarmism means big business for his re-insurance business (from a 2014 interview):

Interviewer: How has the latest rise of extreme weather events changed the calculus on Ajit Jain in reinsurance?

Warren Buffett: “The public has the impression, because there has been so much talk about climate, that the events of the last ten years have been unusual. …They haven’t. We’ve been remarkably free of hurricanes in the last five years. If you’ve been writing hurricane insurance it’s been all profit.”

Warren Buffett: “I love apocalyptic predictions, because … they probably do affect rates…”

The Economist has been running this video on Twitter, with the usual fraudulent claims.

They forget to mention that Texas has had even more intensive storms in the past, notably 1978 and 1979, and that Bangladesh regularly floods.

But the headline claim is based on this graph:

The first thing to highlight about this, which should really give the whole away as an giant fraud, is that there were apparently virtually no extreme weather events in the early 20thC. Nobody with half a brain could seriously believe this, but apparently Economist readers do.

There appears to be no provenance given for this graph, which in itself is utterly damning for a supposedly serious journal. But it seems to be based on a similarly fraudulent claim from the insurance company, Munich Re, which was doing the rounds a…