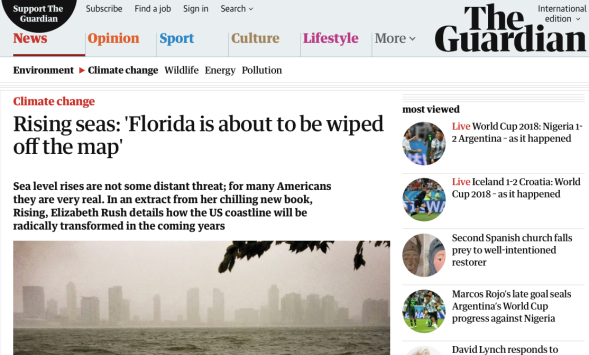 Rising seas: ‘Florida is about to be wiped off the map’ | Environment | The Guardian

LIKE Groundhog Day, The Guardian has published another emotion-filled, sea-level rise propaganda piece confirming how bad we are burning fossil fuels, causing Mother Nature to likely punish us with floods.

“Only 7% of the heat being trapped by greenhouse gases is stored in the atmosphere,” Hal begins. “Do you know where the other 93% lives?”

A teenager, wrists lined in aquamarine beaded bracelets, rubs sleep from her eyes. Returns her head to its resting position in her palm. The man seated behind me roots around in his briefcase for a breakfast bar. No one raises a hand.

“In the ocean,” Hal continues. “That heat is expanding the ocean, which is contributing to sea level rise, and it is also, more importantly, creating the setting for something we really don’t want to have happen: rapid melt of ice.”

Over the past 200 years seas have been rising at a relatively steady rate.

According to NOAA the current rate of global sea-level rise is 2.8 ± 0.4 mm/year: 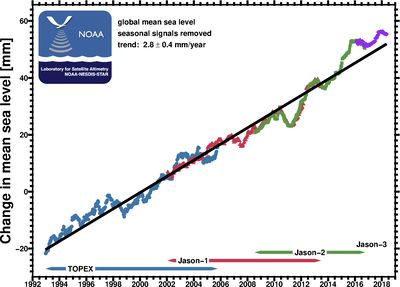 Climate change and sea level rise over the past 20,000 years… 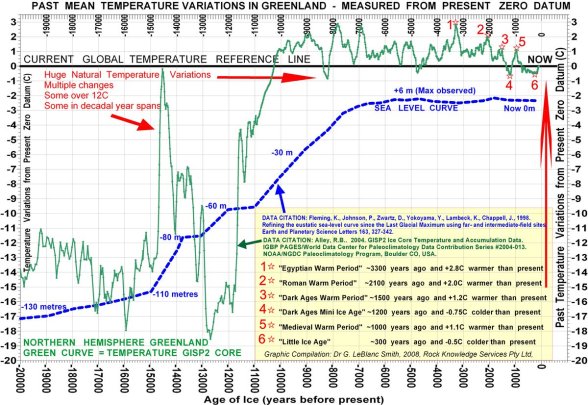 Climate change and sea level rise over the past 20,000 years 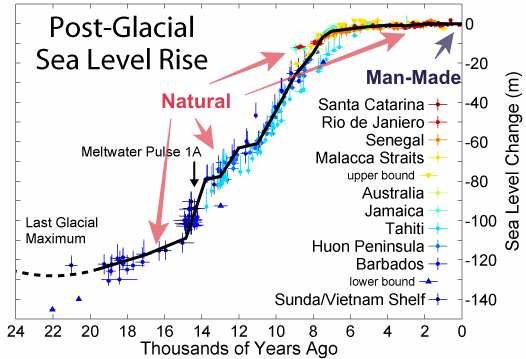 SEAS have not stopped rising since the end of the last great Ice Age ~20,000 years ago. However, what is pertinent to the sea-level rise debate is whether SLR is accelerating due to human CO2 emissions. END_OF_DOCUMENT_TOKEN_TO_BE_REPLACED

THE one which featured a hurricane as the selling point.

Thoughts and prayers to all in Irma’s path and to those still recovering from Harvey.

While this won’t be of much comfort for those that are squarely in it’s path right now, it is a small bit of good news. Dr. Philip Klotzbach has compiled rankings of both hurricane Irma and Harvey when they made landfall. Compared to the 1935 Labor Day storm, Irma is a distant 7th, tied with the 1928 Lake Okeechobee storm. 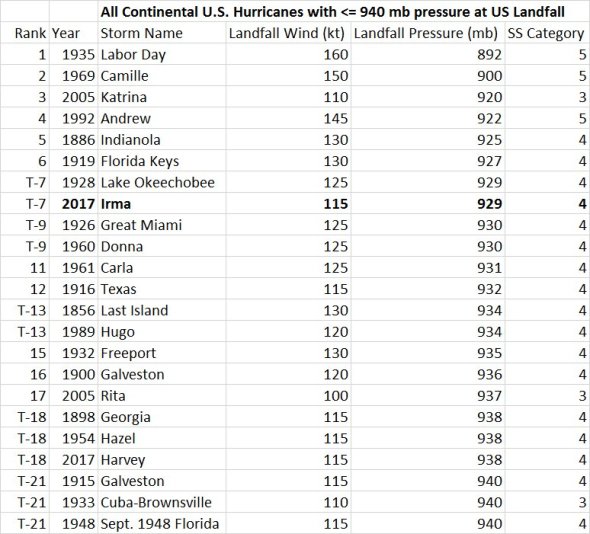 With Irma ranked 7th, and Harvey ranked 18th, it’s going to be tough for climate alarmists to try connecting these two storms to being driven by CO2/global warming. But they’ll do it anyway.

Maho Beach is a beach on the Dutch side of the Caribbean island of Saint Martin, in the territory of Sint Maarten. It is famous for the Princess Juliana International Airport adjacent to the beach.

The Maho Beach Cam recorded these two horrendous clips before it was destroyed by “The Beast” Irma, packing wind speeds of 185 MPH (297 KMH)…

Models have revealed Hurricane Irma is the “strongest Atlantic hurricane ever” as it has already hit much of the Caribbean, with St Kitts and Antigua next.

The National Hurricane Center said Irma was maintaining its Category 5 strength with sustained winds near 185 MPH.

Hurricane warnings remain in place across the Caribbean and many people in the immediate path of Irma have been left without power.

Hurricane Irma’s strength has triggered seismometers, which are designed to measure earthquakes as the Category 5 storm creates life-threatening storm surges along its path.

Officials in Florida have begun ordering evacuations after US forecast models predicted southern tip of Florida being caught up in Irma’s path.

The NOAA’s National Hurricane Center, based in Miami, has told Americans in hurricane-prone areas to brace themselves for Hurricane Irma to reach land.

The latest update from the NHC said: “The chance of direct impacts from Irma later this week and this weekend is increasing in the Florida Keys and portions of the Florida Peninsula.

“However, it is too soon to specify the timing and magnitude of the impacts. Elsewhere, it is too early to determine what direct impacts Irma might have on the continental United States.”

This was taken earlier today by the new GOES-16 weather satellite, which has been producing some fantastic hi-res imagery of Hurricane Irma, This video, from NASA’s Short-term Prediction Research and Transition Center (SPoRT) in Huntsville, AL, tops anything I’ve ever seen.

Here is the same sequence, zoomed out a bit further:

“And we can see that Irma is not in the same league as the others.”

MORE sane and measured ‘scientific’ analysis from Paul Homewood. Refreshing, amongst the diatribe of alarmist speculation and theorising from the usual climate ambulance chasing suspects…

Is Irma The Most Powerful Atlantic Storm?

Is Irma The Most Powerful Atlantic Storm? | Climatism

From reliable news sources, up to 95% of Barbuda was flattened by Irma…

Bermuda and Barbados, sure. But Barbuda? You may never have heard of it.

We’d forgive you for having little knowledge of this Caribbean island, which, sadly, seems to have made its first appearance in global consciousness as the victim of Hurricane Irma.

“Barbuda now is literally rubble,” said prime minister Gaston Browne. “It is heart-wrenching, absolutely devastating.” He said some 95 per cent of the island’s buildings had been damaged.

Richard Branson’s son has posted to say that people staying on Necker Island are safe, but the buildings on the island have been destroyed.

There's nothing better than being a socialist who hates democracy while playing on your private island with a naked girl on your back. pic.twitter.com/jGR6ORLXqz

TWO’S A PARTY, THREE’S A CROWD!

It is not often that you get to see two Atlantic and one Gulf of Mexico hurricanes all at once on a single satellite image, but we live in “interesting times” and the remarkable imagery from the new GOES-16 spacecraft continues to impress the world.

Here, I’ve taken several snips and made a hi-res composite image to show a half-disk view of the Western Hemisphere as seen by visible light by GOES-16. Dr. Roy Spencer commented on Facebook today that

“[the] current view from space is beautiful….”.

On that I agree, it’s also Nature’s deadliness on display. Like the famous “blue marble” image from 1968, this image too is a bit humbling, and a reminder that no matter how much we want to believe we can control weather/climate through our actions and lifestyle, Nature, when it so chooses, can squish us like a bug.

Beauty and the Beasts – Hurricanes #Katia #Irma and #Jose in one spectacular image | Watts Up With That?

Anguilla copping a pounding from Irma. This is what a CAT 5 eyewall looks and feels like… 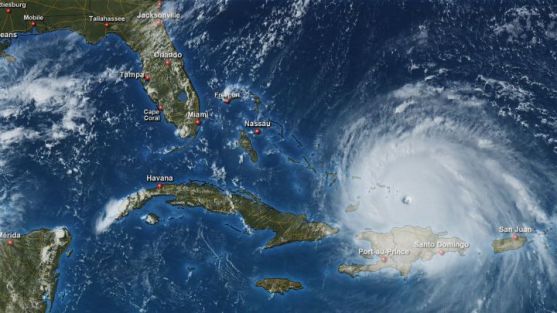 From the National Hurricane Center at 11PM EDT tonight:

Florida is 500 miles long and 160 miles wide at its most distant points.

That includes the Keys and the panhandle. Using Google Earth, I measured the length of the Florida peninsula (minus the Keys) and came up with ~391 miles. 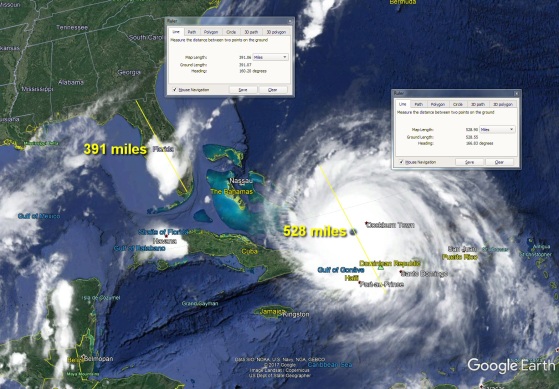 Measuring the size of Irma, based on the densest cloud bands, it shows ~528 miles in diameter from outer dense cloud bands through the eye. I also did a measurement across the panhandle from Tampa to Cape Canaveral and came up with ~139 miles. 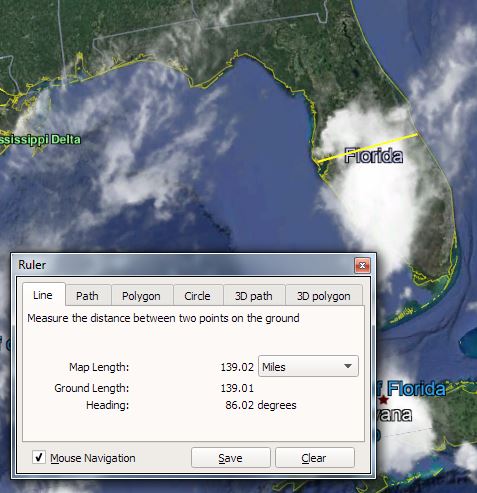 Irma is certainly bigger than hurricane Andrew, seen here in 1992: 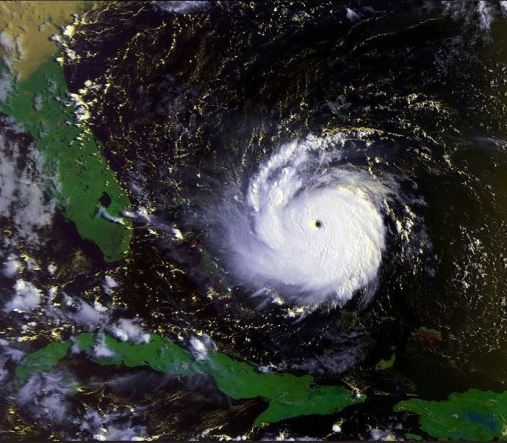 “Miami Beach is at such grave risk of sea water flooding today that it should preemptively be declared a disaster zone – not because of global-warming-driven sea level rise but due to a seeming total lack of sensible civil engineering standards and sensible building codes.” 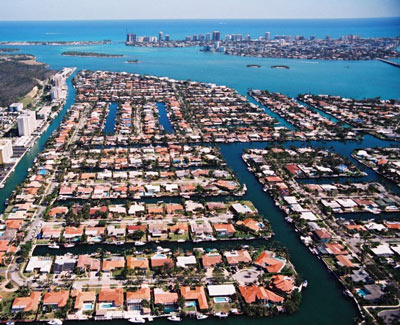 Miami Beach has a vice – a bad one – a dangerous one.

Miami’s vice is water, as in waterfront.  Everybody seems to want a house on the waterfront, a house on a canal, with a boat tied to the dock.

So what’s not to like about that?  After all, my wife and I live on our boat.

The New York Times (and the LA Times) has been running story after story about Miami flooding, Miami King Tides, Miami sea level rise threating billions of dollars of infrastructure.

Flooding of Coast, Caused by Global Warming, Has Already Begun

These news pieces offer images such as: 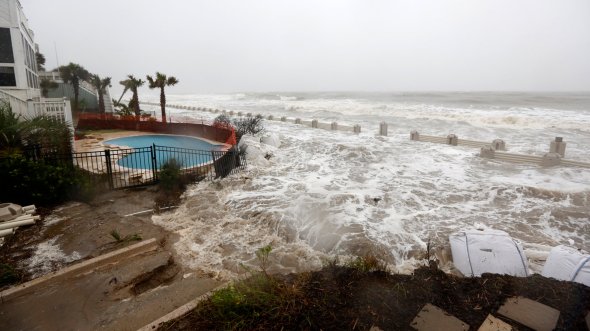 The L. A. Times published an article claiming that “Trump’s climate science denial clashes with the reality of rising seas in Florida” 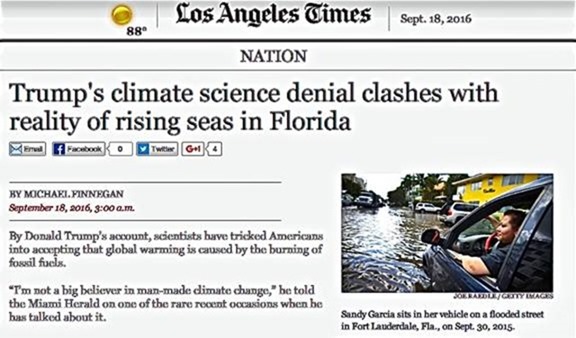 The article fails to address easily available and comprehensive NOAA tide gauge data updated through the year 2015 (http://tidesandcurrents.noaa.gov/sltrends/sltrends_us.htm) showing that the Florida coastline is experiencing no acceleration in coastal sea level rise and that the rate of coastal sea level rise there remains constant and consistent over more than 100 years of long term period tide gauge data measurements. 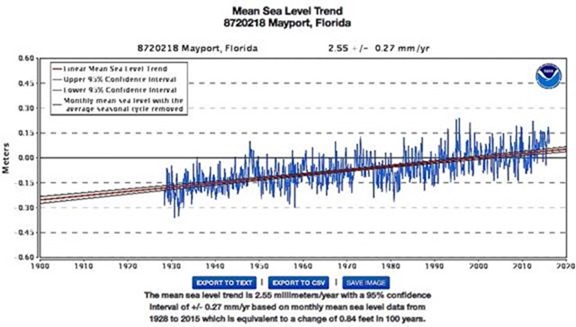 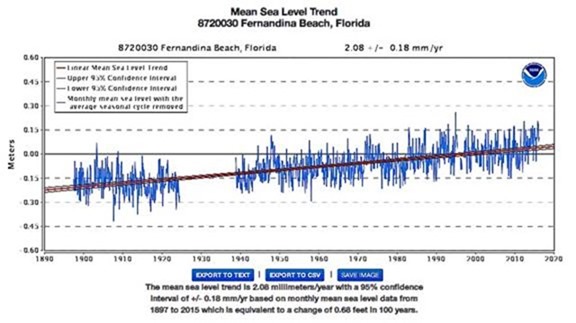 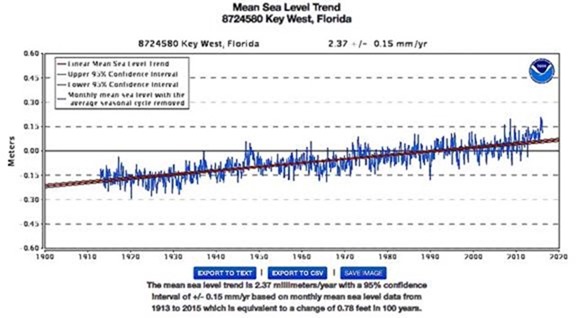 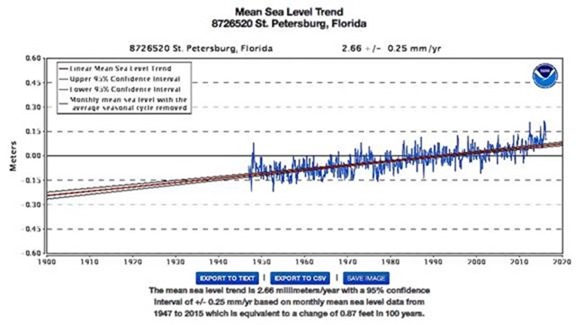 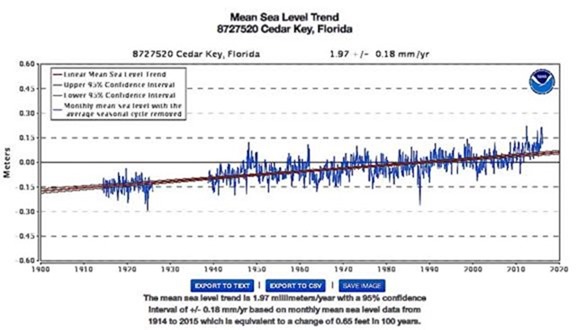 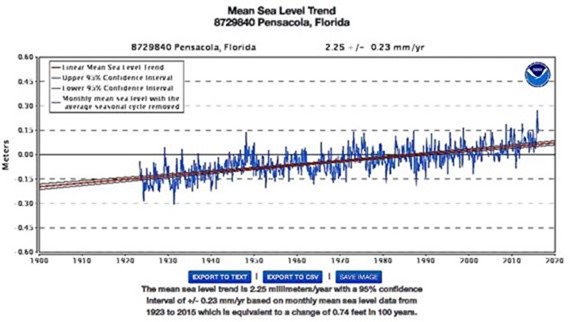