NOTE TO POLICY MAKERS : 41 Reasons Why Wind ‘Power’ Can Not Replace Fossil Fuels 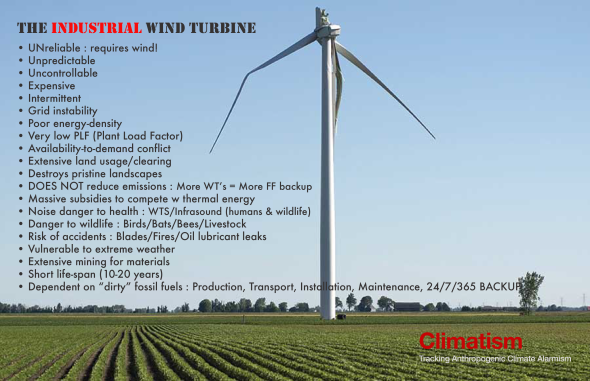 INDUSTRIAL Wind Turbines Are Neither “Clean, Green or Renewable” | CLIMATISM

“We get a tax credit if we build a lot of wind farms. That’s the only reason to build them. They don’t make sense without the tax credit.” – Warren Buffett

“Suggesting that renewables will let us phase rapidly off fossil fuels in the United States, China, India, or the world as a whole is almost the equivalent of believing in the Easter Bunny and Tooth Fairy.” – James Hansen (The Godfather of global warming alarmism and former NASA climate chief)

WESTERN climate-theory-obsessed politicians continue their ruinous and costly obsession with wind and solar ‘energy’. ‘UNreliables‘ that repeatedly fail the environment, communities and economies wherever installed.

ENERGY poverty, blackouts, skyrocketing power bills, grid instability and the destruction of pristine landscapes, (flora and fauna) among the many deleterious effects of low energy-density, weather and fossil-fuel dependent windmills and solar panels.

ALICE Friedemann of ‘Energy Skeptic‘ meticulously lays out 41 reasons that expose the colossal flaws of the mad rush into wind ‘power’ as a genuine replacement for fossil fuels and/or nuclear power. Economy and job-destroying, anti-energy policy initiatives undertaken by all-too-many in our current ruling class that defy all logic, reason and common sense based on easily verifiable data and on-the-ground evidence.

41 Reasons why wind power can not replace fossil fuels

Posted on December 14, 2018 by energyskeptic

Source: Leonard, T. 2012. Broken down and rusting, is this the future of Britain’s ‘wind rush’? | Daily Mail

Preface. Electricity simply doesn’t substitute for all the uses of fossil fuels, so windmills will never be able to reproduce themselves from the energy they generate — they are simply not sustainable.  Consider the life cycle of a wind turbine – giant diesel powered mining trucks and machines dig deep into the earth for iron ore, fossil-fueled ships take the ore to a facility that will crush it and permeate it with toxic chemicals to extract the metal from the ore, the metal will be taken in a diesel truck or locomotive to a smelter which runs exclusively on fossil fuels 24 x 7 x 365 for up to 22 years (any stoppage causes the lining to shatter so intermittent electricity won’t do). There are over 8,000 parts to a wind turbine which are delivered over global supply chains via petroleum-fueled ships, rail, air, and trucks to the assembly factory. Finally diesel cement trucks arrive at the wind turbine site to pour many tons of concrete and other diesel trucks carry segments of the wind turbine to the site and workers who drove gas or diesel vehicles to the site assemble it.

Here are the topics covered below in this long post:

41 Reasons why wind power can not replace fossil fuels | Peak Energy & Resources, Climate Change, and the Preservation of Knowledge

CLICK here for detailed expansion of each of the 41 points…