WELCOME to the Australia! The country with the world’s cheapest energy sources that now boasts the world’s highest electricity prices!

ENERGY rationing has always been a key feature of the Left’s misanthropic agenda of deindustrialisation, enforced through punitive emissions controls, protected under the guise of anthropogenic ‘climate change’ – the emotionally driven eco-cause engineered by the environmental movement in the 1970’s who realised that doing something about supposed catastrophic man-made global warming would play to quite a number of the Left’s social agendas.

STANFORD University and Royal Society’s resident global warming alarmist and population freak Paul R. Ehrlich spelled out the deindustrialisation objective with this attack on energy in 1976:

EHRLICH also wanted to poison black African’s in order to fight climate change. But, we’ll leave that conversation for another day. Ahem.

FORMER Australian PM Julia Gillard, who implemented Australia’s ill-fated 2011 carbon tax, was open in expressing its core function to ‘drive substantial changes in patterns of energy production and energy use.’

IN 2016, Victoria’s premier Dan Andrews took his State one step closer to Ehrlich and U.N. Strong’s energy-free utopia, with the closure of Hazelwood coal-fired power station, culling 22% of Victoria’s cheap, reliable energy supply and flipping the state from a power exporter to an importer.

COAL-fired power plant closures have become the order of the day for Australia’s virtue-signalling and global warming theory-obsessed political class who think that destroying the country’s industrial heartland, and imposing crippling energy-poverty on its citizens is a worthwhile price to pay for “saving the planet”.

END_OF_DOCUMENT_TOKEN_TO_BE_REPLACED

SUCH an important and informative weekly piece of (hard) work! Aside from the excellent information provided on the breakdown of energy sources used to power the Australian electrical grid, the main figure in contention is highlighted in red – the percentage of coal-fired power used per day versus all other sources of generation. Not surprising that of a day, coal-fired power generates more than 75% of all energy with wind and solar only ever supplying between 5 and 20% max of intermittent, expensive, unreliable and grid destabilising ‘power’. This despite unreliable-energy states having upwards of 50% capacity installed. It’s no wonder Australia’s electricity prices are among the highest in the world. South Australia officially ‘the highest’ with the highest penetration of highly subsidised unreliables – wind, solar….and a giant battery.

This is the continuing Post, where each Saturday, I will detail the power consumption for the Base Load in Australia for the previous week. This will show what is actually meant by the term Base Load, and that is the minimum daily power consumption at its lowest point. Power consumption never falls below this point.

Here in Australia, that level of power is 18,000MW. (See data for the Running Weekly Average For Base Load below) 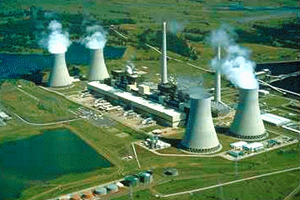 This data I have collated below is for this last week, and is for the five States connected to the Australian grids, every State east of the Western Australian border, and here I will show that data for each of those five States, New South Wales, Queensland, Victoria, South Australia, and Tasmania.

As you can see from these…

“Incredible, to have green groups campaign to keep the poorest people poor. And to cost Australians money and jobs while doing so.”

No surprise, as Green groups are proud misanthropists who despise humans – except themselves of course.

So what is the Turnbull Government doing to save these mines and jobs? 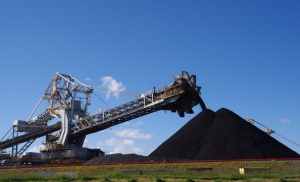 Indian Power Minister Piyush Goyal told The Australian yesterday the years of legal challenges to the vast Carmichael coal project, now revealed to have been funded by multi-million-dollar foundations in the US, “will certainly dampen future investments” from India…

After meeting Mr Goyal, federal Resources Minister Matt Canavan, who has previously criticised the campaign to block the Indian project, said: “We need to be able to take advantage of the demand for coal in Asia.”…

“…careful scrutiny of the available wind farm operational data shows that, on the eastern Australian grid, it is not possible for wind energy ever to displace dispatchable, reliable generation supplying the base load demand. In this regard, an examination of the graphs comprising Figure 3 clearly indicates that the proposal by some Australian policymakers to replace major coal-fired power stations with a fleet of wind farms is not technically achievable.

Additionally, the analysis shows that further increased wind penetration, even if spread evenly across the eastern Australian grid, will result in an increasing contribution to grid instability, potentially making wind energy an increasing threat to grid operational security and reliability. To continue a policy strategy to increase wind penetration across the eastern Australian grid, to seek to meet a target of some 20% installed capacity, as has already been achieved in South Australia, (with the presumption that wind may thereby meet 20% of base load requirements), has the potential to be a dangerous strategy.

To address the increased instability due to wind, a fleet of fast-acting OCGT generation plant may well be required to back up wind’s intermittency. The use of a significantly greater proportion of this form of generation, rather than the more thermally-efficient CCGT, in the gas-fired generation plant mix may lead, seemingly paradoxically, to both higher gas consumption and higher GHG emissions from the resulting OCGT/CCGT generation mix than if wind generation was not included in the generation portfolio. “

Even The Godfather Of Global Warming Alarmism James Hansen Admits Renewable Energy Is A ‘Nice Idea’ Though Useless :

Former NASA climate commissar and eco-activist James Hansen admits what sceptics have been saying for years – renewable energy is useless.

“The hope that the wind and the sun and geothermal can provide all of our energy is a nice idea but I find it unlikely that that’s possible.”

“Suggesting that renewables will let us phase rapidly off fossil fuels in the United States, China, India, or the world as a whole is almost the equivalent of believing in the Easter Bunny and Tooth Fairy.”

Will environmentalists and policy makers heed the rare wisdom of the godfather of global warming and climate alarmism? Or is seeming (to be green) more important than reliable, clean energy solutions that work?

Or does embracing clean nuclear energy ignite “population bomb” fears amongst the Malthusians at the United Nations?

Land area and energy output of a typical fossil fuel site, in this case nuclear, compared to wind and solar :

Renewable Energy Association : This graph is “unhelpful” – delete it!

UK Gov : It was deleted “because of sensitivities”. 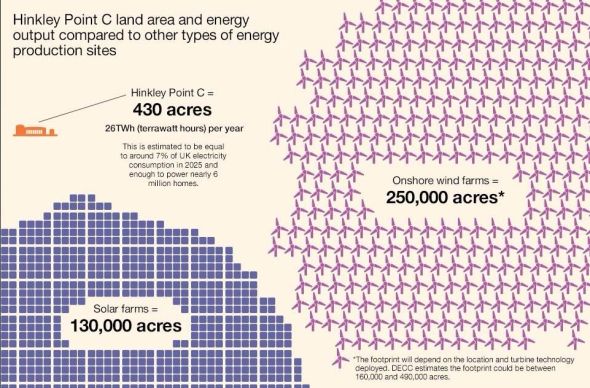 Nuclear power vs wind farms: the infographic the Government doesn’t want you to see

Hat-tip to our Energy Correspondent Emily Gosden for this Department of Energy & Climate Change infographic. It was deleted from Gov.uk this week “because of sensitivities”, according to a DECC press officer. “Hmmm,” says Emily. Quite.

It turns out that the Renewable Energy Association called it “unhelpful” in a press release, pleading that “as Ed Davey stressed… it is not an either/or choice”.

What’s going on at DECC? I’d hate to start a conspiracy, but did the infographic come from the Tory Energy Minister Michael Fallon’s people? Was it squashed by the Lib Dem Energy Secretary, Ed Davey?

Here (via @owenboswarva) is how the Government’s official Hinkley Point C news story looked on Wednesday:

Move along people, nothing to see here.

How much land is needed for wind and solar energy production