“…for the last month, solar power has been running at a tiny 4% of its capacity, with many days well below this.” 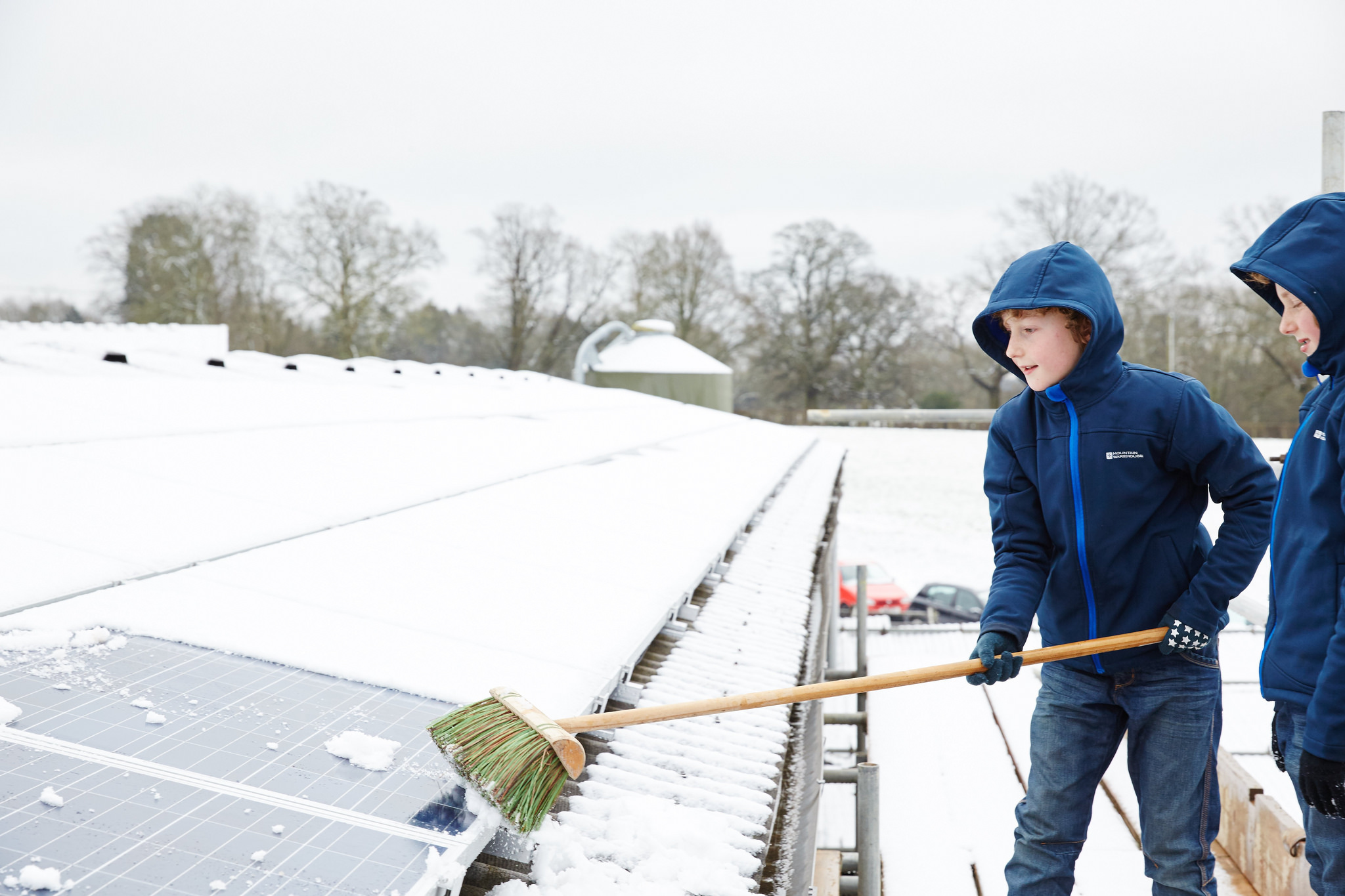 Wait till the Health & Safety Stasi see this!

The renewable lobby would like you to believe that solar power is an important part of our future energy strategy.

But they don’t tell you just how little power is produced during winter months, at the time when demand is at its peak.

“Mainstream politicians who put the green religion ahead of constituents struggling to feed their families, like the green leaning socialists currently presiding over South Australia’s misery, will have an increasingly difficult time winning elections in Australia.”

AUSTRALIA’S unreliable-energy crisis – entirely man-made, by climate theory-obsessed politicians from both sides of the aisle and a compliant mainstream media.

WATCH the rise of the true conservative parties at the next election – Pauline Hanson’s “One Nation” and especially, Cory Bernardi’s “Australian Conservatives”.

MORE than 102,000 South Australians seek help from food charity Foodbank every month, as parents skip meals for days on end so children can eat and utility bills can be paid, astonishing figures show.

About one quarter — or 26,877 — of those seeking food assistance are children.

The alarming figures have been released today in Foodbank’s 2017 Hunger Report, which also shows that demand from South Australians needing food has increased 21 per cent over the past 12 months, up from 84,847 last year and 56,000 the year before.

YOUR mad global warming policies and ruinously juvenile obsession with green power have rewarded South Australia with the World’s most expensive power prices, helping to destroy your economy and hurt the poor.

SA has the world’s highest power prices, Carbon and Energy Markets director Bruce Mountain says — so get off the grid

ESCAPING the electricity grid by pairing solar panels and new battery technology is the best way for SA households to escape the world’s most expensive power prices, a top expert says.

Carbon and Energy Markets director Bruce Mountain revealed in June that he was working on a study that found SA was passing Denmark as the most expensive place in the world to keep the lights on.

He has now published the results, which conclude SA’s prices are three times that recorded in the US and about 50 per cent higher than the UK.

SA has the world’s highest power prices, Carbon and Energy Markets director Bruce Mountain says — so get off the grid | Adelaide Now

THE solution? “Escape the electricity grid by pairing solar panels and new battery technology…” ! That’s all good and well for those who can afford the luxury of solar panels and their (toxic) battery backup systems.

And, what for businesses and heavy industry – the one’s that still remain? Use Elon “Taxpayer subsidy-sucking vampire” Musk’s $200 million giant battery pack that could have enough battery storage to replace wind power for a whole minute (maybe 2), should the wind stop?

Like the old sailors say, “The wind is free, but everything else costs money”.

THERE’s always the DIY options that are being fitted by SA businesses and households living in fear of routine load shedding, mass blackouts and “the world’s highest power prices” :

BUT, aren’t these “industrial diesel generators” and LPG solutions simply going back to “dirty” fossil fuels – the same (cheap, reliable, efficient) hydrocarbons that freak out the Green faith?!

There certainly is no sense, reason or cost benefit analysis when you enlist in the Green faith.

BECAUSE, consider also, that as more solar and wind generators come online, as Jay has planned, the demand will rise for more backup power from “dirty” fossil fuel plants to fill the gaps and keep the grid stable when the wind doesn’t blow or the wind don’t shine. The result – adding even more CO2 emissions to the atmosphere. Not a good result if (plant food) CO2 is your ideological enemy.

BUT here is the ultimate craziness. All the money, all the wrecking of views, all the lost jobs through higher electricity prices and all the blackouts – all the pain for nothing. The effect on global temperatures so incredibly small, nobody would notice.

Neighbouring State, Victoria, whose Socialist Left government is also obsessed with green energy and the climate faith has closed Hazelwood coal-fired power station, which did not merely supply Victoria with a quarter of its power but also helped bail out South Australia.

Come the hot Australian summer in a few months time, this situation is going to spiral way, way out of control. Bookmark it.

TURKISH ‘Power Ship’ Proposed To Keep The Lights On In South Australia!

What do all these countries have in common? They are all third world, mostly war-torn countries who have relied on ship-mounted power plants to overcome chronic electricity shortages.

A Powership as displayed in the Karpowership Brochure

The “power ship” barge is owned by Istanbul-based firm, Karpowership and comprises 11 towering steel stacks or chimneys that resembles a sort of floating Battersea power station.

A 250 MW ship-based power station is under consideration as a solution to the crisis for the Australian state, which has seen an over-investment of ‘unreliable’ energy – wind and solar. While cheap, reliable, baseload fossil fuel power stations were retired (blown up)…

Playford coal-fired power station in Port Augusta — put out of business by Labor’s green policies — had its towers brought down by explosives.

What does this say about the Jay Weatherill Socialist/Green/Labor SA government and its insane global warming policies?!

Opposition politicians are critical of the move, saying that using such ships, typically sent to war ravaged regions, shows the government’s poor decision making on power policy, linking it to the increase in residential electricity bills.

If it weren’t so serious for the livelihoods of South Australian’s and their flailing economy, it would be hilarious.

* I genuinely thought this article was a parody on the SA energy debacle when I first read about it via our friend’s over at Tallbloke’s Talkshop!

You literally can’t make this stuff up…

A large-scale temporary power solution is being considered, as South Australia struggles to ensure its energy security.

A 250 MW ship-based power station is under consideration as a solution to the crisis for the Australian state, which has seen a lot of investment in renewable power over recent years, while old fossil stations were retired.

The Turkish ship could be operational by the end of the year for less than the $360m budgeted for a new state-owned gas-fired power plant of the same capacity.

The ship-based plant would plug into the high-voltage grid near the 479 MW Pelican Point power station, which returns to full capacity on July 1.

A second option would be for a 125 MW Powership at Outer Harbor and another of the same size anchored off Port Augusta, plugging into the grid near the site of the defunct Northern power station.

The Powership fleet can operate on natural gas, liquid natural gas or heavy fuel oil and it is likely the ship would be leased until a permanent plant was built.

The Istanbul-based firm, Karpowership, has installed the barge or ship-mounted power plants in Ghana, Iraq, Lebanon, Indonesia, Zambia, and Mozambique.

A national electricity market operator report released this week reveals a government-backed battery, temporary generators and every power station in the state must be up and running in tandem to prevent blackouts in the state this summer.

Adelaide Now online reports that opposition politicians are critical of the move, saying that using such ships, typically sent to war ravaged regions, shows the government’s poor decision making on power policy, linking it to the increase in residential electricity bills.

“The disastrous energy policies that have been put in place since John Howard dipped our toes into the renewable con at the end of the last century is now bearing fruit with major closures of the unsubsidised plant bringing about contract prices now well above $100 per MWh, two to three times their average level 1999-2015.”

John Howard was seen by many as the underdog of Australian conservative politics, who took more than two decades as a Federal MP to reach the position of Prime Minister, the victim of bitter internal political wrangling and intrigue within the Liberal Party.

After he was deposed as Liberal opposition leader by Andrew Peacock in a leadership coup in May 1989, Howard likened his chances of ever leading the Liberals again as that of “Lazarus with a triple bypass”.

Clearly the beneficiary of some cardiac miracle, John Howard became Australia’s 25th Prime Minister on 11 March 1996 and kept that post for over 11 years, until 3 December 2007, making him Australia’s second longest serving PM after Bob Menzies.

While Howard, as with any politician, had his critics, no one could question his devotion to principle and efforts…

While the Democratic People’s Republic of America struggles to reduce emissions by 5%, North Korea has already achieved an 80% reduction.