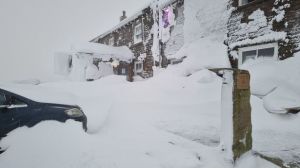 Tan Hill Inn [image credit: North Yorkshire Weather]
The BBC says ‘Customers and an Oasis cover band are trapped at the Tan Hill Inn, near Keld, after heavy snowfall.’ It’s still only November, and the Met Office has forecast a mild winter. In fact parts of Scotland and the English North East also had wintry conditions with all kinds of damage going on.
– – –
A number of people had to sleep on the floor of Britain’s highest pub after Storm Arwen battered Yorkshire.

Twenty people, including an Oasis tribute band, were unable to leave the Tan Hill Inn in the Yorkshire Dales after being snowed in on Friday.