SUPERB Demolition Of The ‘97% Consensus’ Myth 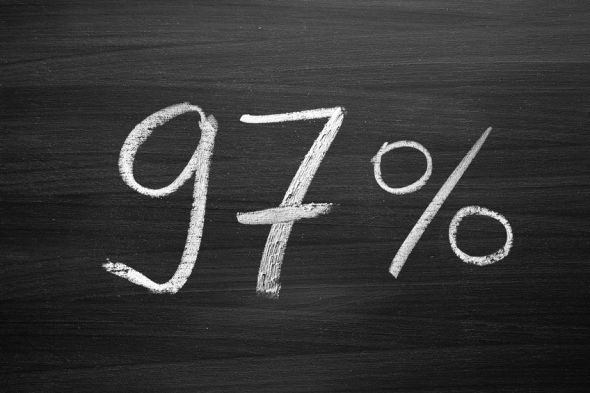 A must watch demolition of the “97% Consensus” myth. Ping this to anyone claiming that there is a scientific consensus on CO₂ as the primary driver of earth’s climate.

97 Percent of scientists believe in catastrophic human caused climate change? Of course not! But far too many believe this ridiculous statement that defies basic logic and observation. (Can you think of any highly-political issue where you could get even 65% agreement?) The 97% Myth has succeeded in fooling many people because the phony number is repeated over and over again by those who have a financial and/or ideological stake in the outcome. By the way, what any scientist “believes’ doesn’t matter anyway. Science is what happens during rigorous and repeated experimentation.

“Historically, the claim of consensus has been the first refuge of scoundrels; it is a way to avoid debate by claiming that the matter is already settled. Whenever you hear the consensus of scientists agrees on something or other, reach for your wallet, because you’re being had.”
― Michael Crichton

CLIMATE models from the 1970’s have consistently predicted that theorised CO2-induced climate change should be causing a significant decline in total snow cover. However, Global snow cover has actually increased since at least the start of the record (Connolly et al, 2019), leading to some scepticism within the scientific community about the validity of the climate models.

ANOTHER ‘snow rich’ Nordic winter isn’t helping the climate model cause, one bit …

NB// Accompanying image is “intended as a joke.” (Tallbloke’s Talkshop)

Was it like this?
This story may not make headline news, so let’s give it an airing here. Nordic countries are well used to winter snow, so when they talk of a ‘snow-rich’ winter they mean exactly that.
– – –
Electricity prices in the Nordic countries are likely to be unusually low this summer amid high inflows to hydropower plants, caused by a combination of a very snow-rich winter and late snowmelt, says Phys.org.

Electricity prices in the Nordic countries are likely to be unusually low this summer amid high inflows to hydropower plants, caused by a combination of a very snow-rich winter and late snowmelt.

“May was cooler than normal in Scandinavia and June has also started on the cool side. This has led to snowpack melting a bit later than it usually does,” Nathalie Schaller, a senior researcher at CICERO Center for International Climate Research, said…