HOW DARE HE! United States Led Entire World In Reducing CO₂ Emissions In 2019 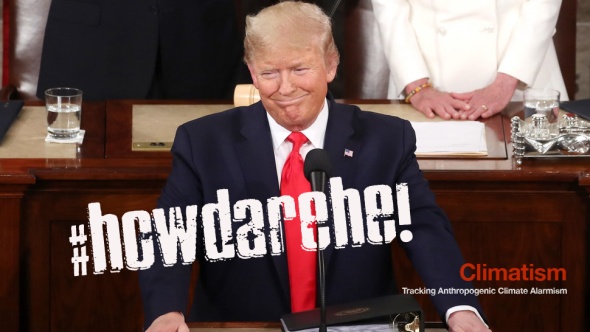 “Action must be powerful and wide-ranging.
After all, the climate crisis is not just about the environment.
It is a crisis of human rights, of justice, and of political will.
Colonial, racist, and patriarchal systems of oppression have created and fueled it.
We need to dismantle them all.”
–– GretaThunberg™️

CLIMATISM has reported here, here and here on the inconvenient fact that the United States, under the Trump administration (and reluctantly under Obama), has witnessed a decline in CO₂ emissions thanks to technology (Fracking/natural gas extraction) and private sector innovation.

THE mainstream media refuses to report ‘planet-hating’ Trump’s America reducing ‘evil’ CO₂ emissions, while the rest of the planet, in particular the ‘green’ centrally-planned EU, has seen rises in its emissions. 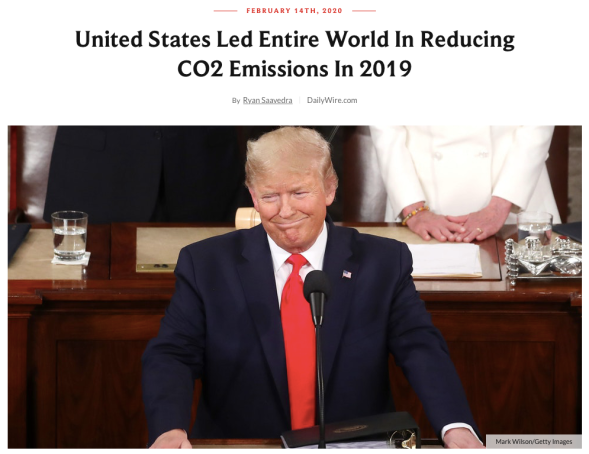 “The United States saw the largest decline in energy-related CO2 emissions in 2019 on a country basis – a fall of 140 Mt, or 2.9%, to 4.8 Gt,” The International Energy Agency (IEA) reported on Tuesday. “US emissions are now down almost 1 Gt from their peak in the year 2000, the largest absolute decline by any country over that period.”

“A 15% reduction in the use of coal for power generation underpinned the decline in overall US emissions in 2019,” the IEA continued. “Coal-fired power plants faced even stronger competition from natural gas-fired generation, with benchmark gas prices an average of 45% lower than 2018 levels. As a result, gas increased its share in electricity generation to a record high of 37%. Overall electricity demand declined because demand for air-conditioning and heating was lower as a result of milder summer and winter weather.

Sen. Ted Cruz (R-TX) responded to the news by writing on Twitter, “FACT you will NEVER see on the 6 o’clock news: U.S. emissions FELL 2.9%, or by 140 million tons, continuing the trend of the United States LEADING THE WORLD IN TOTAL EMISSIONS DECLINE since 2000.”

The news came after the media promoted far-left climate extremists like socialist Rep. Alexandria Ocasio-Cortez (D-NY) and Greta Thunberg who demonized the U.S. and economic growth for polluting the world.

Thunberg attacked the U.S. last month during a speech she gave at the World Economic Forum in Davos, Switzerland for leaving the Paris Climate Accord, despite the fact that the U.S. leads the world in reducing CO2 emissions.

“The fact that the U.S.A. is leaving the Paris accord seems to outrage and worry everyone, and it should,” Thunberg said. “But the fact that we’re all about to fail the commitments you signed up for in the Paris Agreement doesn’t seem to bother the people in power even the least.”

IMAGINE the red-faces if the mainstream media, for once, honestly reported that spending hundreds of billions of €uros, of other people’s money, on unreliable energy – wind and solar – was actually increasing CO₂ emissions, where fracking for natural gas (a “dirty” fossil fuel) was lowering them!

ANOTHER smart move by Trump in not signing the latest UN wealth redistribution scheme when Europe, the epicentre of draconian climate change policy and green energy madness, cannot meet its own emissions ‘commitments’ despite spending hundreds of billions of taxpayer €uros on failed ‘green’ energy. 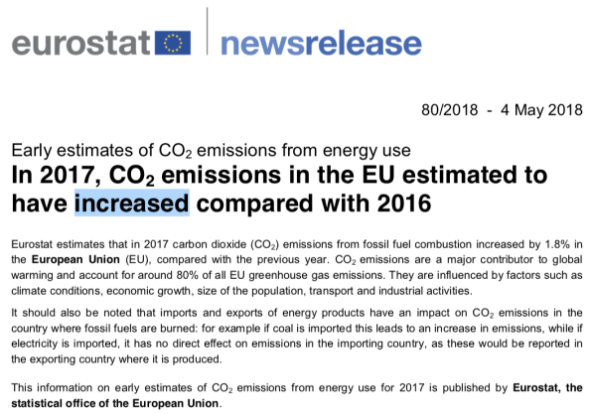 CO2 emissions from energy use for 2017 published by Eurostat, the statistical office of the European Union.

URELIABLE-energy propagandists claim that wind, solar and other weather-dependent ‘energy’ sources will “Save The Planet” by lowering plant-food CO₂ emissions. But, the opposite is the case.

WHY ARE CO₂ EMISSIONS RISING WHEREVER ‘GREEN’ ENERGY IS PROLIFERATED?

ONE inconvenient reason for the rise in ‘green-CO₂’ emissions that you won’t hear reported on MSM news, ever…

The Growth Of Fossil Fuel Energies 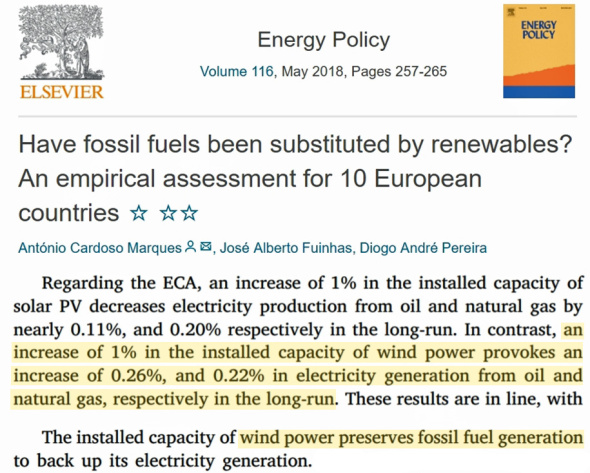 THE unspoken truth about renewables, neatly summarised in a 2012 Los Angeles Times analysis :

“As more solar and wind generators come online, … the demand will rise for more backup power from fossil fuel plants.”

FULL article, entitled “Rise in renewable energy will require more use of fossil fuels” also points out that wind turbines often produce a tiny fraction (1 percent?) of their claimed potential, meaning the gap must be filled by fossil fuels.

WHAT’S happening in Germany is, unfortunately, a bellwether for what is to come in other CO₂-theory obsessed Western nations attempting to make UNreliables the kingpin of their electricity grids.

GERMANY’s wind and solar experiment has been exposed as a catastrophic failure with rampant energy poverty and an industrial heartland decimated, leading to an expansion of new generation HELE coal-fired power plants.

IT seems forever unlikely that the climate communists will ever concede and promote smart energy solutions like HELE-coal, gas or nuclear. All proven base-load technologies that reduce CO₂ emissions while maintaining a high standard of living by keeping power prices down. A far better result than ‘green’ Germany’s efforts under the 1/2 trillion Euro Energiewende debacle.

PERHAPS they don’t want solutions to their CO₂ hysteria? Perhaps it’s more lucrative to kick the climate can down the road and see how much more climate coin and political power it spits out?

ORIGINS Of The ClimateChange™️ Scam :