← DEATH OF A CLIMATE ICON : A Lesson For Researchers In Other Areas Who Have Failed To Stop The Invasion Of Politics Into Their Science
GLOBAL Wildfire Area Has Declined, Contrary To Popular Myth →

HH Lamb & The Great Storms Of The Little Ice Age

OF particular interest is the “strengthened thermal gradient” refereed to by Hubert Lamb as contributing to the storminess of the LIA. That is, loosely, the increased difference between polar and equatorial temperatures leading to increased atmospheric disturbance. Ergo, in a warming world we would expect less “extreme weather” events, and current data bears this out, precisely…

With stormy weather in the news at the moment, it is worth recalling what HH Lamb had to say about the prevalence of storms in the Little Ice Age. From his book, “Climate, History and the Modern World”:- 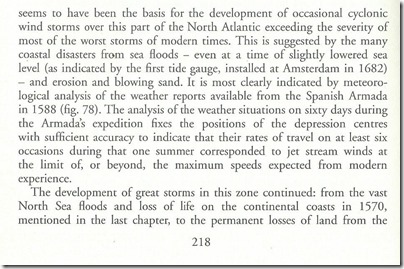 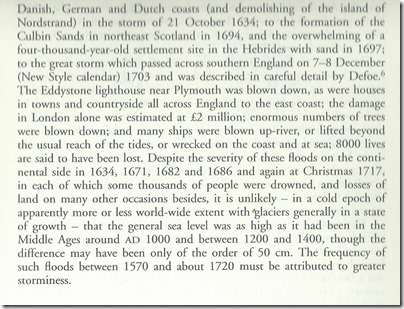 It is a clear reminder that, in this part of the world at least, storms tend to be much worse in a colder world.

The other point of interest, however, is his reference that sea levels may have been 50cm lower than between AD 1000 and 1400. This of course refers to the period around 1700, and we don’t have much idea of how far sea levels rose in the 18thC.

It is generally accepted though that since the late 19thC they have risen by maybe 20 cm. This is strong evidence that current sea level rise is simply part of a much longer term pattern.