Although it is still 3-4 days away, rapidly strengthening Hurricane Florence is increasing the threat of a major hurricane landfall somewhere within 120 miles or so of Wilmington, NC. If it reaches that area as a Cat 4 storm, the damage produced will be extensive, likely amounting to tens of billions of dollars.

As we all know, these are people who lead by example in their efforts to reduce their so-called carbon footprints.

NBC NEWS : Global Warming Will Likely Cause A Noticeable Shift In Our Appearance

NBC News on Twitter – Global warming will likely alter the internal workings of our bodies — and cause a noticeable shift in our appearance.

GOTTA love how 1 extra CO2 molecule per every 10,000 atmospheric molecules can change the way we look!

Without the Alinsky method propaganda campaign, no-one would have any sense that anything unusual is occurring re the weather.
It would be a non-conversation.
That might be because we live in one of the most stable periods of weather in modern history. 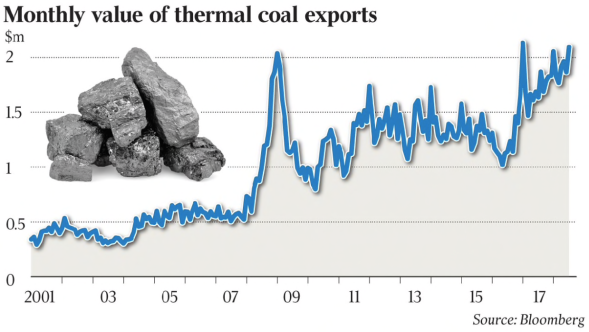 AUSTRALIAN high-energy, thermal coal export earnings and volumes are running at record rates on the back of strong Asian power station demand. While it is early days, the July 2018 revenue figure is 31 per cent up on July 2017.

ACCORDING to the ABS data, July’s combined coal exports beat iron ore for the third straight month, coming in at $5.58bn, compared to iron ore’s $4.74bn.

CHINESE coal-fired power generation was up 7.3 per cent in the first seven months of this year, from a year earlier.

AND Australia’s higher-quality coal, in terms of energy content, is being favoured over domestic mines and import competitors such as Indonesia as China tries to combat air pollution.

THE strength in coal prices has favoured those prepared to invest against a growing campaign and activism against thermal coal.

MEANWHILE, in Australia, global warming theory-obsessed politicians of both major parties and persuasions are giving up the countries once prized economic advantage of having cheap, reliable energy, by decommissioning and blowing up their last remaining coal-fired power plants. The Greens and Labor parties even cheering the economic vandalism…

NEIGHBOURING State, Victoria, whose Socialist, Hard Left government, with an obvious obsession with ‘green’ energy and the climate faith has closed Hazelwood coal-fired power station, which did not merely supply Victoria with a quarter of its power but also helped bail out South Australia who are now largely dependent on sunshine and breezes for their energy security.

ALL this destruction of Australia’s once cheap, efficient, relaible, baseload power supply has led to Australia now having some of the highest power prices in the world. South Australia officially “the highest“… 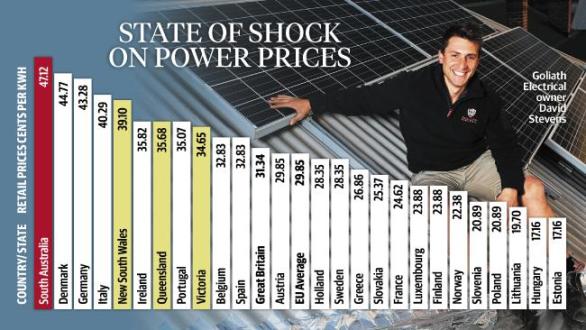 THE world has got the message: South Australia is closed for investment in heavy industry, and so, soon, will be the rest of Australia if they don’t learn from the dire consequences of destroying cheap power.

AUSTRALIA’S politicians, intent on appeasing the UN climate gods, over its own citizens, continue the mad and ruinous rush into unreliable-energy – wind and solar – assuring rampant energy poverty by denying its own citizens the use of the miracle black rock that provides cheap, reliable and increasingly ultra-clean energy via new generation Supercritical and HELE (High Energy Low Emissions) coal-fired power plants currently being built in Asia and across the globe…

The ultra-supercritical Shanghai Waigaoqiao No. 3 is one of China’s flagship high-efficiency, low-emissions coal-fired power plants.

From The New York Times

“1,600 new coal-fired power plants are planned or under construction in 62 countries.”

“1,600 new coal-fired power plants are planned or under construction in 62 countries.” – NY Times

DON’T expect to hear or read about the massive expansion of global coal-fired power stations or Australia’s record coal exports via the majority Leftist press.

THE Pravda mainstream media wants you to think that wind and solar are booming. The opposite is, of course, the truth.