Roger Federer Is Tough to Beat. Global Warming Might Have Pulled an Upset. – The New York Times

Roger Federer, one of the world’s greatest tennis players, may have become an unwitting spokesman for the effects of climate change on Monday at the U.S. Open.

Federer, who is ranked No. 2, seemed to struggle all night in the heat and humidity at Arthur Ashe Stadium, losing in a fourth-round upset to John Millman, an Australian ranked 55th.

“It was hot,” Federer said. It “was just one of those nights where I guess I felt I couldn’t get air; there was no circulation at all.”

This was the first time Federer, who won the U.S. Open five consecutive times from 2004 to 2008, lost to a player outside the top 50 at the tournament.

To some, the comments by Federer, 37, may sound like sour grapes. But they also underscore a growing problem: increasing nighttime temperatures.

Under climate change, overall temperatures are rising — 2018 is on track to be the fourth-warmest year on record — but the warming is not happening evenly. Summer nights have warmed at nearly twice the rate of summer days. Average overnight low temperatures in the United States have increased 1.4 degrees Fahrenheit per century since 1895, according to the National Oceanic and Atmospheric Administration.

TONY HELLER aka Steve Goddard of Real Science recently checked temperature trends at Ithaca NYC as part of a rebuttal to another piece of epic NYT climate propaganda and fraud – “How Much Hotter Is Your Hometown Than When You Were Born? – The New York Times”

WATCH the blatant fraud uncovered by Heller in this MUST SEE vid:

WHILE Heller’s work on the NY area at Ithaca doesn’t explore humidity, his analysis, using USHCN offical Govt data, shows that the number of hot days over 90F are declining as CO2 increases – the opposite of what global warming CO2-theory demands. And, shock news, Heller’s data shows the exact opposite of what the failing NYTimes impugns…

Posted on September 1, 2018 by tonyheller

The New York Times claims that Ithaca, New York gets about three days per year over 90 degrees, when in fact they average almost double that. 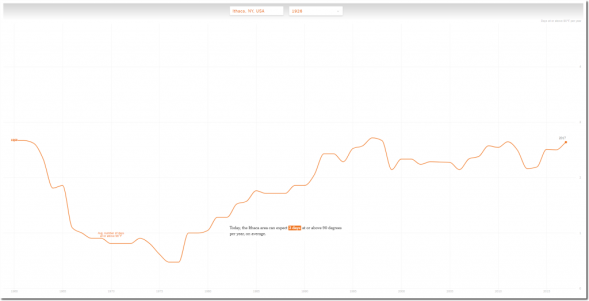 How Much Hotter Is Your Hometown Than When You Were Born? – The New York Times

The number of 90 degree days has declined by 50% over the last 90 years, as CO2 has increased.

The New York Times claims the opposite trend. 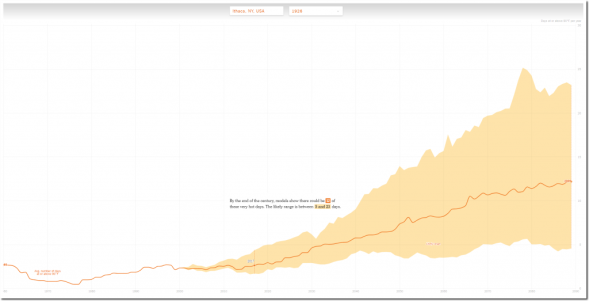 How Much Hotter Is Your Hometown Than When You Were Born? – The New York Times

A large percentage of New York Times reporting is fraudulent, and sometimes it is trivial to prove. They are hiding readily available historical data, reporting incorrectly on historical and present data, and claiming trends which are the exact opposite of reality. Scientific and journalistic fraud at its worst.

AS an Aussie, bravo to John Millman for downing the Fed! And, obviously he had to play under the same conditions as the champ. Just maybe, Millman was the better player on the ‘humid’ night in NYC and in better condition than ye olde Rog, God bless him!

AS for the failing NY Times – “Scientific and journalistic fraud at its worst.” – we and the empirical evidence concur!

This is NOT a joke –>
NY Times blames global warming for Roger Federer's stunning upset last night at the U.S. Open https://t.co/L1WbuA9BzU pic.twitter.com/77dQ3B2T9A