ACCORDING to NASA data, the recent 0.56°C plunge in global temperatures, following the 2015/16 super El Niño, is the greatest two-year cooling event in a century. “You have to go back to 1982-84 for the next biggest two-year drop, 0.47°C—also during the global warming era.”

NASA’s MSU satellite measurement systems, generate the RSS and UAH datasets, which measure the average temperature of every cubic inch of the lower atmosphere (0-10 kms), the exact place where global warming theory is meant to occur.

MAY TEMPS +0.18C ABOVE AVERAGE

GLOBAL temps continue their cooling trend, rebounding off the 2015/16 Super El Niño – the strongest since accurate measurements began, caused by surface waters in the Pacific Ocean, west of Central America rising up to 3C warmer than usual.

THE latest UAH V6.0 May anomaly of +0.18 brings temperatures back to the levels they were at the beginning of the Century, reinforcing the current 18+ year global warming “pause”, despite record and rising CO2 emissions… 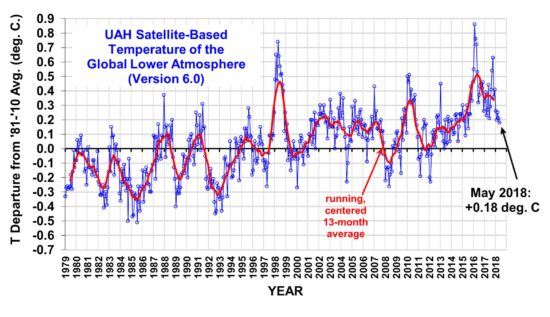 Since 1979, NOAA satellites have been carrying instruments which measure the natural microwave thermal emissions from oxygen in the atmosphere. The intensity of the signals these microwave radiometers measure at different microwave frequencies is directly proportional to the temperature of different, deep layers of the atmosphere. Every month, John Christy and I update global temperature datasets that represent the piecing together of the temperature data from a total of fifteen instruments flying on different satellites over the years. A discussion of the latest version (6.0) of the dataset is located here.

The graph above represents the latest update; updates are usually made within the first week of every month. Contrary to some reports, the satellite measurements are not calibrated in any way with the global surface-based thermometer records of temperature. They instead use their own on-board precision redundant platinum resistance thermometers (PRTs) calibrated to a laboratory reference standard before launch.

GLOBAL TEMPERATURE MEASUREMENTS – JUDGE FOR YOURSELF!

NASA’s MSU satellite measurement systems, generate the RSS and UAH datasets, which measure the average temperature of every cubic inch of the lower atmosphere, the exact place where global warming theory is meant to occur.

BEFORE 2016, UAH and RSS both tracked closely showing very little warming in their data sets which led to the identification and validation of “the pause” in global warming which has since become the subject of much research and debate in peer-reviewed scientific journals.

“The simulation as a whole are predicting too much warming” – RSS 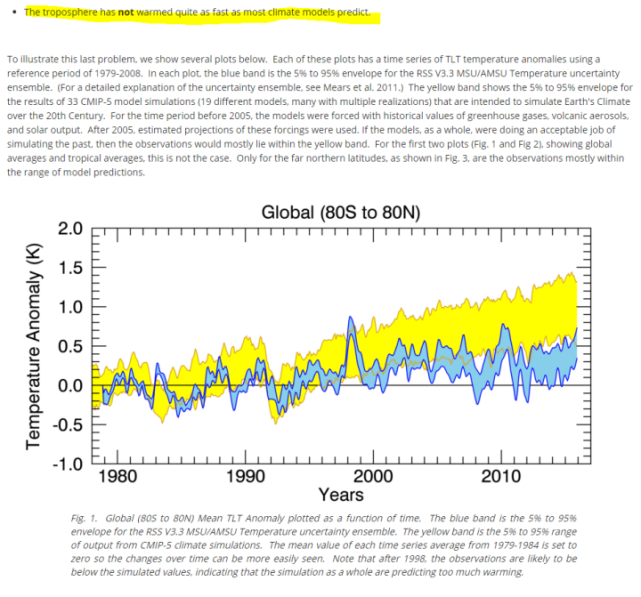 HOWEVER, by 2016, Carl Mears, who is the chief scientist for RSS (Remote Sensing Systems) and who has used the pejorative “denialist” in various correspondence, decided that “the pause” was not a good look for the global warming narrative so RSS was massively adjusted upwards, conveniently eliminating “the pause” in the RSS dataset.

Mears’ objectivity towards the business of global temperature data collection and reporting can be found in his commentary on his website: 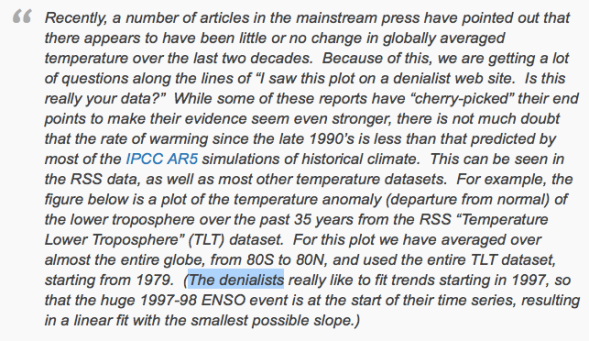 MEARS then published a paper claiming that new and improved adjustments have “found” that missing warming.

THE result…
Differences between the old version and new version of RSS:

Spencer commentary on the divergence between RSS and UAH post “adjustment”:

“We have a paper in peer review with extensive satellite dataset comparisons to many balloon datasets and reanalyses. These show that RSS diverges from these and from UAH, showing more warming than the other datasets between 1990 and 2002 – a key period with two older MSU sensors both of which showed signs of spurious warming not yet addressed by RSS. I suspect the next chapter in this saga is that the remaining radiosonde datasets that still do not show substantial warming will be the next to be “adjusted” upward.

The bottom line is that we still trust our methodology. But no satellite dataset is perfect, there are uncertainties in all of the adjustments, as well as legitimate differences of opinion regarding how they should be handled.

Also, as mentioned at the outset, both RSS and UAH lower tropospheric trends are considerably below the average trends from the climate models.

And that is the most important point to be made.”

A translation (square brackets) of Gavin’s admissions just for fun . Though many truths in it…

IT’S not difficult to see why the fake NASA GISS data set is the preferred go-to for global warming activists, mainstream media, the UN IPCC and politicians seeking to destroy cheap, efficient power supply (coal) through the implementation of draconian climate change policy, therefore assuming total control of your life… 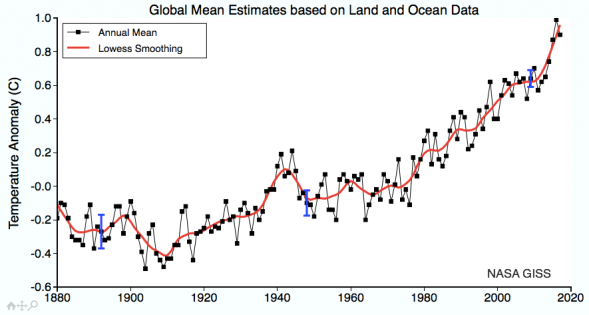 “The Pause” – well and truly wiped from the record, with vengeance!

NASA has doubled global warming since 2001:

NASA make up make up record temperatures in countries where they have no thermometer data. NOAA’s current data in Africa and much of the rest of the world is fake:

NASA has massively altered their US temperature data since 1999, to make a 1930-2000 cooling trend disappear:

Changes to GISS Iceland temperatures between V2 and V3

PRESIDENT EISENHOWER WARNED US OF THE “danger that public policy could itself become the captive of a scientific-technological elite.”

“The prospect of domination of the nation’s scholars by Federal employment, project allocations, and the power of money is ever present — and is gravely to be regarded.

Yet, in holding scientific research and discovery in respect, as we should, we must also be alert to the equal and opposite danger that public policy could itself become the captive of a scientific-technological elite.”

NASA GISS’ Gavin Schmidt wants to use his junk science to control public policy, and says questions from policy makers are “tiresome.”

Changes to GISS Iceland temperatures between V2 and V3

(Climate rationalists – you and I  – are still waiting for that “big oil” cheque to arrive in the mail!)