Here is Why the Left is Officially Insane

Spot-on Gjihad. The Left, the not so “tolerant, peaceful, diverse, inclusive or kumbaya” champions that they claim to be.

It finally built up from the election of Donald Trump as President of the United States to now to demonstrate how insane the Left truly is. All of the riots, lootings, shootings and multiple political demonstrations all lead to two news stories that finally prove the Left has not been radicalized, they are radicals.

This past Saturday, a well-known proponent of gay rights and environmentalist named David Buckel set himself on fire in Prospect Park in New York City as a means to warn people that the Earth is in big trouble due to human activity. Ironically, Buckel used a fossil fuel in order for his tragic act to be successful.

Pollution ravages our planet, oozing inhabitability via air, soil, water and weather, Buckel said in his suicide note. Our present grows more desperate, our future needs more than what we’ve been doing.

In Los Angeles, California, at a cost…

“In order to ‘encourage’ SA’s fossil fuel fleet into action, the grid manager was forced to pay a spot price of $5,077 per MWh…” 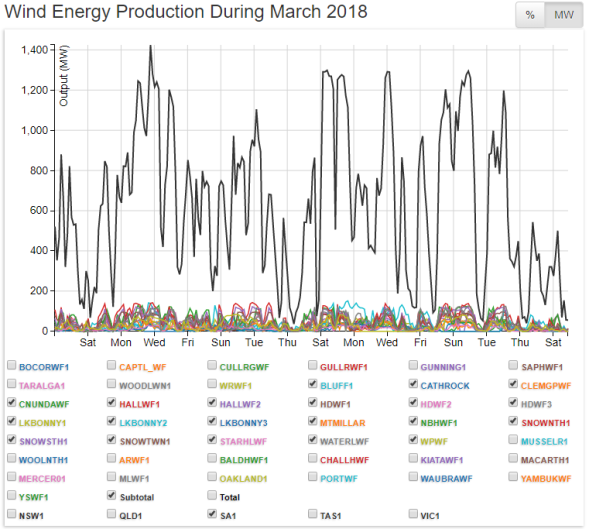 Wind power outfits often claim that their particular operation ‘powers’ 30,000 homes; RE zealots even claim that South Australians get 50% of their power from the sun and wind.

Whacked with the obvious retort of ‘when?’, the wind cultist changes tack and starts mumbling about mega-batteries (non-existent and insanely costly), pumped hydro (non-existent and costly) and then starts ranting about an evil fossil fuel conspiracy.

South Australia is the shining example of the true cost and absolute chaos that comes with attempting to run on sunshine and breezes.

Set out above, courtesy of Aneroid Energy, is the output from every wind turbine in SA during the merry month of March (with a notional capacity of 1,810 MW).

Can Humans Melt the Antarctic Icecap?

“My goal here is to show the enormous energy levels involved and how ridiculous it is to blame humans for any significant ice melt.“ – (Julius Sanks is an engineer and manager with experience developing weather forecasting systems and environmental satellites.)

Can we puny humans produce enough energy to melt the huge icecap? Some math helps.

When discussing climate with people who do not have technical backgrounds, I have learned much of the climate discussion is a foreign language to them.

Phrases like “Dalton minimum” or “Atlantic multidecadal oscillation” make their eyes glaze over. Once, after I explained what causes wind, the reply was, “my head hurts.” So, I no longer try to explain atmospheric science. Besides, I am an engineer, not a meteorologist. I have had better luck by sharing simple examples that let people reach conclusions on their own about human versus natural influence. Telling them I can show them the math if they want to see it adds credibility, because few, if any, alarmist publications intended for the general public include any math to support their claims. Describing…