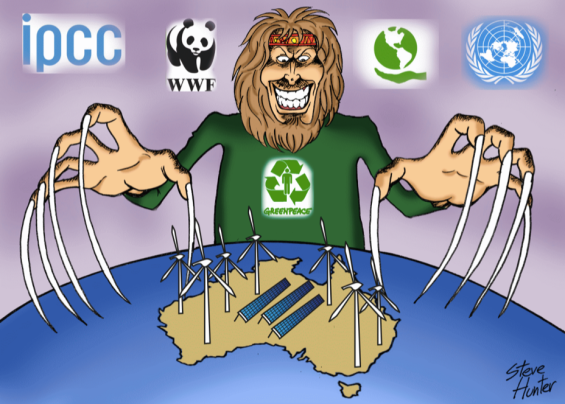 VIV Forbes, Chairman of the Carbon Sense Coalition, with the grim reality of what life looks like under the totalitarian rule of the feel-good ‘Greens’. The “zero-emissions” zealots who want to force us backwards down the energy ladder to the days of human, animal and solar power…

GREENS hate individual freedom and private property. They dream of a centralised unelected global government, financed by taxes on developed nations and controlled by all the tentacles of the UN.

No longer is real pollution of our environment the main Green concern. The key slogan of the Green religion is “sustainable development”, with them defining what is sustainable.

Greens hate miners. They use nationalised parks, heritage areas, flora/fauna reserves, green bans, locked gates and land rights (for some) to close as much land as possible to explorers and miners – apparently resources should be locked away for some lucky distant future generation. And if some persistent explorer manages to prove a mineral deposit, greens will then strangle it in the approvals process using “death by delay”.

Greens hate farmers with their ploughs, fertilisers, crops and grazing animals. They want Aussie grazing land turned back to kangaroos and woody weeds. They plan to expel farmers and graziers from most land areas, with food produced in concentrated feedlots, factory farms, communal gardens and hydroponics.

Greens hate professional fishermen with their nets, lines and harpoons. Using the Great Barrier Reef as their poster-child, they plan to control the Coral Sea using marine parks, fishing quotas, bans and licences, leaving us to get seafood from foreign seas and factory fish farms.

Greens hate foresters and grass-farmers. They want every tree protected, even woody weeds taking over ancient treeless grasslands. Red meat and forest timber are “unsustainable”. Apparently they want us to live in houses made of recycled cardboard and plastic and eating fake steak and protein powder made from methane generated from decomposing rubbish dumps.

Greens despise the suburbs with their SUV’s, lawns, pools, rose gardens, manicured parks, ponies and golf courses. They prefer concentrated accommodation with people stacked-and-packed in high-rise cubic apartments, with state-controlled kindies in the basement, and with ring-roads of electric trams and driverless cars connecting apartments, schools, offices and shops.

Greens lead the war on fracking and pipelines. The victims are energy consumers. The beneficiaries are Russian gas and Middle-east oil.

Greens think it is “sustainable” to uglify scenic hills with whining wind towers, power poles, transmission lines and access roads, and to clutter pleasant estuaries and shallow seas with more bird-slicing turbines. They think it is “sustainable” to keep smothering sunny flatlands under solar panels and filling the suburbs with extra power lines and batteries of toxic metals.

Greens hate free markets where prices are used to signal changing supply and demand. There is no room for fun, frills or luxuries in their “sustainable” world. They want to limit demand by imposing rationing on us wastrels – carbon ration cards, electricity rationing meters, water rationing, meat free days, diet cops and bans on fast foods and fizzy-drinks.

They also favour compulsory recycling of everything, no matter what that process costs in energy or resources. Surveillance cameras will keep watch on our “wasteful” habits.

None of this vast green religious agenda is compatible with individual freedom, constitutional rights or private property – and none of it makes any economic or climate sense.

The Despotic Green New World is coming. Climate alarm is the stalking horse, “sustainable development” is the war cry, and global government is the goal. 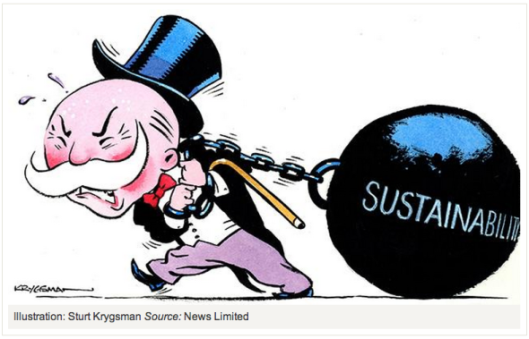 Sustainability is Malthusianism for the 21st Century | Climatism

SUSTAINABLE development lies at the heart of the United Nations’ and the Greens’ crooked ideology to extend the powers of government, raise taxes, weaken the capitalist system, curtail personal freedoms and “redistribute the world’s income through climate policy“.

Nick Cater on the dogma of sustainability that is polluting the Australian school curriculum:

…Thus the corporate sector has surrendered to the dispiriting dogma of sustainability, the heresy that took hold among the hippies in the late 1960s and mutated into a misanthropic, deep green movement in the 70s.

Today it wears a pinstriped suit and sits in the boardroom signing off on the most egregious muddle-headed nonsense in the name of corporate responsibility.

Sustainability may present itself as harmless mumbo-jumbo that helps build a brand, but its underlying philosophy is antithetical to freedom and to enterprise.

“The uncontested absurdities of today are the accepted slogans of tomorrow,” Ayn Rand wrote in 1972. “They come to be accepted by degrees, by dint of constant pressure on one side and constant retreat on the other until one day they are suddenly declared to be the country’s official ideology.”

Four decades later, her prophecy has been fulfilled. Sustainability is one of the three priority themes in the new Australian curriculum, polluting everything from algebra to zoology.

“The sustainability priority is futures-oriented, focusing on protecting environments and creating a more ecologically and socially just world through informed action,” the curriculum says.

Students are encouraged to consider “that unlimited growth is unsustainable; sustainability – that biological systems need to remain diverse and productive over time; and rights of nature – recognition that humans and their natural environment are closely interrelated”.

Sustainability is Malthusianism for the 21st century: the fallacy that population is growing faster than the available resources and that ruination is just around the corner.

The world viewed through the prism of sustainability is a deeply depressing place in which dreams are discouraged, imagination is restricted and the spirit of progress frowned upon.

Sustainability means never having to say sorry. In 1990 the World Hunger Project calculated that the ecosystem could sustainably support six billion people, and then only if they lived on a vegetarian diet.

More than two decades later, with 7.1 billion people living on the planet, global beef production has increased by 5 per cent per capita, pork by 17 per cent and chicken by 82 per cent, and that’s not counting the eggs.

The World Food Programme estimates that there are 170 million fewer malnourished people than there were in 1990.

The inconvenient prosperous truth is that the human beings have, since the dawn of time, created more than they used on average over the course of a lifetime.

The happy by-product of an expanding population ever more interconnected is that the sum total of human knowledge grows exponentially.

The energy crisis, the one that is supposed to lie just around the corner, has been creating anxiety since the 1600s when Britain began to run out of firewood. Scarcity spurred the development of coal. The great whale oil crisis of the 1840s stimulated the search for oil. Time after time the coming catastrophe is postponed through abundance, and the inherent dishonesty of sustainability is exposed.

Human ingenuity is an infinitely renewable resource. Prosperity comes from seizing the elements of nature and rearranging their form.

“Wealth does not exists as a fixed, static quantity,” wrote Rand. “It is the creation of a dynamic, boundless mind. And it has no inherent limitation.”

Bitten by the dispiriting dogma of sustainability | The Australian

Sustainability is Malthusianism for the 21st Century | Climatism