← 167 Years Ago Today : Bushfires Burn 5 Million Hectares or A Quarter Of Victoria
THE Fantasy Of Accelerating Sea Level Rise Just Got Hosed →

SNOWFALL Will Become “A Very Rare And Exciting Event…” 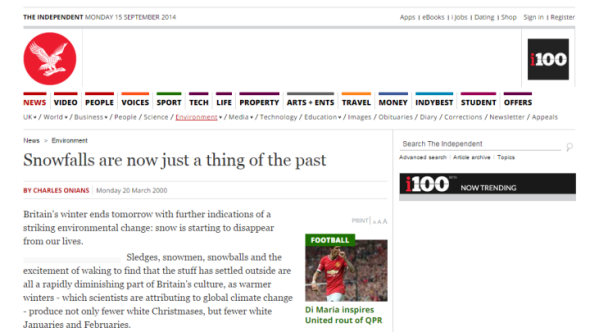 ONE of the more classic instances of climate change fear-mongering, gone horribly wrong, direct from the mouth of esteemed climatologist Dr David Viner of the UK’s CRU, circa 2000.

THE catastrophic dud-prediction was reported by Charles Onians in the Independent’s most cited (now deleted) article – Snowfalls are now just a thing of the past:

However, the warming is so far manifesting itself more in winters which are less cold than in much hotter summers. According to Dr David Viner, a senior research scientist at the climatic research unit (CRU) of the University of East Anglia,within a few years winter snowfall will become “a very rare and exciting event”.

SINCE Viner’s vapid verbal, Europe and much of the Northern Hemisphere has experienced some of the coldest winters on record, especially over the past five years, with plenty of snow to boot…

MOSCOW saw more than half its average monthly snowfall in the space of 24 hours with 17 inches blanketing the capital by Sunday morning. At least one man was killed, several injured and about 2000 trees collapsed due to the heaviest snowfall in Moscow since the beginning of the weather records, said meteorologists.

WILL the casualties be recorded as human CO2-induced, climate change related? Or, do only “extreme heat” casualties make the cut?

THE Independent wasn’t alone in its failed snowfall predictions. Our most ‘trusted science’ agencies were parroting the same warmist propaganda…

AUSTRALIA’S ‘premier’ scientific body, the (warmist) CSIRO, jumped on the “end of snow” bandwagon in August 2003:

The low impact scenario for 2020 has a minor impact on snow conditions. Average season lengths are reduced by around five days. Reductions in peak depths are usually less than 10%, but can be larger at lower sites (e.g. Mt Baw Baw and Wellington High Plains).

The End of Snow? – NYTimes.com

AND yet, climate realists (sceptics) are still smeared and slimed as the climate “deniers”. Rather telling when one considers the real-world evidence at hand.