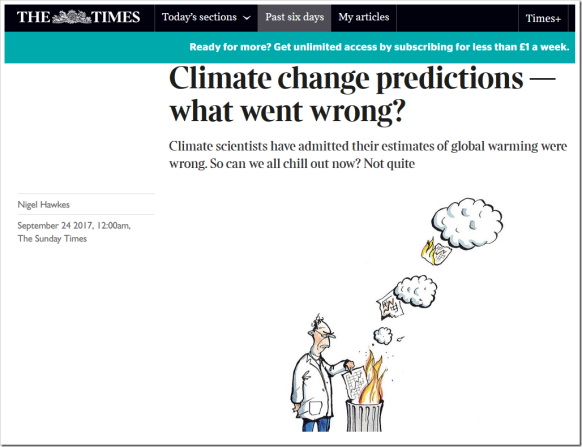 AS egg-on-face moments go, it was a double-yolker. Last week a group of climate scientists published a paper that admitted the estimates of global warming used for years to torture the world’s conscience and justify massive spending on non-carbon energy sources were, er, wrong. | THE TIMES

IN February 2016, climate scientist Dr. John Christy presented testimony to Congress demonstrating that the UN IPCC’s CMIP5 climate models grossly exaggerate and over estimate the impact of atmospheric CO2 levels on global temperatures. Dr. Christy noted in his testimony that “models over-warm the tropical atmosphere by a factor of approximately three″.

A landmark paper by warmist scientists in Nature Geoscience now concedes the world has indeed not warmed as predicted, thanks to a slowdown in the first 15 years of this century. One of its authors, Michael Grubb, professor of international energy and climate change at University College London, admits his past predictions of runaway warming were too alarmist.

“When the facts change, I change my mind. We are in a better place than I thought.”

ANOTHER author, Myles Allen, professor of geosystem science at Oxford, confessed that too many of the mathematical models used by climate scientists to predict future warming “were on the hot side” — meaning they exaggerated.

“We haven’t seen that rapid acceleration in warming after 2000 that we see in the models.” 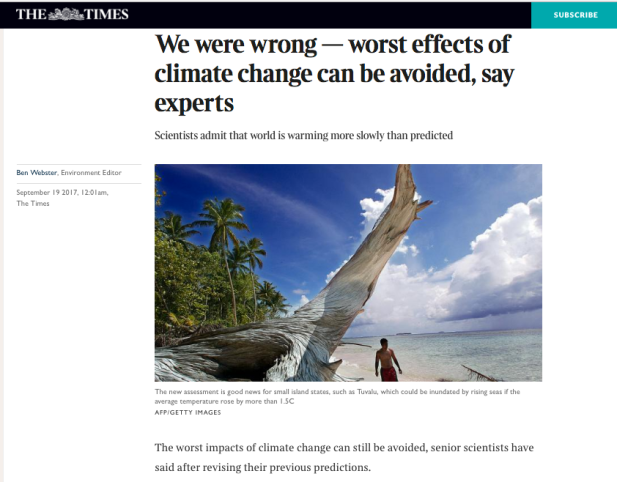 SO, the sceptics – the “climate deniers” – were spot-on, again. 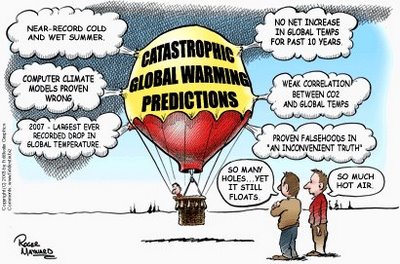 AND yet we have spent literally trillions of dollars of other peoples’ (taxpayers) money on alarmist climate change policies, schemes and rent-seeking scams (windmills, solar panels, mothballed desal plants, pink bats, carbon taxes etc) on the advice of overheated, predictive computer models that do not even observe real-world reality!?

DON’T expect an apology or your money back anytime soon. The climate juggernaut will keep digging at your hip pocket a little while longer – too much money is on the line and too many reputations are now at stake.

Via NOT A LOT OF PEOPLE KNOW THAT :

The pause is alive and well!

There has been a desperate attempt to divert attention away from the findings of the new paper. This article mentions a letter to the Times by the phoneys, Lords Krebs and Stern.

I have also seen a similar letter in the Mail from Myles Allen. It stated that the difference of 0.3C was really rather insignificant, and that we were still all going to die if we did mend our evil ways, only slightly later!

But the difference is actually really huge, bearing in mind that this is over a period of just 15 years, and particularly when the authors admit that emissions of CO2 have been much greater than originally assumed.

Climate change predictions — what went wrong? | NOT A LOT OF PEOPLE KNOW THAT

97% Of Climate Scientists Got it Wrong Related :

The Writing Was On The Wall :