THIS is a must read if you’re interested in natural climate change and its localized effect on coral reefs, versus the alarmist global climate propaganda spewed by the dishonest and alarmist climate change cabal.

Jim Steele nails it in this fabulous post here…

Recently Dr. Terry Hughes published the paper Global Warming and Recurrent Mass Bleaching of Corals (henceforth Hughes 2017) and concluded “immediate global action to curb future warming is essential to secure a future for coral reefs.” However, his conclusions are simply not borne out by his evidence. Uncritically blaming global warming, is bad science. Organisms are only affected by local conditions, not a chimeric global average. Believing global warming accounts for everything, Hughes failed to see the critical natural factors that locally drove the Great Barrier Reef 2016 bleaching event.

Although researchers agree coral undergo thermal stress when temperatures exceed 1 to 2°C of their local summer maximum, there has been no trend in maximum summer temperature in the northern Great…

Wow. Mother Nature at her most amazing, deadly and dangerous.

We live in unprecedented times. It used to be that satellite images were sent via WeFax…now, we can look at the “instant replay” in a matter of minutes after Harvey is downgraded to a tropical storm. Images and video from NOAA GOES-16 data.

“Team warming’s climate simulations have not only failed to predict America’s prolonged hurricane drought, but also the full gamut of extreme weather events which have been on the whole historically benign. They’d do better tossing coins.”

Parts of Texas are in for a walloping.

The National Weather Service described the hurricane as “about as fierce as they come” … and they are right.

Hurricane Harvey is severe, entirely natural — and not unprecedented. 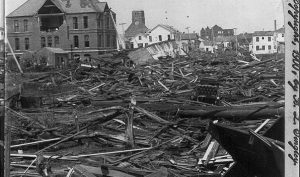 The practice of naming hurricanes was not yet in vogue, but this category four hurricane didn’t need a name to become a true human tragedy.

The storm brought 145 mile per hour winds and a 15 foot storm surge which flooded the city.

Estimates range from 6,000 to 12,000 dead. The loss of life was so extreme that Texans couldn’t cope with the sheer number of bodies. They were forced to resort to mass graves, barges for mass burials at sea, and…

“This list reminds us how awful things were. Apart from the horrendous 2004/2005 years, we have been pretty lucky in recent decades.

Anyone blaming Harvey on global warming doesn’t have a leg to stand on.”

Facts and data won’t appease climate ambulance chasers. Far too many reputations, jobs and money are now at stake.

Th 12 year drought of major hurricane landfalls in the U.S. is over, with catastrophic impacts in Texas.  Predictions of Hurricane Harvey illustrate the realization of extended- and long-range hurricane forecasts.