2017 Global temperatures are leveling off – near 1980 temperature anomaly

“It’s a tough business to be in when your CO2 driven “climate change” can’t get there unless a natural ENSO event pushes up the temperature for you.”

Could also give Gavin a buzz and have him work some GISS magic, to warm things up a notch.

From the “dashed hopes for the warmest year evar!” department comes this update from Dr. Ryan Maue on the global surface temperature: 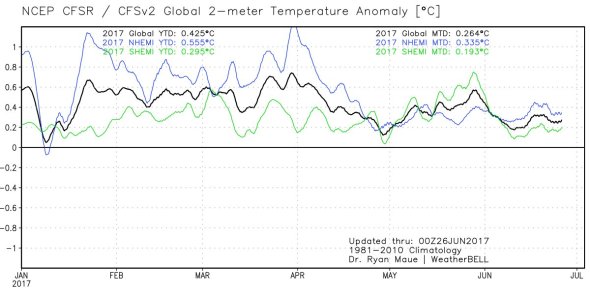 Tropical vs. non-tropical temperature anomalies have balanced out mostly for the past few months. No El Niño suggests continued T levels: 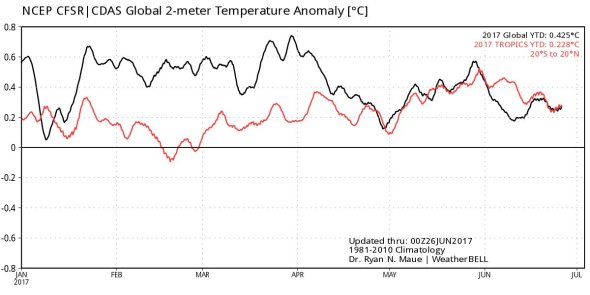 In a nutshell what Dr. Maue is saying is that without a strong El Nino event to boost temperature, global temperatures are stabilizing around +0.26°C. FYI, NCEP data used in these plots is from the NOAA National Centers for Environmental Prediction. The data is available here: http://cfs.ncep.noaa.gov/cfsr/downloads/

Recently, we covered a story from the Australian Bureau of Meteorology (BoM) that called off their El Niño watch. BoM says: