2017 Global temperatures are leveling off – near 1980 temperature anomaly

“It’s a tough business to be in when your CO2 driven “climate change” can’t get there unless a natural ENSO event pushes up the temperature for you.”

Could also give Gavin a buzz and have him work some GISS magic, to warm things up a notch.

From the “dashed hopes for the warmest year evar!” department comes this update from Dr. Ryan Maue on the global surface temperature:

Tropical vs. non-tropical temperature anomalies have balanced out mostly for the past few months. No El Niño suggests continued T levels:

In a nutshell what Dr. Maue is saying is that without a strong El Nino event to boost temperature, global temperatures are stabilizing around +0.26°C. FYI, NCEP data used in these plots is from the NOAA National Centers for Environmental Prediction. The data is available here: http://cfs.ncep.noaa.gov/cfsr/downloads/

Recently, we covered a story from the Australian Bureau of Meteorology (BoM) that called off their El Niño watch. BoM says:

TURKISH ‘Power Ship’ Proposed To Keep The Lights On In South Australia!

What do all these countries have in common? They are all third world, mostly war-torn countries who have relied on ship-mounted power plants to overcome chronic electricity shortages. 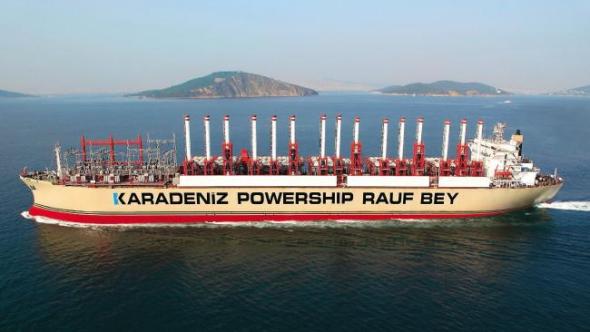 A Powership as displayed in the Karpowership Brochure

The “power ship” barge is owned by Istanbul-based firm, Karpowership and comprises 11 towering steel stacks or chimneys that resembles a sort of floating Battersea power station.

A 250 MW ship-based power station is under consideration as a solution to the crisis for the Australian state, which has seen an over-investment of ‘unreliable’ energy – wind and solar. While cheap, reliable, baseload fossil fuel power stations were retired (blown up)…

Playford coal-fired power station in Port Augusta — put out of business by Labor’s green policies — had its towers brought down by explosives.

What does this say about the Jay Weatherill Socialist/Green/Labor SA government and its insane global warming policies?!

Opposition politicians are critical of the move, saying that using such ships, typically sent to war ravaged regions, shows the government’s poor decision making on power policy, linking it to the increase in residential electricity bills.

If it weren’t so serious for the livelihoods of South Australian’s and their flailing economy, it would be hilarious.

* I genuinely thought this article was a parody on the SA energy debacle when I first read about it via our friend’s over at Tallbloke’s Talkshop!

You literally can’t make this stuff up…

A large-scale temporary power solution is being considered, as South Australia struggles to ensure its energy security.

A 250 MW ship-based power station is under consideration as a solution to the crisis for the Australian state, which has seen a lot of investment in renewable power over recent years, while old fossil stations were retired.

The Turkish ship could be operational by the end of the year for less than the $360m budgeted for a new state-owned gas-fired power plant of the same capacity.

The ship-based plant would plug into the high-voltage grid near the 479 MW Pelican Point power station, which returns to full capacity on July 1.

A second option would be for a 125 MW Powership at Outer Harbor and another of the same size anchored off Port Augusta, plugging into the grid near the site of the defunct Northern power station.

The Powership fleet can operate on natural gas, liquid natural gas or heavy fuel oil and it is likely the ship would be leased until a permanent plant was built.

The Istanbul-based firm, Karpowership, has installed the barge or ship-mounted power plants in Ghana, Iraq, Lebanon, Indonesia, Zambia, and Mozambique.

A national electricity market operator report released this week reveals a government-backed battery, temporary generators and every power station in the state must be up and running in tandem to prevent blackouts in the state this summer.

Adelaide Now online reports that opposition politicians are critical of the move, saying that using such ships, typically sent to war ravaged regions, shows the government’s poor decision making on power policy, linking it to the increase in residential electricity bills.