← Uh oh: Study says ‘collapsing’ Thwaites Glacier in Antarctica melting from geothermal heat, not ‘climate change’ effects
Why would it be different this time? →

“CO2 Reaches A Tipping Point” despite the fact there’s been NO atmospheric global warming for nearly 20 years, with record anthropogenic CO2 emissions over the same period.

And despite the fact that climate change alarmist institutions NASA and CSIRO et al., have begrudgingly admitted that man’s addition of colourless, odourless, trace gas and plant food CO2 is actually “greening” the planet.

Which is good news because historically, we live in a dangerously low CO2-starved environment. 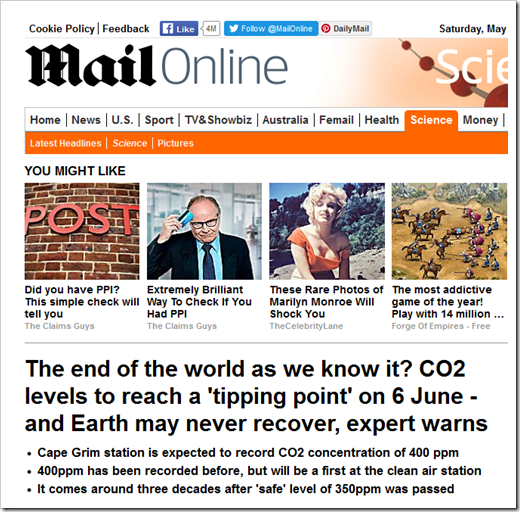 We’re all going to die! From the Mail:

6 June may sound like an insignificant date to many, but it could mark a ‘tipping point’ in the world’s history, an expert has warned.

An atmospheric measuring station at Cape Grim in Tasmania is expected to record a carbon dioxide (CO2) concentration of 400 parts per million (ppm) on or around this day – a significant number marking a climate change milestone.

While 400ppm has been recorded before, the Tasmanian location is regarded as one of the cleanest air sources in the world, so such levels of pollution are said to be a real blow.

The measure is an indicator of the amount of planet-warming gases being pumped into the atmosphere at record rates and the concentrations are the highest in millions of years.