But but but what about wind and solar ? Aren’t they ‘the future’? Or are they just symbols of the fashionable deep-green “save the planet” fantasy that are completely incapable of supplying cheap, reliable, 24/7 base-load power? 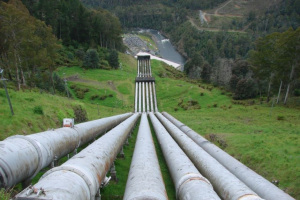 Hydro power in Tasmania [image credit: ABC Rural]
Tasmania has got itself into a power generation mess and has been forced into expensive emergency measures to ‘keep the lights on’, reports PEI. For more background on the policies that led to this situation, see here.

The government of Tasmania believes a decision to use diesel power generation on a temporary basis can prevent power blackouts, despite present and ongoing difficulties with its power infrastructure.

The island’s Basslink subsea cable, a vital interconnection with Australia, has been under repair since breaking in December, while drought has reduced water for its hydroelectric power facilities to record lows.