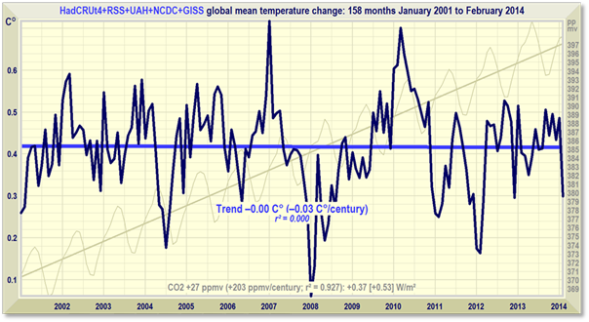 As you trawl through all the global warming scare stories this week, remember this bottom-line fact – there has been no warming of the atmosphere this century:

Our dataset-of-datasets graph averages the monthly anomalies for the three terrestrial and two satellite temperature records. It shows there has still been no global warming this millennium. Over 13 years 2 months, the trend is zero.

The warming may resume after a hiatus that so far has lasted some 16 years, but we simply are not getting the temperature rises the climate models predicted.

Exactly how many more billions does Labor want to waste making no difference to global temperatures, which haven’t risen in 16 years anyway?

Campaigning in Perth before the West Australian Senate election on Saturday, Prime Minister Tony Abbott seized on Mr Butler’s remarks, arguing they were a sign Labor was not just going to keep the carbon tax, but increase it…

The independent Climate Change Authority, which the government plans to abolish, said in February Australia should adopt a minimum target of 15 per cent by 2020 and its 5 per cent target was out of step with countries including China and the United States.

Mr Butler said: ‘’It [the authority report] does make the point that the conditions for 15 per cent have been met.

‘’For example, similar countries have targets of 15 per cent. It’s quite clear 20 per cent hasn’t been met but it is strongly arguable 15 per cent has been met.’’

And can we clarify this furphy that the Climate Change Authority is “independent”? In fact, Labor stacked it with extremists and sympathisers who can’t be sacked:

Tell me why the authority members include Clive Hamilton, a professor of public ethics who is a former Greens candidate and absurd catastrophist? Why on earth should we listen to him?

Tell me why it includes militant warmist David Karoly, with his history of predictions?

Why does it include John Quiggin, a warmist who had to admit to having grossly exaggerated the difference our carbon tax could actually make?

See also : Before you read the upcoming IPCC report, note this | Climatism

Agenda of the United Nations and the Political Elite :