Government scientists weren’t convinced that the public would buy the global warming scam if global temperature graphs showed that the 1930’s were comparably the hottest decade of the 20th Century. So they cooled the past, and warmed the present…

NOAA/CRU/NASA erased the post-1940 cooling, just like they said they were going to do in their private E-mails. (Real Science)

They did exactly what Wigley was suggesting, removing more than 0.15 C from 1940′s global temperatures. This tampering is what made the hockey stick possible :

Government scientists did the same thing with the ‘inconvenient’ Medieval Warm Period :

In the 1990 IPCC report, the Medieval Warm Period was much warmer than the late 19th century. 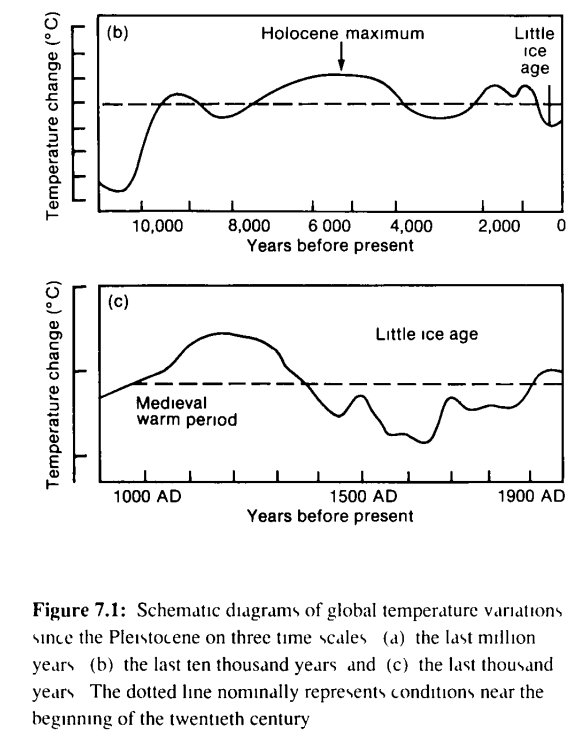 But in the 2001 IPCC report, the Medieval Warm period disappeared and became much cooler than the late 20th century. 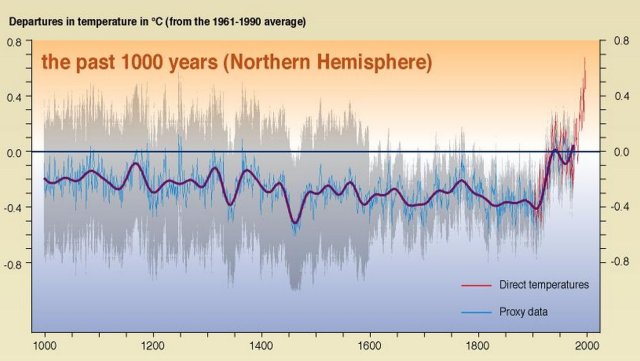 By pure coincidence, in the year 1995 the IPCC made a decision to make the Medieval Warm Period disappear.

In case you missed it …

I had another interesting experience around the time my paper in Science was published. I received an astonishing email from a major researcher in the area of climate change. He said, “We have to get rid of the Medieval Warm Period.”

The existence of the MWP had been recognized in the scientific literature for decades. But now it was a major embarrassment to those maintaining that the 20th century warming was truly anomalous. It had to be “gotten rid of.”

NOAA/CRU/NASA/Muller have wiped out the 1940-1970 cooling, but the historical record shows that their hockey sticks are complete crap.

In 1940, the Arctic was rapidly melting. Greenland glaciers were “nearing a catastrophe”

The Arctic had warmed six degrees, and sea ice had thinned dramatically

By the early, 1970’s, the arctic had cooled dramatically, glaciers and sea ice were expanding.

NOAA/CRU/NASA/Muller have erased the post-1940 cooling, just like they said they were going to do in their private E-mails.

Climate Scientists 95% Sure The Science Is Unsettled

There has been no atmospheric global warming, at all, for 17 years and 5 months, despite 35% of all human CO2 emissions, since 1751, emitted over the same period.

Satellites show no global warming for 17 years 5 months | Watts Up With That?

The global warming “pause” has become one of the biggest mysteries in climate science. A thorn in the side of the IPCC and the warmist community who assured us that the atmosphere would warm if ‘business as usual’ greenhouse emissions continued.

They were wrong. And their state-of-the-art, billion dollar climate models, which governments base policy decisions on have failed miserably.

95% of CMIP5 Climate models bear no resemblance to reality and remain scandalously overheated.

95% of Climate Models Agree: The Observations Must be Wrong « Roy Spencer, PhD

There have been at least eight separate explanations for the standstill in global warming, with the latest from UNSW Professor Matthew England, claiming “Stronger than normal trade winds in the central Pacific are the main cause of a 13-year halt in global surface temperature increases …”. His paper released, three years after he accused sceptics of “lying that the IPCC projections are overstatements”.

With no consensus and little confidence as to what is actually driving the current 17 year global warming ‘Hiatus’, how does the IPCC conclude in their latest AR5 assessment report, that they are ‘even more confident’ (95%) that human’s are to blame for global warming that stopped in 1998?

Their confidence in man-made global warming has increased, even as temperatures have declined. In fact, the last IPCC report to experience any warming was SAR in 1995

No Warming For 70% Of The IPCC’s History | Real Science

And yet they cry…

“The Science Is Settled”

“The Debate Is Over”

“If you deny climate change, you deny your grandchildren a future”

Andrew Bolt’s column in today’s Herald Sun, demonstrates how the 95% confidence meme, sounds more like another cleverly worded PR campaign out of the IPCC and warmist community, to promote the cause for draconian emissions controls.

Confusion should give alarmists pause for thought

YOU would think scientists of the NSW Climate Change Research Centre had done enough damage to their warmist crusade.

A month ago, its Professor Chris Turney got his ship of researchers stuck in Antarctic sea ice he had claimed was melting away.

“Sea ice is disappearing due to climate change, but here ice is building up,” Turney’s expedition wailed.

In fact Turney’s team — planning to examine parts of the Antarctic “highly susceptible to melting and collapse from ocean warming” — apparently hadn’t realised sea ice there had grown over three decades to record levels.

Turney’s climate centre, at the University of NSW, sponsored this disaster, which ended with two icebreakers rescuing the mortified professor and his warming crusaders.

It’s farce like that which helps explain why the CSIRO reported last week only 47 per cent of Australians buy its spin that the climate is changing and we’re to blame.

Australians now rate global warming of “low importance”, the CSIRO sighed, and warmists faced “the challenge of finding the right language” to gee them up. But up bobs another Climate Change Research Centre scientist to show the warmists’ problem isn’t the “right language” but the false hype.

Two years ago, Professor Matthew England appeared on the ABC’s Q&A to attack Nick Minchin, the former Howard government industry minister and a sceptic. Minchin had raised a puzzling fact: the planet had not warmed further since 1998.

“Basically we’ve had a plateauing of temperature rise,” he said. CO2 emissions had soared, but “we haven’t had the commensurate rise in temperature that the IPCC predicted”.

“What Nick just said is actually not true. The IPCC projections from 1990 have borne out very accurately.”

England later even accused sceptics of “lying that the IPCC projections are overstatements”.

So imagine my surprise when England admitted last week there had been a “hiatus” and “plateau in global average temperatures” after all. Startled readers asked England to explain how he could call sceptics liars two years ago for mentioning a “plateau” he now agreed was real.

England was defiant: “In terms of my comments on Q&A, I stand by them. Back then, the observations had not departed from the model projection range. In the past year or two, 2012 average and also 2013, that’s no longer the case.”

“Global warming quite clearly over the last decade hasn’t been actually occurring,” Fielding said, and showed Wong the temperature charts. Wong and her advisers — chief scientist Penny Sackett and climate scientist Will Steffen — said he was wrong. Journalists mocked him. Except, of course, the warming pause is now so obvious even England now admits it.

True, the warmists always have excuses and the ABC reports each without noting how the latest contradicts the last. Last week it reported England’s new paper explaining the warming pause: “Stronger than normal trade winds in the central Pacific are the main cause of a 13-year halt in global surface temperature increases …”

But only eight years ago the ABC reported the opposite: “The vast looping system of air currents that fuels Pacific trade winds … has weakened by 3.5 per cent over the past 140 years and the culprit is probably human-induced climate change.”