Richard Lindzen: Cool it on the climate

“We need to get some broad based support,
to capture the public’s imagination…
So we have to offer up scary scenarios,
make simplified, dramatic statements
and make little mention of any doubts…
Each of us has to decide what the right balance
is between being effective and being honest.“
– Prof. Stephen Schneider,
Stanford Professor of Climatology,
lead author of many IPCC reports

Professor Richard S. Lindzen, arguably the world’s most prominent climate scientist, testifies to the US House Committee on Science and Technology:

The evidence is that the increase in CO2 will lead to very little warming, and that the connection of this minimal warming (or even significant warming) to the purported catastrophes is also minimal. The arguments on which the catastrophic claims are made are extremely weak – and commonly acknowledged as such….

Current global warming alarm hardly represents a plausible proposition. Twenty years of repetition and escalation of claims does not make it more plausible. Quite the contrary, the failure to improve the case over 20 years makes the case even less plausible as does the evidence from climategate and other instances of overt cheating.

In the meantime, while I avoid making forecasts for tenths of a degree change in globally averaged temperature anomaly, I am quite willing to state that unprecedented climate catastrophes are not on the horizon though in several thousand years we may return to an ice age.

But this is about faith, not reason. 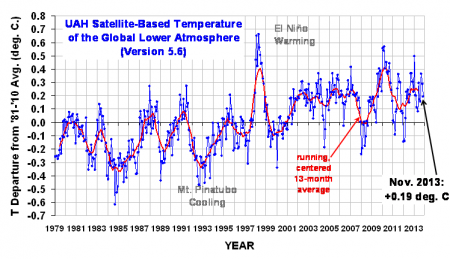 Global Warming: How to approach the science – Testimony Richard Lindzen 2010 – Via WattsUpWithThat