“Humanity is sitting on a time bomb. If the vast majority of the
world’s scientists are right, we have just ten years to avert a
major catastrophe that could send our entire planet’s climate system
into a tail-spin of epic destruction involving extreme weather, floods,
droughts, epidemics and killer heat waves beyond anything we have
ever experienced – a catastrophe of our own making.”
– Al Gore,
An Inconvenient Truth

“We are getting close to catastrophic tipping points,
despite the fact that most people barely notice the warming yet.”
– Dr James Hansen,
NASA researcher

“This planet is on course for a catastrophe.
The existence of Life itself is at stake.”
– Dr Tim Flannery,
Principal Research Scientist

“The world can decide in a fit of madness to kill itself,” announced Bob Geldof at the launch of the One Young World summit in Johannesburg. “Sometimes progress may not be possible.

“We’re in a very fraught time,” he added. “There will be a mass extinction event. That could happen on your watch.

“The signs are that it will happen and soon.”

Sir Bob, wearing his trademark sunglasses, addressed 8,000 One Young World delegates from 190 nations across the world in Soccer City, Johannesburg last night. He is a counsellor for the organisation, which hopes to inspire and create the next generation of global leaders.

The Live Aid founder and one-time Boomtown rat announced that his generation has let down the young people of today. “My generation has failed more than others. You cannot let your generation fail. The next war will not be a World War 1 or a World War 2, it will be the end.

The “generation [that] has failed more than others” contributes 12 parts per million or 0.0012% of carbon dioxide into the atmosphere. That is enough greenhouse gas to make the planet so sick that there has been no statistically-significant global warming for the majority of the satellite era or around 17 – 23 years :

If man’s contribution to CO2 concentration in the atmosphere is 3% and mother nature’s is 97%, does that mean mother nature has “failed” our generation 97% more than evil humans? (not that her or our CO2 has caused any warming, at all, over the past 15 years!

Facts and empirical evidence don’t mean much to Liberal eco-doomsters like Geldof. A stage and a ‘feel-good’ cause is where his ideologically blind “generation” is at.

Maybe Geldof should lose the aviators and take a look at the empirical evidence.

One giant leap for a rock star: Bob Geldof reveals he is to blast into space next year | Mail Online

Andrew Bolt of the Herald Sun sums up the extreme alarmism syndrome suffered by those residing in the tower of moral sanctimony :

Warming alarmists are growing even more hysterical, despite a failure of the world’s atmosphere to warm for 15 years …

The global warming faith has inspired enormous idiocy and scaremongering, in part because of the prophet’s licence – that a lie told to save humanity is a virtue.

Geldof: warming could wipe us out by 2030 – Herald Sun

Peer-Reviewed studies that confirm a lack of any recent global warming :

Quotes via The Green Agenda

Mark Twain popularized the saying “There are liars, damn liars, and statisticians.” After reading the recently-released [IPCC AR5] report, we can now add, ‘there are liars, damn liars, and IPCC.” When compared to the also recently published NIPCC (Nongovernmental International Panel on Climate Change) 1000+-page volume of data on climate change with thousands of peer-reviewed references, the inescapable conclusion is that the IPCC report must be considered the grossest misrepresentation of data ever published. As MIT climate scientist Dr. Richard Lindzen stated, “The latest IPCC report has truly sunk to the level of hilarious incoherence—it is quite amazing to see the contortions the IPCC has to go through in order to keep the international climate agenda going.”

After all these years, IPCC still doesn’t get it—we’ve been thawing out from…

The IPCC is the United Nations’ body most responsible for spreading panic about global warming and the body with a strong vested interest in keeping that panic alive.

According to findings from their latest climate report AR5, no longer can eco-catastrophists and climate alarmists casually link extreme weather with man-made greenhouse gas emissions or catastrophic climate events with ‘global warming‘.

IPCC not so confident we’re about to face catastrophes

The latest IPPC report dials down the alarm on so many scares that the likes of Al Gore and Tim Flannery peddled:

Note the first item on the list – the scare about the shut-down of the Atlantic meridional overturning circulation. This is the warming scare that inspired one of the most notorious eco-catastrophy movies:

(Thanks to reader the Original Observer.)

On the plus side, contrary to ongoing claims from that alarmist media mill side there are no mentions of tornadoes and hurricanes in the extreme weather events section. They give low confidence to tropical storm activity being connected to climate change, and don’t mention mesoscale events like tornadoes and thunderstorms at all. Similarly, they give low confidence to drought and flood attribution.

They’ve only talked about heat waves and precipitation events and being connected. From Page 4 of the SPM: 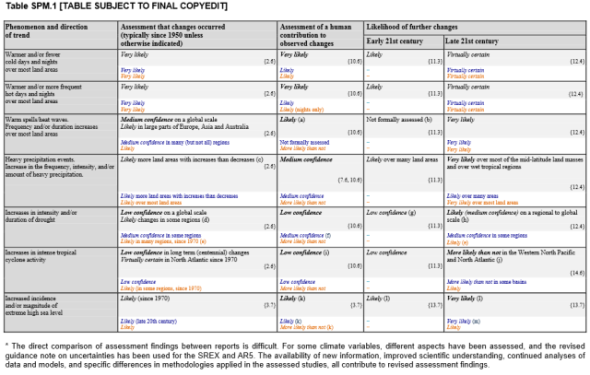 From Chapter 4 of the SREX:

Let’s hope this lack of attribution of severe storms to “man made climate change” in AR5 finally nails the lid shut on the claims of Hurricane Sandy, tornado outbreaks, and other favorite “lets not let a good crisis go to waste” media bleatings about climate change.

Better models are needed before exceptional events can be reliably linked to global warming.

…we can finally call it a dead issue.

Okay, they don’t do so in as many words. But in addition to being more confident than ever (despite a 16-year pause in warming and the growing mismatch between model projections and observations) that man-made climate change is real, they are also more confident nothing really bad is going to happen during the 21st Century.

As BishopHill and Judith Curry report on their separate blogs, IPCC now believes that in the 21st Century, Atlantic Ocean circulation collapse is “very unlikely,” ice sheet collapse is “exceptionally unlikely,” and catastrophic release of methane hydrates from melting permafrost is “very unlikely.” You can read it for yourself in Chapter 12 Table 12.4 of the IPCC’s forthcoming Fifth Assessment Report.

But these doomsday scenarios have always been way more fiction than science. For some time now, extreme weather has been the only card left in the climate alarm deck. Climate activists repeatedly assert that severe droughts, floods, and storms (Hurricane Sandy is their current poster child) are now the “new normal,” and they blame fossil fuels. Continue Reading »

State Of The Climate Report :

What more is required of mother nature to prove that humans 3% contribution to atmospheric CO2 (versus her 97%) is having no impact whatsoever on our climate? In fact, in most cases, the *opposite* is happening, to what the global warming alarmists, fear mongers, climate profiteers and complicit media have been preaching to us daily.