← Open Letter to the Honorable John Kerry U.S. Secretary of State
No Warming For The Majority Of The Satellite Era →

No steel roof required: IPCC dials back the fear of extreme weather

“Given that human actions are increasingly interfering with the delicate balance of nature, natural disasters such as floods, earthquakes and tsunamis will occur more frequently” – Dr Rajendra K Pachauri, IPCC Chief 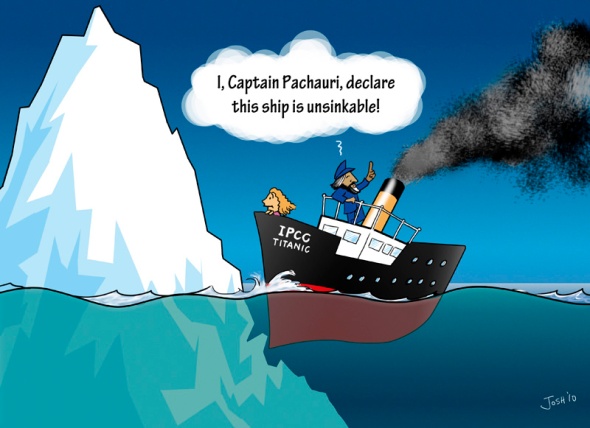 The IPCC have today released their full AR5 climate report after friday’s release of  the “The Summary For Policy Makers“.

The reports conclusions for extreme weather; droughts, floods, hurricanes, tornadoes etc remain basically unchanged from previous findings that were released last year in the IPCC’s SREX report (Special Report on Managing the Risks of Extreme Events and Disasters). Todays AR5 reports a level of “low confidence” that human greenhouse gas emissions have had any effect on extreme weather events.

Official IPCC Words from SREX report released 2012 : “We Do Not Know If The Climate Is Becoming More Extreme”

The IPCC is the United Nations body most responsible for spreading panic about global warming and the body with a strong vested interest in keeping that panic alive. So given the “low confidence” finding between climate extremes and human gases is coming directly from them, indicates just how much the perceived ‘problem’ of climate change has been grossly overstated.

The backflip on extreme weather reaffirms again how misleading the global warming cabal has been with regard to its alarmist fear-mongering and baseless climate alarmism. All the while, society gulled into spending trillions of dollars on junk science, mothballed desal plants, draconian carbon taxes and useless green energy schemes for literally nothing.

No steel roof required: IPCC dials back the fear of extreme weather

Professor Ross Garnaut in 2007, the very peak of global warming hysteria, told his local council he had to build a steel roof on his Melbourne home.

Garnaut, who wrote massive reports on global warming policy for the Rudd Government, argued he needed protection from the extreme weather he was sure we’d get from the change in the climate.

“Severe and more frequent hailstorms will be a feature of this change,” he wrote to the City of Yarra Council, explaining why he had to be excused from the council’s heritage overlay, which required slate roofs.

If I were Garnaut, it would not now read the full report of the Intergovernmental Panel on Climate Change released yesterday. Reading it would be mortifying. The report is like watching global warming alarmists swallow a chill pill.

It’s important to recall the context for this latest IPCC report – how global warming alarmists have for a decade warned of all kinds of extreme weather events that would smash our cities, kill our citizens and turn farmland into desert. Indeed, the iconic image of global warming was this poster, from Al Gore’s An Inconvenient Truth, exploiting the Hurricane Katrina catastrophe to whip up fear:

How many warming scaremongers whipped up the fear of mega droughts and savage storms?

Now for the chill pill.

It was embarrassing enough for the IPCC in the summary released last Friday to admit there has been a 15-year pause or dramatic slowdown in global warming, and that its climate models didn’t predict that or the increase in Antarctic sea ice.

But now the IPCC can’t be sure at all we’re suffering from many extreme weather events, either. It even admits its past warnings of more droughts were “overstated”.

On the hail that frightened Garnaut into demanding a steel roof:


In summary, there is low confidence in observed trends in small-scale severe weather phenomena such as hail and thunderstorms because of historical data inhomogeneities and inadequacies in monitoring systems.

In summary, the current assessment concludes that there is not enough evidence at present to suggest more than low confidence in a global-scale observed trend in drought or dryness (lack of rainfall) since the middle of the 20th century, due to lack of direct observations, geographical inconsistencies in the trends, and dependencies of inferred trends on the index choice. Based on updated studies, AR4 conclusions regarding global increasing trends in drought since the 1970s were probably overstated. However, it is likely that the frequency and intensity of drought has increased in the Mediterranean and West Africa and decreased in central North America and north-west Australia since 1950.

Table 2.13 shows that there has been a likely increasing trend in the frequency of heatwaves since the middle of the 20th century in Europe and Australia and across much of Asia where there are sufficient data. However confidence on a global scale is medium due to lack of studies over Africa and South America but also in part due to differences in trends depending on how heatwaves are defined (Perkins et al., 2012).

This combined with issues with defining events, leads to the assessment thatthere is medium confidence that globally the length and frequency of warm spells, including heat waves, has increased since the middle of the 20th century although it is likely that heatwave frequency has increased during this period in large parts of Europe, Asia and Australia.

In summary, there continues to be a lack of evidence and thus low confidence regarding the sign of trend in the magnitude and/or frequency of floods on a global scale.

On cyclones and storms:

In summary, this assessment does not revise the SREX conclusion of low confidence that any reported long-term (centennial) increases in tropical cyclone activity are robust, after accounting for past changes in observing capabilities…

In summary, confidence in large scale changes in the intensity of extreme extratropical cyclones since 1900 is low. There is also low confidence for a clear trend in storminess proxies over the last century due to inconsistencies between studies or lack of long-term data in some parts of the world (particularly in the SH).  Likewise, confidence in trends in extreme winds is low, due to quality and consistency issues with analysed data…

Over periods of a century or more, evidence suggests slight decreases in the frequency of tropical cyclones making landfall in the North Atlantic and the South Pacific, once uncertainties in observing methods have been considered. Little evidence exists of any longer-term trend in other ocean basins… Several studies suggest an increase in intensity, but data sampling issues hamper these assessments…

Callaghan and Power (2011) find a statistically significant decrease in Eastern Australia land-falling tropical cyclones since the late 19th century although including 2010/2011 season data this trend becomes non-significant (i.e., a trend of zero lies just inside the 90% confidence interval).

On the trouble with detecting trends in extreme weather events:

Changes in extremes for other climate variables are generally less coherent than those observed for temperature, due to data limitations and inconsistencies between studies, regions and/or seasons. However, increases in precipitation extremes, for example, are consistent with a warmer climate. Analyses of land areas with sufficient data indicate increases in the frequency and intensity of extreme precipitation events in recent decades, but results vary strongly between regions and seasons. For instance, evidence is most compelling for increases in heavy precipitation in North America, Central America and Europe, but in some other regions—such as southern Australia and western Asia—there is evidence of decreases. Likewise, drought studies do not agree on the sign of the global trend, with regional inconsistencies in trends also dependent on how droughts are defined. However, indications exist that droughts have increased in some regions (e.g., the Mediterranean) and decreased in others
(e.g., central North America) since the middle of the 20th century.

Remember, all these quotes come not from sceptics but from the IPCC, the United Nations body most responsible for spreading panic about global warming – and the body with a strong vested interest in keeping that panic alive.

This report should have had the words “Sorry we scared you” printed in big letters on the cover.  No steel roofs are required, after all. The future is not catastrophic. The fear-mongers must now be held to account.

The full IPCC report also makes much clearer than did the sanitised summary released on Friday that the computer models used to predict our climate are so flawed that they couldn’t even predict the last 15 years of essentially no warming. The IPCC admits they probably exaggerated the effect of man’s emissions on temperatures.

So why on earth should we trust them?

A separate posting on one of the IPCC authors, written by a reader, has been deleted. Several readers thought it unfair, and on reflection I am not sure it isn’t.

The discrepancy between simulated and observed GMST trends during 1998–2012 could be explained in part by a tendency for some CMIP5 models to simulate stronger warming in response to increases in greenhouse-gas concentration than is consistent with observations… This finding provides evidence that some CMIP5 models show a larger response to greenhouse gases and other anthropogenic factors (dominated by the effects of aerosols) than the real world (medium confidence). As a consequence, it is argued in Chapter 11 that near-term model projections of GMST increase should be scaled down by about 10% (Section 11.3.6.3). This downward scaling is, however, not sufficient to explain the model-mean overestimate of GMST trend over the hiatus period.

Another possible source of model error is the poor representation of water vapour in the upper atmosphere… However, this effect is assessed here to be small, because there was a recovery in stratospheric water vapour after 2005…

Almost all CMIP5 historical simulations do not reproduce the observed recent warming hiatus.

To finish, this comment from Ross McKitrick (environmental economist who famously debunked the infamous hockey-stick graph that catapulted the ‘Global Warming’ scare onto the world stage) sums up nicely the IPCC’s latest junk science report :

Posted on : Reactions to IPCC AR5 Summary for Policy Makers | Watts Up With That?

Posted on September 30, 2013 by stevengoddard

Judith Curry, chair of the School of Earth And Atmospheric Sciences at Georgia Tech, says the IPCC is taking a huge credibility hit over the hiatus – and its pronouncement that it is 95 percent certain that human activity is responsible for most global warming.

“I’m not happy with the IPCC,” she told Fox News. “I think it has torqued the science in an unfortunate direction.”

That torquing, she suggests, is because the money in climate science (the funding, that is) is tied to embellishing the IPCC narrative, especially the impacts of global warming. She is critical of the IPCC’s leadership as well, in particular its chairman, Rajendra Pachauri.

“They have explicit policy agendas,” Curry told Fox News. “Their proclamations are very alarmist and very imperative as to what we should be doing. And this does not inspire confidence in the final product.”

3 Comments on “No steel roof required: IPCC dials back the fear of extreme weather”