“The common enemy of humanity is man.
In searching for a new enemy to unite us, we came up
with the idea that pollution, the threat of global warming,
water shortages, famine and the like would fit the bill. All these
dangers are caused by human intervention, and it is only through
changed attitudes and behaviour that they can be overcome.
The real enemy then, is humanity itself.”
– Club of Rome,
premier environmental think-tank,
consultants to the United Nations (IPCC)

“The Earth has cancer
and the cancer is Man.”
– Club of Rome,
consultants to the United Nations (IPCC)

Oh Dear. The United Nations’ IPCC are back with another dose of fear-mongering and climate alarmism. The new statement comes after a highly embarrassing, since-retracted claim, that global warming could cause the Himalayan glaciers to disappear by 2035. The claim which featured in the IPCC’s 2007 assessment report (AR4) was sourced from a 2005 World Wildlife Fund publication.

Their latest statement, on the eve of the release of the newest edition of the ‘climate bible’, is of truly Himalayan proportions.

THE peak UN body on climate change has been dealt another humiliating blow to its credibility after it was revealed a central claim of one of its benchmark reports – that most of the Himalayan glaciers would melt by 2035 because of global warming – was based on a “speculative” claim by an obscure Indian scientist. Continue Reading »

Warmist CNN carried an apology from the IPCC chiefs in January 2010: 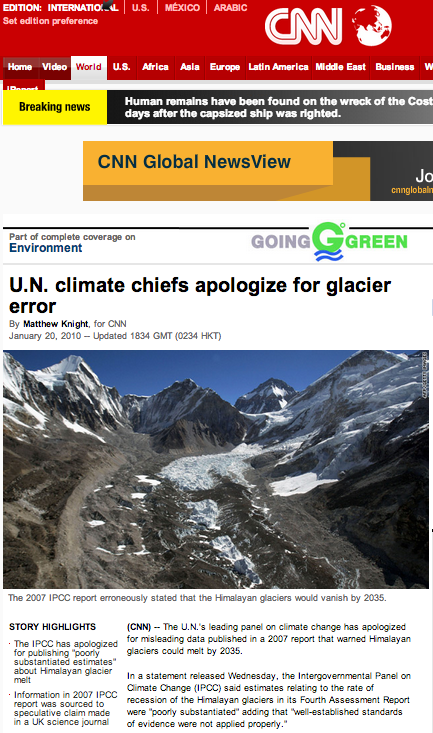 (CNN) — The U.N.’s leading panel on climate change has apologized for misleading data published in a 2007 report that warned Himalayan glaciers could melt by 2035.

In a statement released Wednesday, the Intergovernmental Panel on Climate Change (IPCC) said estimates relating to the rate of recession of the Himalayan glaciers in its Fourth Assessment Report were “poorly substantiated” adding that “well-established standards of evidence were not applied properly.” Continue Reading »

Fast forward to 2013, on the eve of AR5’s release, and the IPCC Himalayan alarmists return! 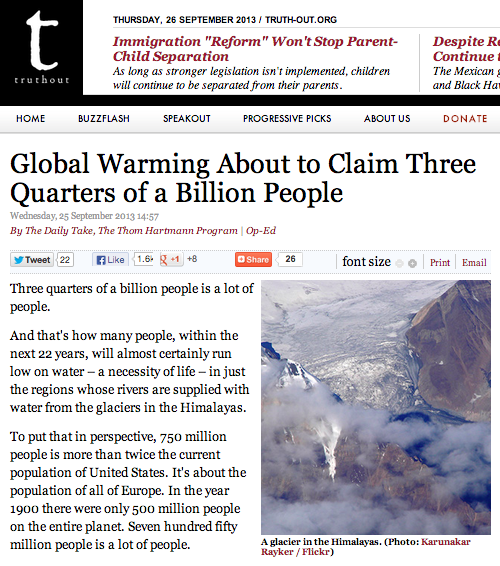 Global Warming About to Claim Three Quarters of a Billion People

The IPCC – the international body of scientists analyzing global climate change – is releasing its new report in stages over the next week and this early piece was reported on by the Financial Times on Monday. Under the headline “Climate Change Chief Sounds Alert on Himalayan Glaciers,” the opening sentence of the article by Pilita Clark summarizes a very tightly:

“The glaciers of the Himalayas are melting so fast they will affect the water supplies of a population twice that of the US within 22 years, the head of the world’s leading authority on climate change has warned.”

Global Warming About to Claim Three Quarters of a Billion People – Truthout 25 September, 2013

Does the IPCC have no shame? Have they not learnt from past mistakes? Or are there simply no limits to climate alarmism and fear-mongering when it’s all for a good cause?

If we take the words of Prof. Stephen Schneider, lead author of many IPCC reports, this latest Himalayan scare is nothing out of the ordinary and is really, par for the course :

“Apparently Pauchuri doesn’t think that he did enough damage to the reputation of the IPCC the last time round, and is going for a repeat performance.”

Hot Off The Press : Global Warming To Kill 750 Million People By 2035 | Real Science

Shock News : Nothing We Do Affects Sea Level

Climatism comment : Meanwhile over on the other coast, “No Surfer Under The Age Of 30 Has Ever Seen Any Sea Level Rise In California” 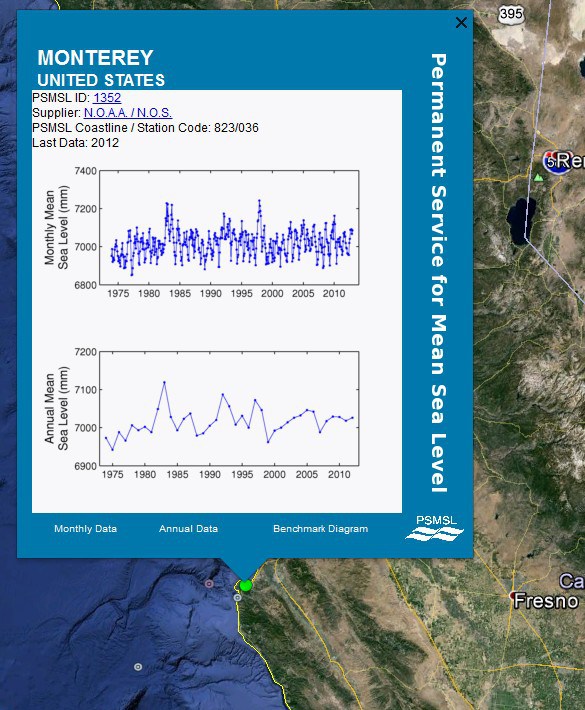 Data and Station Information for NEW YORK ( THE BATTERY)

On hundred fifty years of tide gauge measurements in lower Manhattan, tell us that humans neither accelerate nor slow the rise of the seas.

According to satellite measurements and peer-reviewed science, for 16 years and 9 months, there has been no Global Warming at all.

Peer-Reviewed studies that confirm the lack of any recent global warming:

Let’s See How The “Clean Energy Economy” Is Doing in Germany And Europe :

It’s a case of lose-lose all around, everyone — taxpayers, investors, renewables companies, gas companies — all lost. Waste and stupidity on a colossal scale.

The pattern is similar in the rest of the EU:

In fact, the German green revolution has been so successful they have just ‘test-fired’ five new coal-fired power plants with a combined capacity of around 4 GW.

And just in case the wind stops blowing or the sun is blocked by clouds of evil man’s 12 parts per million colourless, odourless, trace gas carbon dioxide, rendering their half a trillion €uro investment in windmills and solar panels useless, Germany have another 15 coal plants planned to open by 2020.

German Coal Fired Power Stations Due to Open By 2020

Steag GmbH started Germany’s first new power plant fueled by hard coal in eight years, allowing the generator and energy trader to take advantage of near record-low coal prices that have widened profit margins. The plant is the first new hard-coal-fired generator in Europe’s biggest power market since 2005. It marks the start of Germany’s biggest new-build program for hard coal stations since its liberalization in 1998. Ten new hard-coal power stations, or 7,985 megawatts, are scheduled to start producing electricity in the next two years, according to information from German grid regulator Bundesnetzagentur and operators. –Julia Mengewein, Bloomberg, 15 November 2013. Continue Reading »

But if “King Barack Hussein Canute” and his overreaching EPA have their way, energy prices will skyrocket, just like they have in Germany, Europe and Australia.

And if Obama and his overreaching EPA succeed in their quest to de-carbonise America, the “Clean energy economy” will become “an engine of [recession] for decades to come”.

German Chamber Of Industry and Commerce: Renewable Energy Driving Out 25% Of Industrial Companies

Yesterday I wrote 2 posts on the renewable energies folly in Germany, see here and here.

Now the German Chamber of Industry and Commerce (DIHK) confirms the mess with a press release and survey results of businesses and industries. The survey (see right) shows that energy prices and supply risks are threatening the ability of many German industrial companies to compete, and that many are now gearing up to move their operations to friendlier foreign locations.

In total, some 2400 companies of all sizes, sectors, and regions were surveyed throughout the country. Keep Reading »

British authorities have been issuing some dire-sounding warnings. In February, the man then in charge of Ofgem, Britain’s industry regulator, warned of an impending “near-crisis” of energy supply, calling the situation “horrendous” and likening it to being on a roller coaster headed “downhill—fast.” Deputy Minister Nick Clegg was quoted saying that he was working to “keep the lights on.” (See related quiz: “What You Don’t Know About Electricity.”)

In June, Ofgem released a capacity assessment warning that “risks to electricity security of supply over the next six winters have increased since our last report in October 2012.” The report warned that Britain’s ability to provide spare electric power capacity could plunge to between 2 to 5 percent, about half what it is now.

The main reason for the possible crunch: Britain is closing a number of aging coal-fired plants—as well as some oil and nuclear ones—to meet European Union environmental laws. One fifth of the existing power stations are scheduled to close over the next ten years. According to Reuters, the U.K. is set to lose more than 12 gigawatts of generating capacity in the next two years. Currently, the country operates 13 coal plants, but nearly half are slated to close by 2015, and all of them could be shut down by 2023, according to government figures.

As Coal Plants Shut Down, the United Kingdom Faces a Power Crunch

Germany’s Greens help the coal industry, while the US cut emissions by ignoring the greens

Oh the dilemma. German Greens have been so “successful” that coal use is rising fast. They helped get rid of the nukes in 2011, punished coal, and subsidized “renewables”. But woe…. energy has to come from somewhere, so the paradoxical crunch comes. Green policies mean that everyone is poorer, but the cheapest energy comes from coal …

The coal industry must be praying for more Green activism:

“IT’S been a black Christmas for green thinkers as Germany, the world leader in rooftop solar and pride of the renewable energy revolution has confirmed its rapid return to coal.

After scrapping nuclear power, Germany’s carbon dioxide emissions are back on the rise as the country clamours to reopen some of the dirtiest brown coalmines that have been closed since the reunification of east and west. The Australian. Continue Reading »

The twisted irony of the most ideologically aggressive ’Green’ nation on the planet, Germany, spending over 1/2 trillion €uros on ‘feel-good’ renewable energy, only to undertake the most aggressive expansion of ‘dirty’ coal fire power in her history!

That’s green logic for you.