According to 97% of the world’s top climate scientists, the Arctic will be ‘ice-free’ in a few days … 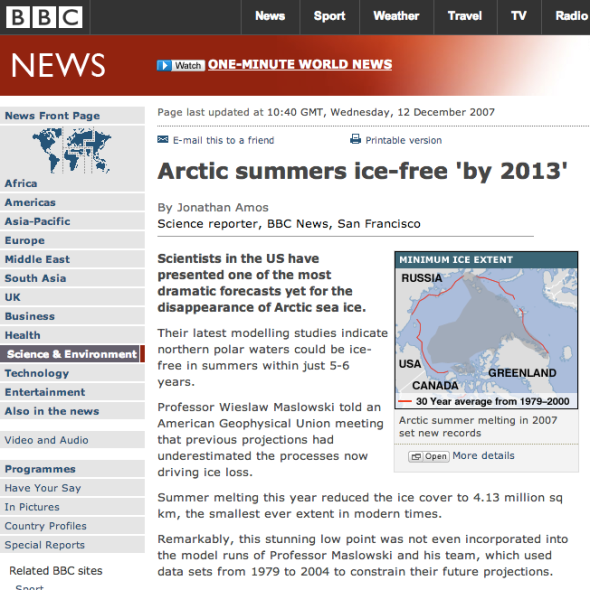 Will Steffen of Australia’s Climate Commission reports a melting arctic and The emission of methane from the Arctic Ocean will wreak financial havoc:

“Warming is strongest in the northern high latitudes … An example is the loss of Arctic sea ice, which contributes to the thawing of the permafrost under the East Siberian Sea.” “Recent observations show that methane is beginning to bubble up … as the Arctic sea ice continues to retreat and the region continues to warm.”

Climate Commission and Steffen taking full advantage of the latest climate hysteria. An alarmist prediction so bad, even Gavin Schmidt thinks it is implausible!

The ice is in a “death spiral” and may disappear in the summers within a couple of decades, according to Mark Serreze, an Arctic climate expert at the National Snow and Ice Data Center in Boulder, Colorado.

Arctic ice area has increased by almost 20,000 Manhattans from this date last year, making it the second largest increase on record. The only year which gained more ice was 1996.

2013 is the coldest Arctic summer on record:

This summer has seen the largest increase in sea ice area on record. August 8 ice area was 1.26 million km² larger than the same date in 2012, beating the old record increase set in 1996.

NOAA describes this record increase in ice as being a record loss.

Arctic Closed To Shipping – Too Much Ice

Since July 23, Arctic ice area loss has been the second slowest on record. Ice loss has been 61% of normal, and was just slightly faster than 2001.

Climate experts tell us that Arctic sea ice is thin, decayed, rotten, and screaming, and that it is all going to melt away quite suddenly during the next week.

Arctic Announces That It Is Very Angry At Dishonest Scientists

I just received this message from the Arctic

Government scientists shouldn’t claim 99% certainty of theorized cause and effect relationships – based entirely on preconceived notions and political prejudice.

Additionally, scientists who claim to be able to see the distant future are complete frauds.

Earth Blows Away The Record For Sea Ice Gain In 2013

The amount of thin, rotten, decayed, bald sea ice on Earth has increased by nearly 33,000 Manhattans since this date last year – almost doubling the previous record for annual ice gain.

Note that the amount of sea ice on Earth has increased during six of the last eight years.

NOAA says that these are the hottest years ever, and that the Arctic will soon be ice-free.

Green shows ice present in 2013 which was not present on this date in 2012. Red shows the opposite.

The Ministry Of Truth continues to lie about this :

This year’s melt rates are in line with a sustained decline of the Arctic ice cover, which has been monitored by NASA for several decades.

In the 1980′s the ice cap was about the size of the lower 48 states. It’s lost about half its size since then

Arctic ice extent is the highest since 2005 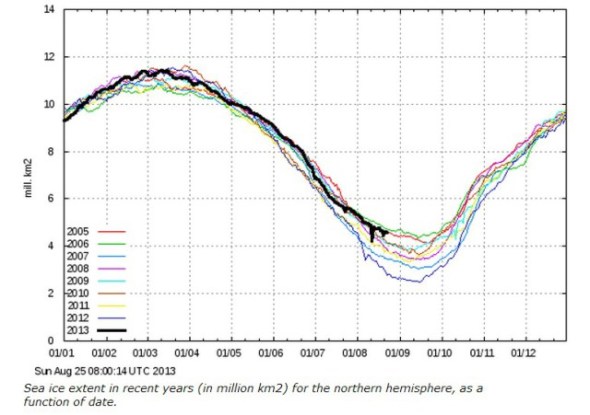 Green shows ice present in 2013 which was not present on this date in 2012. Red shows the opposite.

Arctic ice area has grown by 21,000 Manhattans since last year, the largest increase on record. 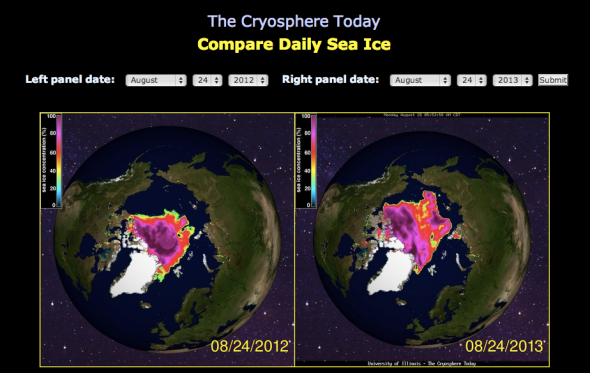 Earth has gained 2.2 million km² of sea ice since this date last year, wiping out the previous record gain of 1.1  million km² in 1994.

According to climate experts, polar ice loss is the canary in the coal mine for global warming, meaning that their junk science theory has flown the coop. All they are left with is newspaper and cable news excrement at the bottom of the cage.

Arctic Ice Almost As Extensive As It Was 42 Years Ago 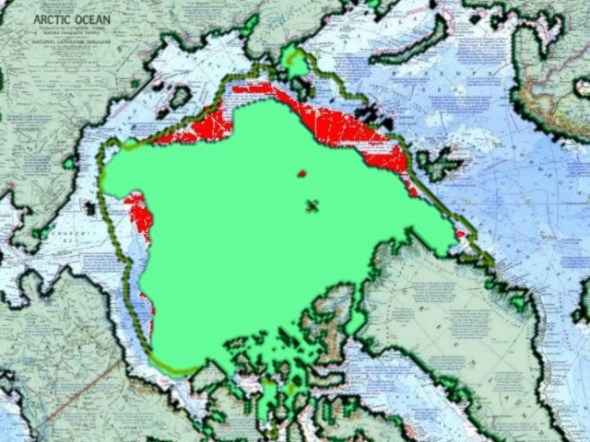 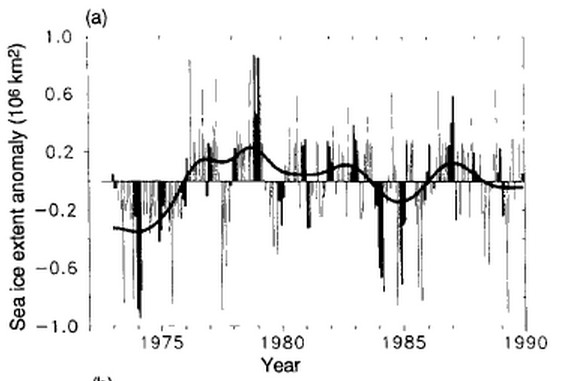 NCAR also noted that prior to 1972, ice extent was low.

In February of 1972 earth-orbiting artificial satellites revealed the existence of a greatly increased area of the snow and ice cover of the north polar cap as compared to all previous years of space age observations.

Alarmists want you to believe that there used to be a lot more ice, but they are lying.

Western Arctic ice coverage is higher than 1981, and is almost back to “normal.”

Arctic ice area the highest since 2006, and average ice area for the year to date is higher than 2006.

Arctic Alarmists Will Long For The Summer Of 2013

This summer has been a disaster for Arctic alarmists, but it is only going to get worse. The bulk of remaining ice is perfectly situated in the western Arctic to survive the winter and become multi-year ice.

Another cold summer like this one, and western Arctic ice will be back to what alarmists call “normal”  Look for great wailing and gnashing of teeth.

Planet Earth currently has 333,000 Manhattans of sea ice, which is more ice than on the same date in 1990. (Note that there was a small dip a few years ago which caused many leading scientists to become hysterical.)

Climate experts say that the poles are melting down, because they never look at any actual data.