“I don’t have much patience for people who deny climate change”
– Barack Obama,
US President

“I hope there are no climate-change deniers in the Department of Interior.”
– Sally Jewell, U.S. Interior Secretary

“How do we make a response to this climate challenge work in a way that’s healthy to the economy as well as addressing what is perhaps the greatest threat we have to the environment”
– Gina McCarthy, EPA Administrator

Obama Plans To End The Interglacial

Posted on August 27, 2013by stevengoddard 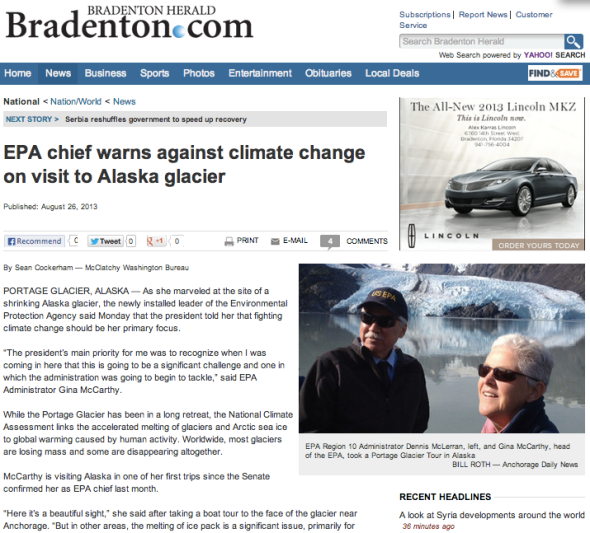 PORTAGE GLACIER, ALASKA — As she marvelled at the site of a shrinking Alaska glacier, the newly installed leader of the Environmental Protection Agency said Monday that the president told her that fighting climate change should be her primary focus.

“The president’s main priority for me was to recognize when I was coming in here that this is going to be a significant challenge and one in which the administration was going to begin to tackle,” said EPA Administrator Gina McCarthy.

Only a complete imbecile (i.e. Barack Obama) would believe that he could stop interglacial processes which have been going on for 20,000 years.

Sierra Club in need of a refresher course on the History and Geography of Glacier Bay Park, as documented by their founder John Muir, well before the SUV was invented 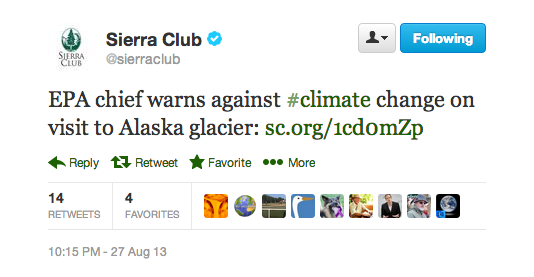 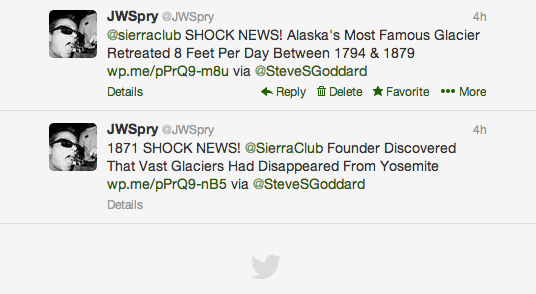 As you enter Glacier Bay in Southeast Alaska you will cruise along shorelines completely covered by ice just 200 years ago.

The glacier that filled Glacier Bay during the Little Ice Age began its retreat from the mouth of the bay more than 200 years ago and has exposed a magnificent fjord system about 100 km long. The massive glacier retreated past Sitakaday Narrows ~190 years ago, retreated past Whidbey Passage ~160 years ago, and reached the upper end of the main bay by 1860 (~140 years ago). There the glacier bifurcated and the multibeam data set terminates. The amount of fine sediment reaching the lower bay is largely restricted to local runoff and plankton debris. In addition, the currents through Sitakaday Narrows can be as fast as 7 kt, scouring the bottom of fine sediment. So a long history of morphologies is clearly visible on the bottom.

Are Sierra Club members aware of the extreme glacial retreats and significant climatic changes observed by their founder John Muir in the 19th century? Or like all global warming cult members, are they brainwashed into believing that the climate began in 1976?

Posted on September 2, 2013 by stevengoddard

It must have been Fred Flintstone’s SUV that ruined the glaciers. 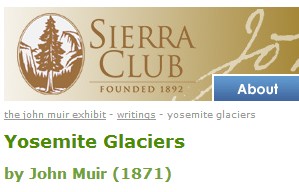 in my opinion future investigation will uncover proofs of the existence in the earlier ages of Sierra Nevada ice, of vast glaciers which flowed to the very foot of the range. Already it is clear that all of the upper basins were filled with ice so deep and universal that but few of the highest crests and ridges were sufficiently great to separate it into individual glaciers, many of the highest mountains having been flowed over and rounded like the boulders in a river. Glaciers poured into Yosemite by every one of its cañons, and at a comparatively recent period of its history its northern wall, with perhaps the single exception of the crest of Eagle Cliff, was covered by one unbroken flow of ice, the several glaciers having united before they reached the wall.

Obama calls people climate change ‘deniers’ because he wants to prove to the world and his estranged father that he and his unelected eco-fascist EPA, armed with economy wrecking draconian emissions controls, can change the climate and stop the interglacial process which has been going on for 20,000 years.